Please ensure Javascript is enabled for purposes of website accessibility
Log In Help Join The Motley Fool
Free Article Join Over 1 Million Premium Members And Get More In-Depth Stock Guidance and Research
By John Ballard - Mar 1, 2020 at 10:32AM

Despite new consoles launching from Sony and Microsoft, the Japanese game company has a strategy and important advantages to keep expanding the Switch installed base.

Nintendo (NTDOY -0.52%) is still selling plenty of Switch consoles, reaching an installed base of 52 million recently. But with Sony and Microsoft releasing the PlayStation 5 and Xbox Series X, respectively, this fall with much more powerful graphics capabilities, some investors may be wondering if Nintendo can keep growing its Switch installed base this year.

Nintendo has never been able to match Sony and Microsoft on technology, but that's fine. Management understands that people who buy Nintendo products do so for the game experiences and unique franchises like Mario and Zelda. That is just one of the four reasons Nintendo Switch should keep growing over the next few years. 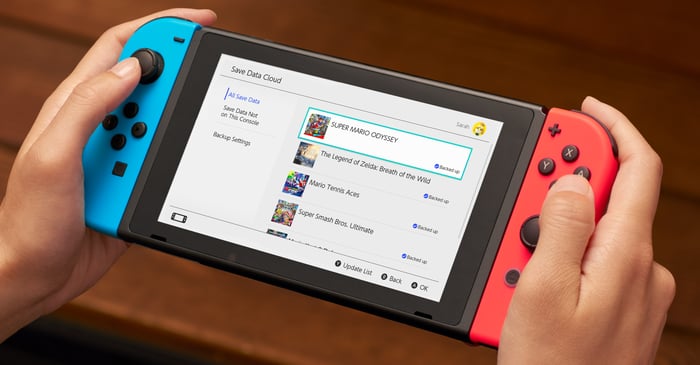 In the past, Nintendo has juggled its game development efforts around two platforms: a dedicated handheld, such as the 3DS, and a console system. The 3DS is about to disappear with unit sales of only 620,000 over the last three quarters. That is a decline of 73% year over year.

Meanwhile, the Switch enters its fourth year with an installed base of over 52 million. Because it brings together the best of both worlds (a console with the mobility of a handheld), management has decided to focus all of its software development resources on the Switch. President Shuntaro Furukawa believes this strategy will allow the system to "follow a course that is different from our previous Nintendo home consoles."

The company has no plans to release a new console in 2020. Instead, it has a long-term plan to continue making new games for the Switch. In the last earnings presentation, it stated that "new titles will be released continuously going forward," including titles from other companies.

Management isn't worried about competition, and shouldn't be, because Nintendo has the advantage of having closely protected rights to franchises like Mario, Luigi, Zelda, and many others that can't be played on any other game system.

The PlayStation and Xbox have more features and more-advanced graphics processing power, so the games look better. But the Switch is still selling well in the marketplace. In fact, it hit a new record for unit sell-through in a single month during December.

Nintendo believes it can stretch the life of the Switch longer than previous console cycles by continuing to promote the features that let you play on the go like a handheld. Management believes it hasn't "fully communicated" the special features of the Switch Lite, so there is still opportunity to grow the installed base of that system.

Along with that effort, Nintendo is aiming to keep Switch owners engaged with their game library longer by continuously adding new content to the games. For example, Super Smash Bros. Ultimate has been a huge hit, which is encouraging Nintendo to release additional fighters in the game.

The increased focus on digital content could lead to higher margins, fueling earnings growth and sending the stock higher over time. Digital sales were up 48% year over year through the first three quarters of fiscal 2020.

4. The China upside over the long term

Nintendo's exclusive franchises could lead to a huge payoff down the road through the partnership with Tencent to sell the Switch in China. Tencent is the largest game company in the world by revenue and knows how to sell games in its home market.

Still, this will be an uphill climb for Nintendo, because even though China has the largest gaming population in the world, players in that country are glued to PC and mobile games.

Furukawa acknowledged the challenge, stating, "As mobile and PC games make up the bulk of the Chinese market, we are working closely over the long term with Tencent to spread the appeal of Nintendo's unique software and the like."

Nintendo's senior executive officer, Satoru Shibata, made it clear that growth in China may take years to fully realize: "By actively working to raise awareness of Nintendo Switch, we would like to expand our business in China over the medium to long term."

The good news is that Nintendo doesn't need China to deliver returns for investors. But if the Switch catches on over time, Nintendo will be much more valuable than it is today.