Lowe's CEO has already accomplished much of what he wants to do with Lowes.com ... but for the company's biggest rival.

Lowe's (LOW 1.54%) CEO Marvin Ellison appears to have had his fill of subpar quarterly reports linked to the retailer's similarly subpar website. He even made a point of conceding to investors on the company's fourth-quarter revenue miss: "We have [web] traffic, but because functionality isn't great, you may not get the whole way to checkout." Much-needed improvements are in the works, including one-click purchasing and more relevant recommendations.

The assurance seemingly fell on deaf ears with investors consumed by coronavirus fears and looking past Ellison's plans as the stock shed 15% last week. They may want to make a point of taking a look, though, even before the dust of the coronavirus contagion settles. Many of the customer-centric technology improvements he's aiming for now were achieved by rival Home Depot (HD 1.75%) when he was serving as that company's executive vice president of stores.

You read that right. The person leading Lowe's now used to work for its primary rival, serving as an executive between 2002 and 2014. Perhaps more important, he's the person who oversaw a great deal of technological changes Home Depot made at a time when consumer-facing companies first started to take e-commerce very seriously.

Ellison's been there, done that

Home Depot was often criticized for waiting too long to fully embrace e-commerce, only turning up the visible heat in 2014 when the company finally made a conscious decision to spend more on its online capabilities at the expense of store openings. Investors who look closely, though, will see Home Depot was actually doing some rather clever things well before that point in an effort to support its web-selling presence. 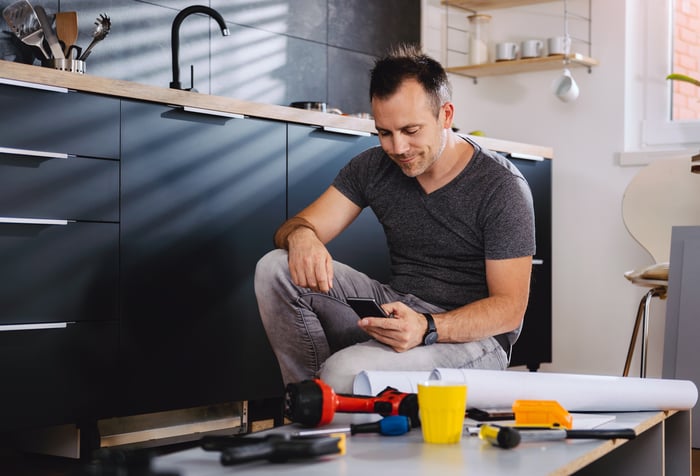 As an example, back in 2009, Home Depot execs admitted e-commerce mistakes made up until that point as a preamble to the company's first strategic, purpose-minded plan for HomeDepot.com that not only facilitated online sales but was a destination in and of itself. How-to tutorials would make it easier for consumers to get comfortable handling their own projects, and Home Depot finally understood that the look and feel of the website has to jive with the retailer's ads and stores.

These strategies seem obvious enough now, but that wasn't the case a decade ago.

Neither was (at the time) giving online shoppers the ability to make a purchase online and then pick up that item in a store. That didn't happen until 2011, and it wasn't until after that the company fully appreciated the upside. As it turns out, around half of those customers make additional purchases once in the store.

The retailer went mobile, too, and got downright savvy about it in 2012 when it made a point of telling mobile device users where their nearest store was when they saw a Home Depot ad on their device. By early 2014, in fact, Home Depot had gotten so good at e-commerce, it made the strategic decision to establish new distribution centers to take the load off of existing ones, setting the stage for even more online sales growth.

The grand finale: Although the initiative took shape after Ellison's departure, Home Depot committed $11 billion to a digital transformation strategy it's calling "One Home Depot," which is meant to carry the retailer past its legacy technologies and make it a fully digital-centric consumer company. One Home Depot is what it is largely thanks to the direction Ellison and his peers provided before that investment was put into motion.

Count on the man's experience

Don't misread the message. Ellison didn't transform Home Depot's e-commerce platform single-handedly. He was a key participant in the process, though, and certainly still learned from what his peers were doing even as he was handling the store-related parts of the transformation himself. There aren't many people in the world with more holistic experience doing what Lowe's is looking to do now than what Marvin Ellison has.

While it's certainly not a wholesale reason to step into a Lowe's position, if the home-improvement name's e-commerce struggles are a concern for you, they don't need to be. Ellison's going to get a handle on that piece of the business before long.