Please ensure Javascript is enabled for purposes of website accessibility
Log In Help Join The Motley Fool
Free Article Join Over 1 Million Premium Members And Get More In-Depth Stock Guidance and Research
By Amar Khatri - Updated Mar 2, 2020 at 10:16AM

The cancer-drug maker has a novel medicine that may provide growth opportunities in other areas of cancer.

Editor's Note: This article was updated to reflect that AstraZeneca announced on Jan. 20 that it received FDA priority review for Lynparza.

Cancer drug maker Clovis Oncology (CLVS -2.30%) has seen tremendous growth recently, with the stock up more than 57% in the past six months. The 11-year-old company is developing targeted therapies in various cancers including ovarian cancer, prostate cancer, and solid tumors.

Clovis has a successful ovarian cancer drug, Rubraca, which generated nearly $143 million in net revenue globally in 2019, representing a 50% increase year over year. It has the potential to be a first mover in another area of cancer outside of ovarian cancer, which could boost revenues and give it a leg up over its competitors including Pfizer (PFE 3.00%), AstraZeneca (AZN 3.80%), Merck & Co (MRK 1.23%), GlaxoSmithKline (GSK 2.20%), and Janssen, a part of Johnson & Johnson (JNJ 1.46%). Rubraca may be able to keep its rivals on their heels with this potential opportunity.

Here are the key takeaways. 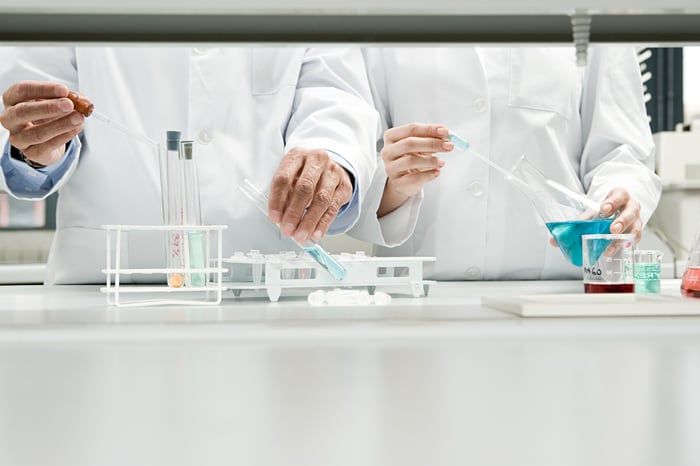 Rubraca was first approved to treat ovarian cancer by the U.S. Food and Drug Administration (FDA) in 2016. It is a poly ADP ribose polymerase (PARP) inhibitor. The company since expanded the use of the drug into more specialized forms of ovarian cancer.

Net product revenue for Rubraca in Q4 2019 was $39.3 million collectively from domestic and international markets; that's 30% growth year over year. The company faces stiff competition from pharma giants with their own PARP drugs: AstraZeneca/Merck (Lynparza) and GlaxoSmithKline/Janssen (Zejula).

The crowded U.S. market has led Clovis to expand into new markets in the European Union such as Germany, England, and Italy, where Rubraca is approved for use as a maintenance therapy in a more specialized form of ovarian cancer called recurrent ovarian cancer. The expansion into markets outside the U.S. has allowed Clovis to generate additional revenue streams and increased revenue in internatonal markets by $2.1 million from the previous quarter (Q3 2019). Further expansion of Rubraca for recurrent ovarian cancer in Spain and France for Q1 2020 will provide catalysts for growth over time.

On Jan. 15, Clovis announced that the FDA accepted its supplemental marketing application for approval of Rubraca for solid tumors in prostate cancer. This application is under priority review status, so Clovis should have a decision by May 15. An approval in prostate cancer would be a win for both the company and its investors. It would allow Clovis to be considered the first targeted therapy in the prostate cancer space. By having the first-mover advantage, the company could improve its brand recognition among clinicians and put its rivals on their heels.

The prostate cancer market is expected to have a compound annual growth rate of 3.3% and analysts forecast the market to be valued at $12.8 billion in eight major markets including the U.S., France, Germany, Italy, Spain, the U.K., Japan, and China. Clovis may be already ahead in this area of prostate cancer with its current marketing of Rubraca for ovarian cancer but an approval in prostate cancer could make it easier for the company to enter these markets based on its brand recognition.

AstraZeneca announced on Jan. 20 that its supplemental New Drug Application received priority review for Lynparza in the indication HRR-mutated metastatic castration-resistant prostate cancer. Merck plans to file for approval in the first half of 2020, while GlaxoSmithKline and Janssen are considered to be planning a submission this year. All these competitors have been awarded a breakthrough designation from the FDA in prostate cancer, which shows the immediate need for new therapies to treat this disease.

Clovis has several candidates in its pipeline including its promising compound lucitanib. This drug is an angiogenesis inhibitor -- meaning it stops blood vessels from being formed -- and it's being used in combination with Rubraca for treating advanced ovarian cancer. Another clinical trial with a different Clovis compound called rucaparib is being tested in combination with Bristol-Myers Squibb's immunotherapy nivolumab. These candidates show the company's promise in the field of oncology, particularly with advanced gynecologic cancers and other solid tumors. These trials are ongoing and investors should expect to see initial data later this year beginning mid-2020. The initial data from these results will provide another important area for Clovis to expand in the oncology space.

Clovis has a promising clinical trial in collaboration with 3B Pharmaceuticals, a privately held German biotechnology company, developing a targeted radiopharmaceutical therapy in solid tumors.

It is initiating a clinical study for a radiopharmaceutical therapy using a compound called FAP-2286. FAP is a protein expressed in more than 90% of cancers such as breast, lung, colorectal and pancreatic carcinomas. Clovis is planning to submit a investigational new drug application (IND) in the second half of 2020. The success of this study could allow Clovis to expand its pipeline into the oncology space focused on solid tumors.

Clovis is strapped with cash ending 2019, with $296.7 million in cash, enough for it to run operations until the second half of 2021. Investors should watch out for catalysts such as positive data from a combination study using the drug lucitanib later this year and clinical development for FAP-2286, a radiopharmaceutical therapy potential product candidate.

The growth into international markets as well as a potential approval from the FDA for treating prostate cancer are key areas investors should watch going forward. If Rubraca gets approved, Clovis will have a significant advantage over its competitors. If the company hits the ground running with a new indication and a first-mover advantage, investors could very well see an increase in its stock value.