With most of the world’s toys made in China, the coronavirus is a risk for production and toymakers’ sales.

Before the coronavirus turned into a full-scale public health emergency, toymakers appeared to be on the road to recovery following a difficult couple of years. Hasbro (HAS -0.36%), Mattel (MAT -1.16%), and others had suffered from the bankruptcy of Toys R Us as the retailer's shutdown meant the loss of a major seller of their toys. Concerns about the trade war between the U.S. and China, where about 70% of all toys are made according to IBISWorld research, didn't help matters.

As it turned out, toymakers managed the loss of Toys R Us, tariffs didn't crush earnings, and a rebound was afoot. The NPD Group, in a fall report, predicted total U.S. toy industry dollar sales would gain in 2020, and this positive momentum would continue through next year. But as the coronavirus outbreak worsened over the past few weeks, it became clear that 2020 may not be as bright for toymakers as some had hoped. 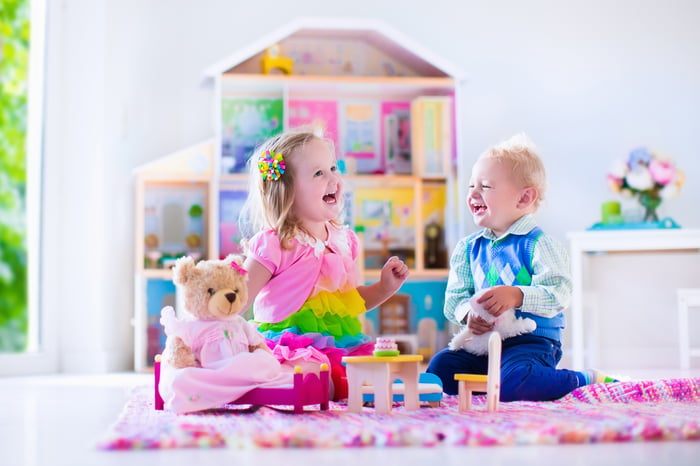 On Jan. 30, the World Health Organization declared the coronavirus a public health emergency of international concern. Many of China's factories have closed temporarily, and the government imposed quarantines that have kept workers home. With most industries producing at least some goods in China or selling products to Chinese travelers, the outbreak is bad news across the board.

But toymakers have an additional concern -- the holidays. Toy retailers can generate 30% of their annual sales during the holiday shopping season, according to The National Retail Federation. While Christmas may seem far off to most of us, Isaac Larian, CEO of privately-held toymaker MGA Entertainment, told Yahoo Finance television that for the 2020 holiday season, the damage has already been done. Chinese factories usually start holiday toy production in February and ship in April, he said. Considering the current situation, Larian expects toy industry sales to fall 6% to 8% this year.

Recent messages from Hasbro and Mattel weren't as grim. During Hasbro's latest earnings call, the company said there has been disruption to the supply chain, but so far, effects on the business are small. Hasbro also said it would make up for lost productivity in order to meet demand later in the year. During its earnings call, Mattel shared much of the same message. Both companies said the first quarter is historically a light one in terms of sales. That means any headwinds from coronavirus are less problematic now than they would be during other times of the year. Still, both toymakers said the full effect of coronavirus on business will be determined by the duration of the outbreak.

If the outbreak worsens, the damage will be significant. Though Hasbro is making an effort to reduce its reliance on China, the company said in the earnings call that two-thirds of its products are still sourced there. Mattel doesn't specify how heavily it relies on China, but its production in several countries may mitigate coronavirus risk. In its 2018 annual report, Mattel said it produces toys in many facilities in various countries -- China and five others -- in case a problem in one location disrupts production.

Hasbro and Mattel both reported fourth-quarter results that beat analysts' estimates on the bottom line. Hasbro saw strength in Star Wars and Frozen 2 toys, while Mattel saw an increase in sales of Hot Wheels, action figures, and games. In spite of those positive trends, shares of Hasbro and Mattel declined 24% and 19% in February, respectively.

On the cusp of recovery

So what can investors expect from the next batch of earnings? Weaker sales figures in the current quarter are very likely, and considering it isn't a crucial quarter for the industry, that in itself isn't a catastrophe. More worrisome, as MGA Entertainment's Larian said, is production for the holiday season. Though companies right now are saying they can play catch up, will they truly be able to do so if the outbreak lasts another month, or two, or longer? In that case, weaker sales figures might not just be a one-quarter event. Mattel offered full-year 2020 guidance, predicting gross sales to grow 1% to 2.5%, but that forecast doesn't include potential coronavirus effects.

For an industry on the cusp of recovery, the coronavirus is a factor that could throw off the entire timeline. Though long-term investors in consumer-facing stocks may use weak trading now as a buying opportunity, if the coronavirus weighs on earnings for an extended period of time, there's likely more pain ahead.