Please ensure Javascript is enabled for purposes of website accessibility
Log In Help Join The Motley Fool
Free Article Join Over 1 Million Premium Members And Get More In-Depth Stock Guidance and Research
By Billy Duberstein - Mar 2, 2020 at 9:45AM

Travel stocks are in for a rough ride. Here’s a name for bargain-hunters to put on their buy list.

The recent outbreak of coronavirus has put a big damper on stocks. Though the market is only down some 12.6% thus far from its all-time highs, the stocks of many travel and transport-related stocks are down by 20% or even 30%.

For bargain-hunters sifting through the wreckage of these industries for potential long-term buys, one stock specifically comes to mind as an attractive long-term target. The company in mind is not only likely to bounce back, but is also going through its own restructuring that should make it a stronger competitor once the travel market recovers. 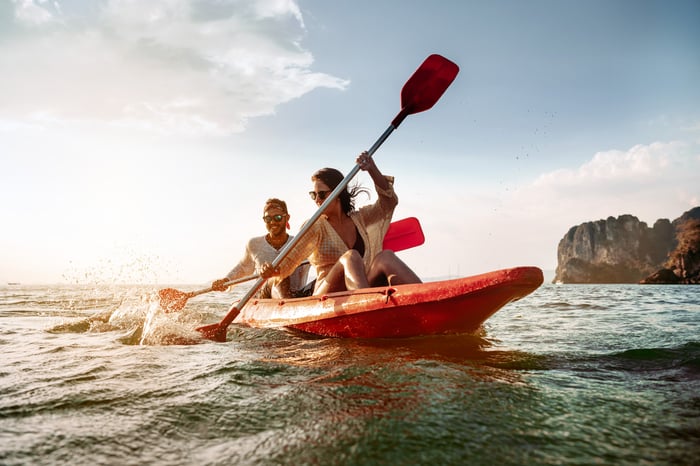 Expedia could be a bargain on a coronavirus sell-off. Image source: Getty Images.

A self-help story and bounce-back candidate

The stock of Expedia (EXPE -1.54%) has been an interesting name to watch over the past few months. Expedia is an online travel agency that operates a portfolio of brands, including brand Expedia, Orbitz, Hotels.com, Vrbo, Travelocity, and others, in addition to holding a majority stake in Trivago (TRVG -0.63%). 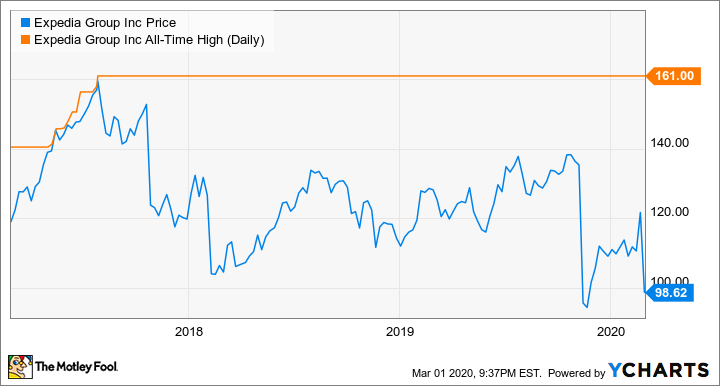 While most appreciate the near-term headwinds in the travel industry, Expedia has actually lagged over the last few years. Chalk it up to slowing growth, as search engines have recently made OTA listings less visible. In addition, management has failed to rein in costs amid the slowdown.

Expedia recently saw its revenue decelerate from 12% in 2018 to 8% in 2019. The company's adjusted EBITDA grew 8%, showing no margin expansion, while adjusted net income grew only 4% as costs increased at a faster pace. Though operating income grew 16%, that was attributable to one-time impairments taken in the prior year. The fourth quarter was even worse, with adjusted net income actually declining by 3% relative to the year-ago quarter.

A management change could signal better times ahead

Expedia Chairman Barry Diller, who also owns about 28.5% of the company's voting power through Class B shares, had had enough of Expedia's underperformance by the end of last year and on Dec. 4 ousted then-CEO Mark Okerstrom, as well as CFO Alan Pickerill, assuming the role of CEO himself.

On the recent fourth quarter conference call with analysts, Diller lamented that Expedia had become a, "consultant-led and wildly complex business," that was "sclerotic and bloated," lamenting that the company's work-life balance had become, "all life and no work." Diller promised change, getting rid of non-core activities, and looking to invest more in direct marketing to customers in order to get around the search engine problem -- a strategy that allowed rival Booking Holdings (BKNG -1.30%) to outperform Expedia in the recent past. 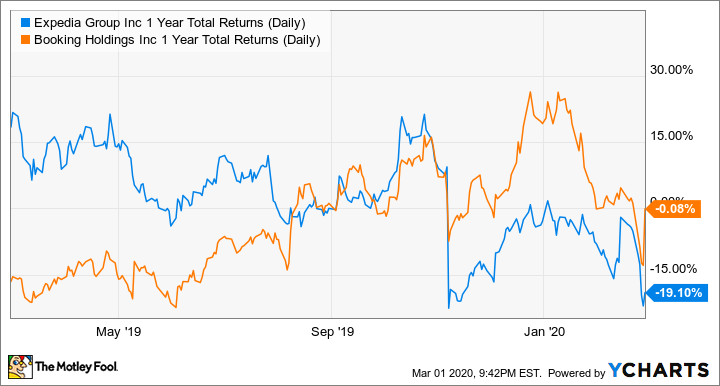 This wasn't false bluster either. Last week, Expedia announced that it would be laying off some 3,000 employees, including 500 at corporate headquarters in Seattle, or about 12% of its entire workforce.

Expedia is also lower-risk than other travel stocks

Though travel bookings may decline in the near-term, Expedia is still a relatively solid business model that should get through the crisis. At the end of 2019, the company had $4.6 billion in cash, restricted cash, and short-term investments, against only about $4.9 billion in current and long-term debt. Expedia's business model is also relatively capital-light. Despite the headwinds over the past year, free cash flow still came in at a healthy $1.6 billion, about 13.3% of revenue. Expedia also doesn't have a lot of fixed costs besides marketing, so the company will likely be able to adjust if the coronavirus slowdown gets much worse and still remain profitable.

A "double bump" ahead?

When Expedia gets through the other side of the crisis, it will be a leaner and meaner competitor in the online travel space. That likely means 2021 profits significantly higher than 2019, with 2020 being a question mark. The company trades at 26 times last year's earnings, but at just 13 times 2020 estimates, as analysts take into account the company's cost cuts. Though those 2020 earnings estimates are likely to come way down, Expedia's stock still looks like a compelling value once travelers and investors get past the coronavirus scare.