Zillow Group (NASDAQ:ZG) (NASDAQ:Z) recently reported fourth-quarter results that beat Wall Street analysts' expectations. However, its adjusted EBITDA fell from $32 million in Q4 2018 to a loss of $3 million, despite a 158% increase in revenue. How could Zillow go from profitability to losses with that sort of increase in revenue? The answer to that question is: the homebuying business, which is largely Zillow Offers.

The real estate database company has made a bet that it can disrupt the way people buy and sell homes. Its Zillow Offers business buys homes, makes necessary renovations, stages them for sale, and then sells them in the market. Zillow's bet is that at least some sellers will be willing to pay more for a fast, convenient transaction. In competitive real estate markets, what Zillow offers will often be more attractive to a seller than the standard home-selling process. 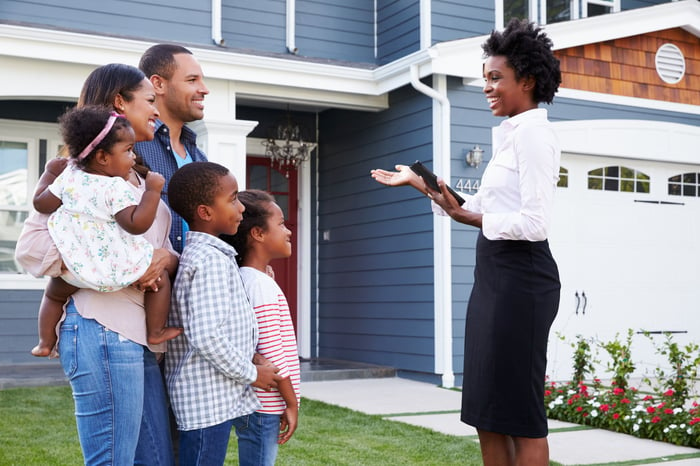 It is important to understand that Zillow isn't simply making a housing valuation call. In other words Zillow's business model isn't the same as a fix-and-flip real estate speculator's. It doesn't rely on home price appreciation to generate returns; it charges sellers a fee for the service. These fees increase the effective discount the company is paying for the property.

The program's impact can clearly be seen in the fourth-quarter report: A year ago, the internet, media, and technology segment (IMT), which has been the bread and butter of Zillow, accounted for 82% of its $365 million in revenue. In Q4 2019, the homes segment accounted for 64% of total revenue. But the segment's adjusted EBITDA loss of $82.5 million nearly wiped out the IMT segment's adjusted EBITDA of $87.7 million. When you include the interest expense of $9.3 million, the loss increases to $91.8 million. Some of the loss is timing-related, but selling and renovation costs are the big drivers.

Margins are improving, but losses are growing

In the fourth quarter, Zillow bought 1,787 homes and sold 1,902. It ended the quarter with 2,707 homes in inventory. The company brought Zillow Offers to three new markets in the quarter, mentioning Los Angeles in its press release. On March 2, Zillow announced that Offers had launched in Cincinnati, its 24th market, and has plans to launch in Jacksonville, Fla., and Oklahoma City this year. Management forecast that homes revenue in the first quarter will come in between $675 million and $700 million, and expects adjusted EBITDA to be a loss of $85 million to $95 million. Once the program scales up, though, Zillow forecasts adjusted EBITDA returns of 200 to 300 basis points per home sold. Zillow has provided no guidance as to when the business will reach break-even.

Source: Zillow Group filings. All dollar figures are in millions.

In its shareholder letter, the company broke down the economics of the homes business in the fourth quarter, which allows investors to consider which items in the expense column are likely to decline as the business expands.

Acquisition costs, renovation costs, and holding costs will by necessity rise in lockstep with volume. (Holding costs include things like HOA fees, taxes, insurance, and maintenance.) The line item with the most potential for savings is probably selling costs; those are mainly agent commissions. But aside from making lower offers on homes, there don't appear to be massive opportunities to cut the expenses involved in this business. Another way to increase the segment profitability would be to increase turn times. Zillow is targeting 90 days from purchase to sale, but perhaps there is room to decrease that. Finally, while it won't show up in the segment results, Zillow anticipates the activity will drive additional revenue in ancillary services like mortgage, title, and escrow. The big question is whether Zillow Offers will really gain popularity among home sellers. As it stands, the fees are generally higher than the traditional route. How many sellers will be willing to pay an extra 1% to 3.7% to escape the hassle of staging and selling their homes? Moreover, if Zillow finds that it has to reduce its bids to make make a profit on the service, it will be even less attractive to sellers.

Can this activity become profitable to the company? That is unclear. But in the meantime, Zillow Homes will be driving the company's earnings, so investors should look at it as more of a real estate play than a tech stock.