Please ensure Javascript is enabled for purposes of website accessibility
Log In Help Join The Motley Fool
Free Article Join Over 1 Million Premium Members And Get More In-Depth Stock Guidance and Research
By Neha Chamaria - Mar 3, 2020 at 10:30AM

These 4%-6% yield dividend stocks with potential to maintain and even grow those yields should appeal to retirees.

Dividend stocks are a top source of income for retirees, provided the stocks pay out regular and steady dividends. Even better if it's a dividend growth stock, as rising dividends not only boost income but also multiply your returns from stocks in the long term.

A good strategy for retirees is to invest in dividend stocks that yield at least 3% and increase dividends regularly. Here are three top stocks ideal for retirees thanks to their high yields that look safe.

A top utility stock to own

You cannot not own a utility stock in retirement. Because of the defensive and resilient nature of their businesses, utility stocks not only pay good dividends but also tend to outperform during a downturn -- a characteristic that can save retirees from nasty shocks during rough times. I like Dominion Energy (D 1.79%), yielding 4.6% currently. Because 95% of Dominion's operating income comes from regulated assets, it enjoys steady cash flows and can pay stable dividends -- it has increased dividends for 17 consecutive years. 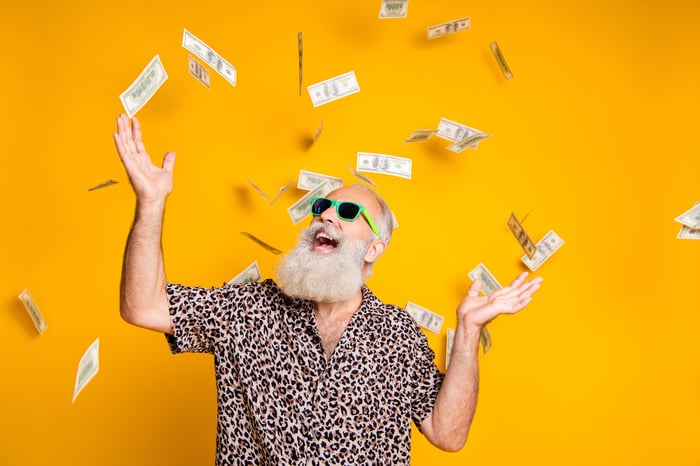 Dividend rose a tiny 2.5% last December, but that's only because of some recent changes at Dominion -- such as the $14.6 billion acquisition of SCANA -- that encouraged management to slow down dividend growth and instead use cash to pare debt and improve financial strength. It's a smart move for the long term, and it's expected that Dominion should be willing and able to offer bigger dividend increases as before -- it increased dividends by 10% each in 2017 and 2018 -- once its debt and dividend payout ratio reaches comfortable levels.

With SCANA, Dominion's customer base has swelled to more than 7 million in 18 states. Between 2019 and 2023, Dominion plans to invest $26 billion in growth projects. Beyond that, its proposed largest offshore wind farm in the country is a key project to look out for. These investments should help the utility win regular base rate increase approvals from the regulatory authorities -- Dominion foresees 7% compound annual growth rate (CAGR) in base rate between 2018 and 2023. Retirees can bank on Dominion Energy for regular dividend income and a high yield.

5.9% yield and a compelling macro-trend

The appeal of an aging population has seen a frenzy of construction activity in SHOP in recent quarters, hurting rentals, occupancy, and profits for most companies operating in the space. Ventas' mixed portfolio, however, mitigates risks to some extent. A triple-net lease, for example, includes annual base rent escalators, which brings in steady cash flows and also passes on the buck of key expenses including property taxes, insurance, and maintenance to the tenant.

Ventas made some credible investments last year, such as $0.9 billion in five research and innovation development projects under partnerships with leading institutions including the University of Pittsburgh and Drexel University. A bigger deal was its $1.8 billion acquisition of 31 senior-housing facilities in the attractive Quebec market from Le Group Maurice (LGM). Meanwhile, Ventas plans to dispose non-core senior housing assets worth $0.6 billion in 2020 to strengthen its portfolio.

As a REIT, Ventas has to pay 90% or more of its taxable income as dividends to shareholders. Barring last year, Ventas increased its dividend annually for nine consecutive years. Even if Ventas doesn't raise its dividend this year, a cut is unlikely as the company's lower end of guided normalized funds from operation (FFO) of $3.56-$3.69 per share still means an FFO payout of around 89% at current dividend rate. For the long haul, this 5.9%-yielding stock looks like a good fit for retirees.

A money-making machine for retirees

A master limited partnership doesn't suit retirement portfolios, but Brookfield Infrastructure Partners (BIP 1.86%) is a great exception, as it can be owned in retirement accounts like an IRA and 401(k) and offers excellent growth as well as dividend potential.

Brookfield Infrastructure buys high-quality infrastructure assets, overhauls and makes money, and sells them when mature to reinvest the proceeds opportunistically. The key to its success lies largely on management's ability to find good assets selling at low prices from companies putting up assets for sale for whatever reasons -- say, an industry downturn or a dire need to raise funds to run operations or deleverage. Brookfield buys assets in telecommunications, energy, utilities, and transportation sectors. 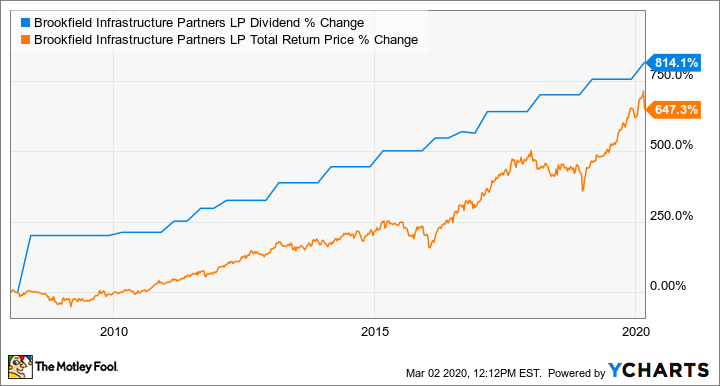 To give you an idea of its portfolio size, Brookfield owns 6.6 million electricity and gas connections, 9,100 telecom towers, and roughly 20,000 miles of rail operations, 2,500 miles of toll roads, and 10,000 miles of energy transmission pipelines, among other things. Brookfield's operations are spread across North and South America, Europe, and the Asia-Pacific region.

2019 was a fantastic year for Brookfield, as it grew FFO per share by 11%, invested $2.6 billion in 10 new assets including North America rail and telecom towers in the UK and India, and raised $1.5 billion through the sale of mature assets. With a solid portfolio generating steady cash flows, Brookfield has grown its dividends at a CAGR of 11% since 2009, becoming a multibagger stock in the bargain. This 4.2%-yield stock is one of the best picks for retirement.