Pot stocks are in a precarious place at the moment. Despite nearly nine straight months of staggering losses in 2019, the space has continued to break down at a worrying pace in 2020. Every single major Canadian marijuana company, in fact, has lost at least 10% of its value this year, with several companies posting losses of greater than 30% only two months into the new year. While some of this industrywide weakness can be attributed to the marketwide coronavirus sell-off, the vast majority of it is due to the confluence of anemic sales, deteriorating balance sheets, poor internal controls, a thriving black market, and regulatory bottlenecks.

With the legal marijuana space in full-scale retreat, bargain hunters might be tempted to nibble at some of these beaten-down equities right now. Before doing so, though, it might be a smart idea to simply watch a few of the industry's bellwether names during this turbulent period. Which marijuana stocks could be key indicators of where the industry is headed as a whole for the remainder of 2020 and beyond? Aurora Cannabis (NYSE:ACB), Cronos Group (NASDAQ:CRON), and Tilray (NASDAQ:TLRY) are three of the most important marijuana stocks to keep tabs on this month. Here's why. 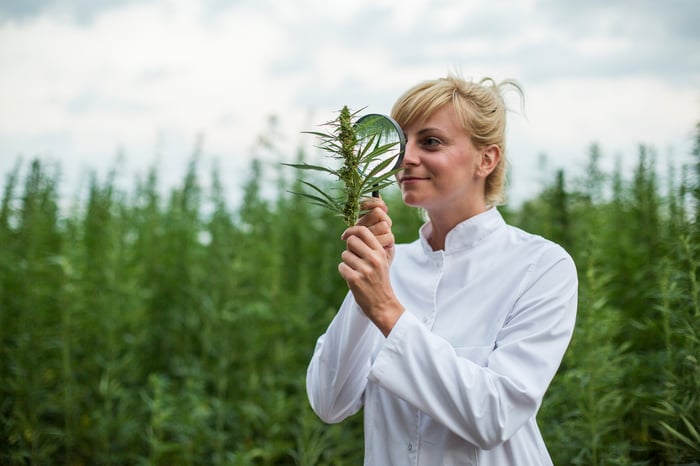 Aurora Cannabis: An ominous milestone is close at hand

Not long ago, Aurora appeared to have the inside track toward becoming one of the few giants of the nascent legal marijuana industry. Then everything fell apart. The company's overly aggressive acquisition strategy -- designed to give it a competitive advantage over the broader field -- has stressed its balance sheet to the max. And even though the company has been slashing costs and changing up its leadership team of late, the fact of the matter is that Aurora may soon face a serious liquidity crisis. What's more, Aurora won't be able to simply tap the public markets to get out of this financial jam.

That brings us to the main reason to watch this struggling pot company this month. With a share price of $1.36 at current levels, Aurora is now painfully close to the minimum bid requirement for the New York Stock Exchange ($1 per share). So, in light of the company's clear need to raise cash and seemingly limited options to do so, a reverse split appears almost inevitable at this point. In fact, a reverse split, followed by a hefty capital raise, is probably the smart move from a longevity standpoint. Aurora has the pieces to become a cannabis titan, but first, it needs to survive this rather brutal period.

Cronos Group: A crisis in confidence

Cronos Group is drawing the ire of shareholders right now over its inability to file the required financial statements for fiscal 2019 on time. Yesterday, the company announced that an ongoing review revealed some issues regarding accounting practices and revenue recognition related to the bulk purchases of resin and sales of products through the "wholesale channel." Cronos said that it plans to complete the 10-K filing within the 15-day extension period under Rule 12b-25.

Postponing the release of a regulatory filing isn't the end of the world, but this latest accounting snafu couldn't have come at a worse time for Cronos. The crux of the situation is that numerous pot companies have had a litany of problems with basic record-keeping. If the industry wants to be taken seriously by investors, it needs to become markedly more professional on the accounting front. Filing financial statements on time, without major errors, is a basic requirement for companies listed on major U.S. stock exchanges. So Cronos needs to get this right and do so in a hurry; otherwise investors may lose confidence in management.

Tilray: Where are the profits?

Tilray released its fourth-quarter and 2019 full-year results after the closing bell Monday. Unfortunately, there weren't a whole lot of positives in this latest financial report. While Tilray was quick to point out that annual revenue rose by a stately 287% to $167.0 million for the full year, the company still lost a staggering $321.2 million in fiscal year 2019.

That kind of cash burn rate is simply unsustainable. So to address this touchstone issue, Tilray recently reduced its workforce by 10% and initiated a cost-saving restructuring process. Even so, Tilray may nevertheless face a cash crunch of its own within the next 12 to 24 months.

All told, Tilray clearly needs to boost sales in a big way and drastically reduce costs over the course of 2020. If the company can't fix these fundamental problems, it may soon be relegated to second-class status within the emerging legal marijuana industry.