The company is moving ahead with a crucial phase 2 trial to treat cytomegalovirus.

Moderna (MRNA 0.22%) announced after the closing bell on Tuesday that it had finished enrollment for a mid-stage clinical study concerning one of its mRNA-based vaccines. The treatment in question, mRNA-1647, seeks to treat cytomegalovirus (CMV), a major cause of birth defects in newborn babies when transmitted via a pregnant mother.

The phase 2 trial for mRNA-1647 will test 252 healthy adults affected with CMV. While the symptoms of the virus are relatively mild (fever, sore throat, and weight loss, although in many cases there are no noticeable symptoms), pregnant women with CMV are at risk of spreading the infection on to their babies. There's a significant risk that newborns infected with CMV in this way will be born with a disability. 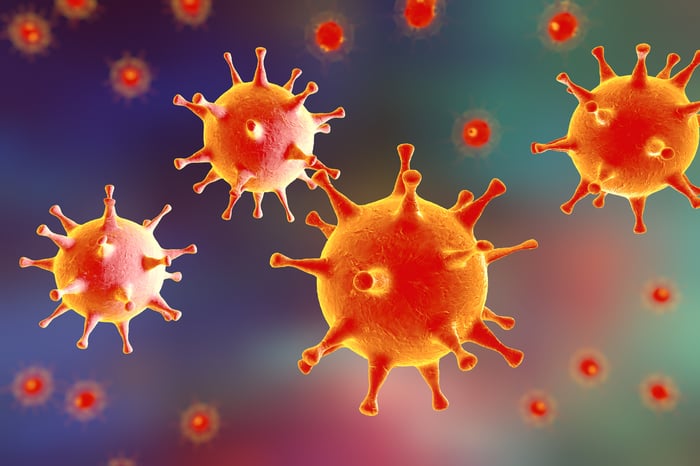 The full results of this new phase 2 trial are expected sometime in Q3 2020. Should the data prove to be positive, the biotech company expects it could enter a phase 3 trial for the vaccine in early 2021.

mRNA-based vaccines are still experimental at this stage, with Moderna's treatments being the first mRNA treatments to move to clinical testing with humans. In theory, mRNA-based treatments can be more effective than their DNA-based counterparts, given that mRNA is found throughout the cell while DNA is stored only in the nucleus, which is harder to access.

Moderna is also developing an mRNA-based COVID-19 vaccine in partnership with the U.S. National Institutes of Health (NIH) and the National Institute of Allergy and Infectious Diseases (NIAID). Results from early stage clinical trials are expected to be available sometime this summer.