Moving from a quarterly profit to a loss disappointed investors.

Shares of Beyond Meat (BYND -0.94%) fell 18.8% in February, according to data provided by S&P Global Market Intelligence, after the maker of plant-based meat alternatives reported a loss for the fourth quarter and announced a full-year 2020 adjusted EBITDA forecast that is in line with last year's level.

Though the company said revenue tripled year over year, it reported a loss of $0.01 a share. Beyond Meat said it plans to spend more on marketing, research and development, and international expansion -- and that's why full-year adjusted EBITDA as a percentage of net revenue isn't expected to move much higher. 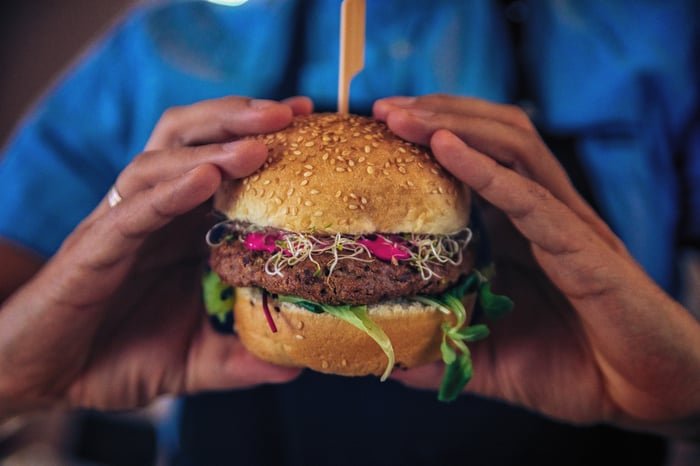 Beyond Meat had plenty of good news to report. For example, gross profit rose to $33.5 million in the fourth quarter from $7.9 million in the year-earlier period. The company also made gains in fresh products, such as the Beyond Burger. This is significant, because its fresh products are priced higher per pound than its frozen products. In spite of these positives, investors were disappointed in the path earnings are taking. Beyond Meat's quarterly loss came after it reported its first profit in the third quarter. And the 2020 EBITDA forecast showed the company's priority now is investing in growth. That isn't negative, but the increased spending means earnings may not climb in leaps and bounds.

As rivals including former Beyond Meat investor Tyson Foods (TSN 0.01%) and food industry heavyweights Perdue Foods, Nestle (NSRGY 0.56%), and Kellogg (K 0.34%) enter the market, a concern is whether Beyond Meat will be able to stay ahead of the crowd and maintain its prices. Another rival, Impossible Foods, said on March 3 it was cutting prices to distributors by 15%.

Beyond Meat's research and development costs jumped 80% in the quarter compared with the year-earlier period, so the company clearly is making an effort to innovate. Now the question is: Will those investments pay off for the company and investors? That only will be clear in earnings reports once Beyond Meat has faced the newer-to-the-market rivals for a few quarters.

In spite of February's loss, Beyond Meat shares still are up 27% so far this year, and Wall Street expects 7.7% upside from this point. News on partnerships or international growth may give shares of this food stock a short-term lift, but considering possible pressure on prices, it's unclear what may steadily push the shares higher in the longer term.