Please ensure Javascript is enabled for purposes of website accessibility
Log In Help Join The Motley Fool
Free Article Join Over 1 Million Premium Members And Get More In-Depth Stock Guidance and Research
By Rich Smith - Mar 3, 2020 at 10:45AM

It's a reverse merger!

You probably haven't ever heard of VectoIQ Acquisition Corp. (VTIQ) before -- and that's OK.

Today, VectoIQ will finally fulfill its purpose, as it announces the acquisition of privately held, Utah-based Nikola Corporation -- and sees its stock rise 12.4% (through 9:50 a.m. EST) in response. 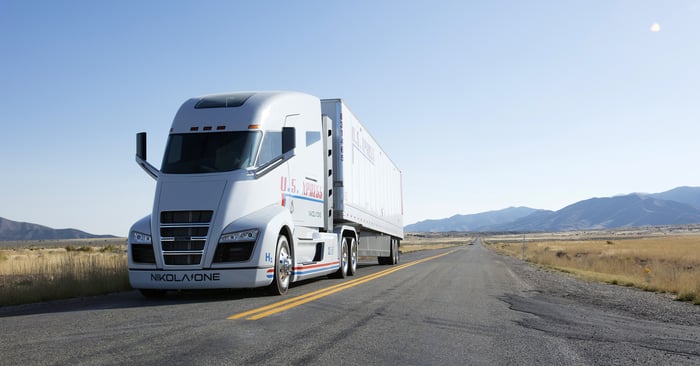 Of course, you probably haven't ever heard of Nikola Corporation either -- and that, too, is OK. It's privately held, after all, and not yet well known. But we should still try to fix that.

As the companies explain, Nikola was formed to develop a family of battery-electric vehicles (BEV) and hydrogen fuel-cell electric vehicles (FCEV) for sale to green-focused transportation companies, and to develop "a hydrogen station infrastructure to support its FCEV vehicles." In particular, Nikola wants to make electric "class 8 semi-trucks" that might compete with the electric semi truck that Tesla (TSLA 2.55%) announced in 2017 (but still hasn't begun selling).

VectoIQ and Nikola say their merger will be effected in Q2 2020 at a "pro forma enterprise value" of about $3.3 billion. It's unknown how many shares that value will be divided up among, but when the company first begins trading on the Nasdaq under ticker symbol "NKLA," its share price should be around $10, the price at which Nikola plans to run a "$525 million private placement of common stock."

Nikola isn't making much money right now, and VectoIQ isn't making any either, but together, they say they have "more than 14,000 pre-orders" on the books already, "representing more than $10 billion in potential revenue and two-and-a-half years of production" work.

Revenues will begin rolling in 2021 with the introduction of the company's "BEV truck," followed by sales of the "FCEV truck" in 2023.