Please ensure Javascript is enabled for purposes of website accessibility
Log In Help Join The Motley Fool
Free Article Join Over 1 Million Premium Members And Get More In-Depth Stock Guidance and Research
By Lee Samaha - Mar 4, 2020 at 10:33AM

UPS and Axalta are starting to look attractive after recent market falls.

So you want to take advantage of the recent market falls in order to pick up some stock a bit cheaper? Moreover, you want to follow Warren Buffett into some positions? Look no further, as here are two stocks held by Warren Buffett's Berkshire Hathaway (BRK.A 1.69%) (BRK.B 1.64%). UPS (UPS 1.34%) and paintings and coatings company Axalta Coating Systems (AXTA 1.36%) have both been beaten up in the recent sell-off and are worth taking a look at.

The company probably deserves an award for being the most frustrating stock in the industrial sector. For at least the past five years, the big question mark around UPS, and FedEx (FDX -1.37%) for that matter, has been whether burgeoning e-commerce growth would create a long-term earnings growth opportunity or a never-ending need for investment in delivery networks. The latter is problematic because it implies lower margins and less free cash flow (FCF) generation due to heightened capital expenditures. 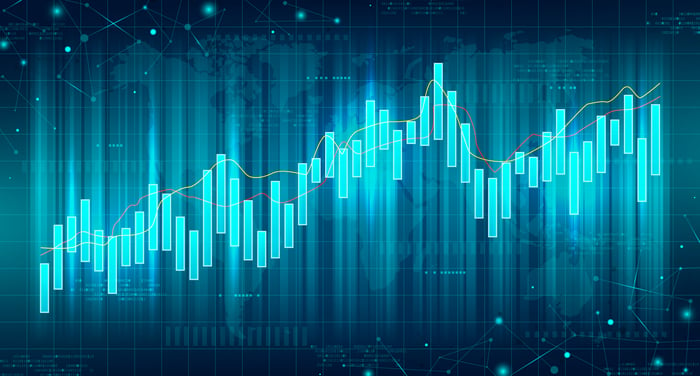 The charts below show how capex as a share of revenue has increased and operating margin has gone nowhere for UPS and FedEx in the past few years. 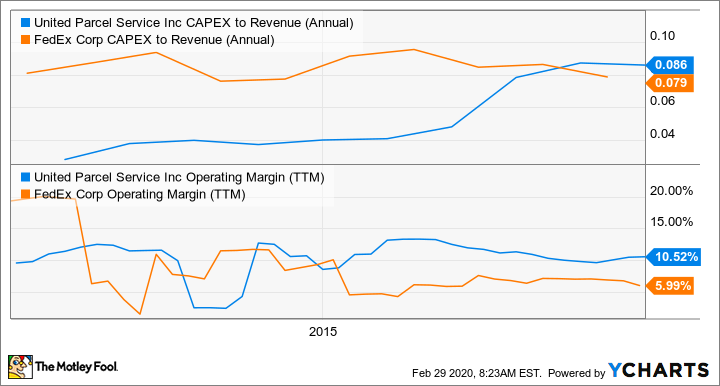 Cautious investors probably adopted a "wait and see" to affairs, patiently waiting until UPS started dialing back capex spending and demonstrated it could reduce costs and expand margin accordingly. As such, they would have welcomed developments in third-quarter earnings in October, when UPS demonstrated margin expansion in all three segments, a trend of reducing its cost per piece, and an increase in full-year 2019 FCF guidance on the back of reduced capex requirements.

Fast-forward to the fourth-quarter earnings report in January and investors were left feeling disappointed when UPS announced yet more spending measures -- which are set to reduce full-year earnings per share by $0.33, with guidance at $7.76 to $8.06. Meanwhile, capex is to be ramped up to $6.7 billion from $6.5 billion in 2019. It's no surprise that investors were disappointed.

But here's the thing. The spending is largely intended to improve UPS's service to the small and medium-size business market and support future growth. In addition, adjusted operating margin expanded across all three segments for the quarter and the full year. Finally, UPS FCF guidance of $4.3 billion to $4.7 billion puts the stock on a forward-price-to-FCF multiple of 17.3 times and a dividend yield of 4.5%. If you don't believe that the coronavirus will significantly impact growth in 2020, then UPS is looking like a very good value.

Trading on a forward P/E ratio of around 12 times earnings and a current-price-to-FCF multiple only a little above that, paintings and coatings company Axalta is a cheap stock on a superficial basis. However, stocks are often cheap for a reason, and in this case investors are holding off buying Axalta because of its exposure to automotive and trucking original equipment manufacturing in its transportation coatings segment and its general industrial exposure in its performance coatings segment.

The table below shows how deteriorating trends in the fourth quarter led to a decline in adjusted earnings before interest and taxation, or EBIT, in transportation coatings. Throw in a bleak outlook for light vehicle and truck production in 2020 and it doesn't look good for the transportation coatings segment.

Indeed, transportation coatings sales were down 7.7% in the fourth quarter on a constant currency basis, and a 12.2% decline in industrial sales also dragged the performance coatings segment into a 2.8% sales decline as well.

Data source: Axalta presentations. Total figures don't tally with segment due to depreciation and amortization expenses associated with an acquisition.

Three reasons why Axalta is interesting

The bad news out of the way, it's a good idea to put some context around Axalta's prospects. I have three points that should make investors feel more bullish.

First, the results weren't that bad. In fact, fourth-quarter and full-year profit both rose because of margin improvements driven by lower fixed costs, lower raw material costs, and a shift in sales to higher-margin coatings sales.

Second, the largest part of the company's sales comes from the refinish market, which holds up well in a downturn. Moreover, the performance segment (refinish and industrial) EBIT margin is in the mid-teens compared to mid-single digits for the transportation segment. 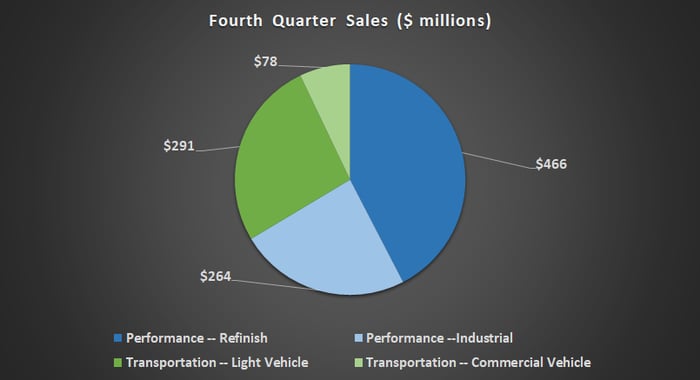 Provided you aren't worried about a lasting impact from the coronavirus, and can stomach some market volatility, then the recent price falls provide a useful entry point into both of these stocks, and it doesn't hurt that Warren Buffett has invested in these stocks too.