One of the plane's most important customers is scaling back expansion as demand falters.

Airbus (EADSY 1.08%) is reportedly considering cutting production of its A330neo commercial aircraft as the COVID-19 coronavirus outbreak cuts into travel demand, causing large airlines to rethink their expansion plans for the year.

The European plane manufacturer is reviewing production plans and could make a decision on the A330's future as soon as this month according to a Bloomberg report Wednesday. The decision is likely to be driven by a decision last month by Air Asia Group to postpone deliveries of new A330neos. Air Asia is responsible for about 25% of outstanding orders for the plane, according to the report. 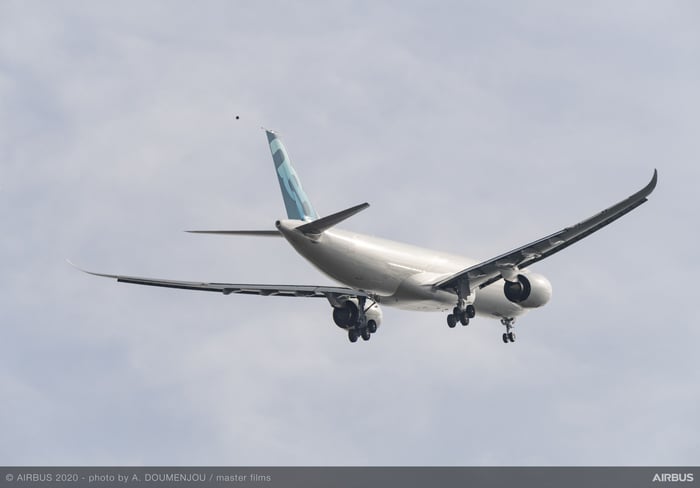 Air Asia has a lot of its capacity tied to China and likely felt the pinch from coronavirus sooner than most western airlines. But the impact is spreading along with the virus. United Airlines on Wednesday said it intends to cut international capacity by 20% and domestic flying by 10% in April, parking some of its larger, less fuel efficient widebody planes in the process.

Although Airbus and archrival Boeing (BA -1.25%) still enjoy substantial order backlogs for their narrowbody A320 and 737 models, the market for widebody planes like the A330 was expected to soften even before coronavirus concerns hit. Airbus in February said it would produce 40 A330s in 2020, down from 53 in 2019, and Boeing has announced plans to reduce production of its 787 Dreamliner to 10 per month in 2021, from 12 per month this year.

The struggle by airplane manufacturer to sell widebodies is in part a product of their engineering successes elsewhere. Historically larger widebody planes were more efficient to operate because they can carry more passengers over farther distances. But the new generation of narrowbodies are more fuel efficient than past versions and can economically fly further distances.

Boeing shares have been under pressure of late due to concerns a travel slowdown will eat into new plane demands. The company has leaned on 787 revenue over the past year as its 737 MAX remains grounded and can ill-afford to production cutback at this time.