The packaged food company's debt reduction work is starting to pay off.

Campbell Soup Company (CPB 1.06%) shares surged 7% on Wednesday following the release of its fiscal second-quarter numbers, reaching new 52-week highs as a result. The food giant topped revenue and earnings estimates for the three month stretch ending in late January, and underscored those results with improved guidance for the remainder of the year. 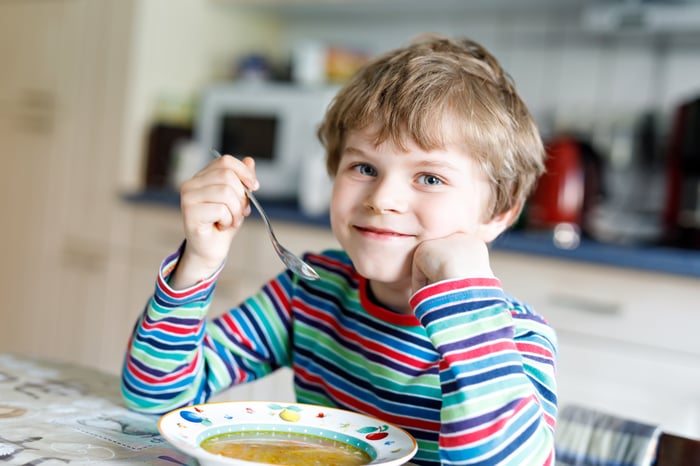 The report was good news for shareholders who saw Campbell Soup -- along with other packaged food names -- run into a headwind beginning in 2016. Most, including Campbell's, have been reshaping their operations to achieve better efficiency and lower costs, but Campbell's may be doing so more effectively than others. The stock had already gained more than 50% between its early January 2019 lows and this January's highs. Shares were also somewhat shielded from the brunt of last week's coronavirus-driven sell-off, and they rebounded better than most on Monday of this week. The solid second-quarter report left the stock within easy reach of prices not seen since mid-2017.

For the three months ended January 2020, Campbell Soup Company reported income of $0.72 per share, up from $0.65 earned in the comparable quarter a year earlier, and topping analyst estimates of $0.66. Those same analysts were modeling sales of $2.15 billion, according to FactSet, versus the company's actual second quarter top line of $2.16 billion. Sales under generally accepted accounting principles (GAAP) were essentially flat year over year, though organic sales were up 1%.

A successful debt reduction effort also prompted the company to raise its 2020 adjusted EPS outlook to a range of $2.55 to $2.60. Both figures are a nickel higher than Campbell's most recent prior guidance.