Campbell Soup topped second-quarter estimates, but there are additional positive takeaways for investors.

Shares of Campbell Soup (CPB -0.49%), a producer of snacks, soups, simple meals, and beverages, are up over 8% Wednesday morning after the company topped earnings estimates during the second quarter.

Campbell Soup's second-quarter net sales checked in at $2.16 billion, roughly flat compared to the prior year but better than analysts' estimates calling for $2.15 billion. Organic net sales managed a 1% gain. Adjusted earnings per share increased 11% to $0.72, compared to the prior year, topping analysts' estimates calling for $0.66 per share. "Given the momentum of the business and lower adjusted interest expense from our debt reduction, we are able to make important incremental investments in the business in the second half while increasing adjusted EPS guidance for the year," said Campbell's President and CEO Mark Clouse in a press release. 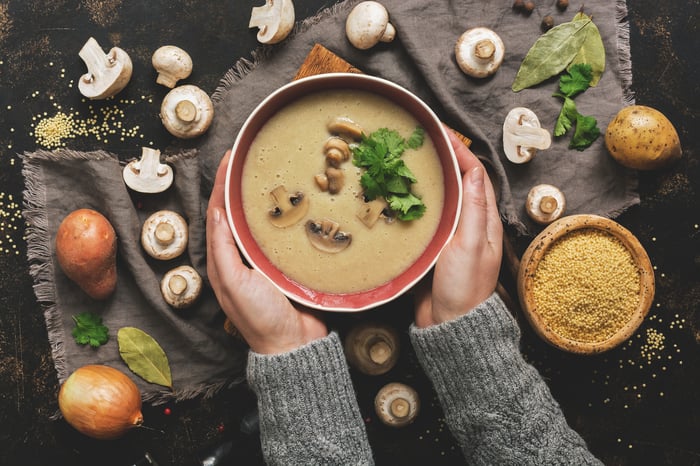 Campbell's investors have a number of positive takeaways. Gross margin, which began declining in late 2017 due to a lack of pricing power, increased from 32.5% to 34.3%, continuing a recent trend you can see in the graph below. 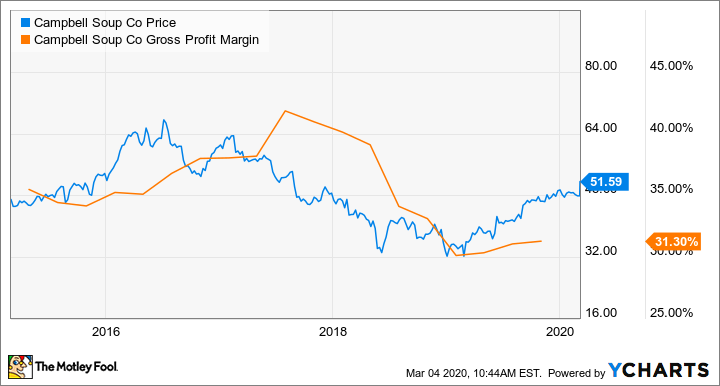 Management also reduced its pile of debt, which was a large concern for many investors, and that was reflected in a 22% decrease in its adjusted net interest expense during the second quarter, compared to the prior year. The icing on the cake for investors was management's raised guidance: Fiscal 2020 adjusted earnings per share is now expected in the range of $2.55 to $2.60 per share, up $0.05 on both ends of the range. It's a competitive industry, but management has made a number of divestitures to focus on driving profitable growth across its core categories -- simple meals, beverages, and snacks -- and the turnaround seems to be gaining traction, as evidenced by Campbell's 42% share price gain over the past year.