The implications of the decision are apparent in its latest earnings results.

On the face of things, Campbell Soup Company's (CPB -0.37%) fiscal second-quarter 2020 results were decent, if not earth-shattering. Adjusted earnings per share increased by double-digits, while net sales of U.S. soup rose by 1%, signaling a continued stabilization in the company's meals and beverages segment.

Yet these positive signs, coupled with a slightly improved fiscal 2020 outlook, were enough to propel shares forward by nearly 9% in afternoon trade on Wednesday. Shareholders are undoubtedly exhibiting increased confidence in Campbell's ability to grow earnings over the next several quarters. Below, let's briefly review the last three months, and discuss why a crucial decision regarding share repurchases has underpinned the company's potential for success.

Note that all following comparative numbers are presented against the prior-year quarter.

Data source: Campbell Soup Company. N/A= not applicable; data not comparable due to a large one-time gain in Q2 2020 (discussed below). 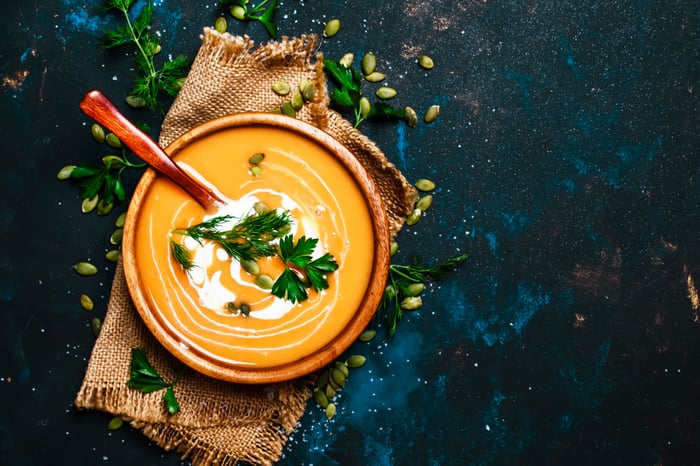 Why Campbell is benefiting from a tough decision

In August 2018, Campbell announced that it would sell off its underperforming Campbell Fresh and international businesses to jump-start the organization's fortunes. Since the beginning of the divestment process, net proceeds from these sales have totaled roughly $3 billion.

It's not unusual, and often tempting, for management teams of consumer staples multinationals to use funds from the sales of business divisions to repurchase shares to boost stock price. Temptation must have run especially high for Campbell's executive team, as the drag from the businesses being sold had resulted in a cumulative share price loss of 13% in the trailing five-year period preceding August 2018.

Yet Campbell has used its divestments to pay down debt, which ballooned by $6.2 billion to $9.6 billion when the company acquired snacking giant Snyder's-Lance in March 2018. Of course, management did indicate at the time that it would begin divesting with the express purpose of reducing the borrowings associated with the Snyder's-Lance transaction. But the organization has been particularly disciplined in avoiding the use of even a portion of the funds for shareholder-friendly buybacks.

As a result, Campbell's long-term debt has declined to $4.9 billion at the end of fiscal Q2 2020, with some assistance along the way from internally generated cash. Not only has this given the company much more financial flexibility, but it's also reduced an onerous interest expense burden. In fact, lower interest expense for the remainder of 2020 is a primary factor behind the company's positive earnings outlook tweak this quarter.

Given this illustration of fiscal discipline, and the greater chances for growth following the sale of its weak divisions, it's not surprising that shareholders have reacted so positively to Campbell's second-quarter report. In fact, they've been endorsing the company's brighter prospects for several quarters running: Over the last trailing 12 months, Campbell shares have appreciated by 42%.