With Amazon's new cashierless grocery store in operation, do Walmart and other grocery competitors need to ramp up their tech?

Amazon (AMZN 3.15%) wants to be your friend. And Walmart's, and Kroger's, and Target's, too. Despite disrupting retail and capturing the No. 1 spot in the industry, the tech giant wants to help rivals up their game -- for a licensing fee, of course.

Is this the future of grocery shopping? And do any supermarkets that want to stay relevant need to bow to Amazon?

What Amazon stands to gain

Convenience is one of the top factors for customers choosing a shopping destination. Standing in line is one of the most inconvenient parts of shopping, which is one reason many have turned to shopping online. But that doesn't work when you need to get things right now, and it also hasn't helped Amazon take over grocery. The best way to combine immediate fulfillment with convenience -- and for Amazon to gain a new edge in the market -- is cashierless checkout.

Amazon has already opened up roughly two dozen cashierless Go stores, but last week it unrolled its most ambitious Go concept yet, a 10,400-square-foot grocery store in Seattle. After tweaking the platform since its inception three years ago, it can now manage a much larger space and many more products. The technology combines customers registering and entering with an app, and then lots of cameras and sensors throughout the store that monitor what the customer purchases.

The second part of the initiative is licensing the platform to other companies, whether those are competitors in groceries or other venues such as sports arenas or other types of retailers. Amazon has seen success with licensing other tech innovations, such as voice-enabling to car manufacturers. Making money off its own grocery stores is less of a sure thing than profiting from licensing the cashierless system, which makes licensing very attractive. 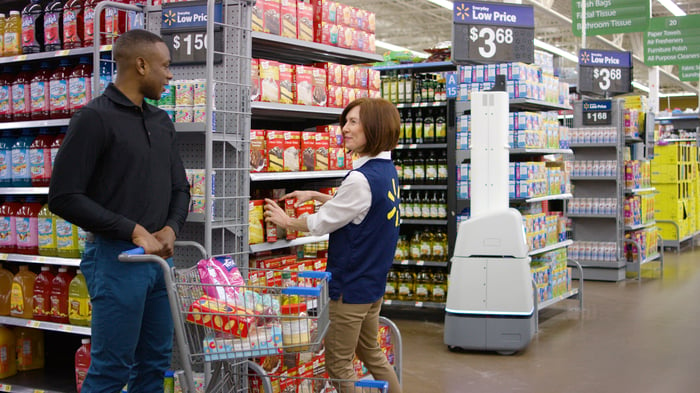 Why Walmart can bow out, for now

Walmart is coming off a solid year with some minor mishaps, managing to stay in touch with customer needs and retail trends. In fiscal 2020, which ended Jan. 31, it had a 1.9% increase in sales, a 2.8% increase in comparable-store sales, and a 37% increase in e-commerce sales.

Amazon Go won't be putting Walmart out of business anytime soon. The Amazon Go platform is a small step for the tech giant, but it's expensive to scale, so it's unlikely that the system can be implemented broadly in the near future. It has some drawbacks, such as charging per item because weighing is a challenge. And the king of disruptors certainly knows there are also competitors developing similar platforms, such as Grabango.

Walmart has tried its own version of cashierless buying with customers scanning barcodes, but that system took the time waiting in line and added it instead to the weighing and scanning. It recently introduced Check Out With Me in some areas, where an associate can ring up products while the customer shops.

In the meantime, there are other elements of tech innovation that are important to a company like Walmart. Robotics have become increasingly relevant, as they can scan aisles and easily discover products that are out of stock, and data analytics are helping supermarkets make more competitive pricing choices.

And if and when shopping without cashiers becomes the norm, Walmart can always buy the next small company that's developing the technology it needs.

One thing to keep in mind, though, is that Walmart was slow to jump on the e-commerce bandwagon, and it paid the price in losses to Amazon. While it has bounced back and has developed a strong online platform, it shouldn't make the same mistake twice.

The likelihood is that with all of the research and new developments in technology, the day will come when people will remember cashiers like walking 10 miles in the snow to get to school. Robots and digitally powered technology are pushing standards to a new direction, and the Internet of Things is changing the way we drive, shop, work, and play. For any retailer not to take the threat seriously is a mistake. Target CEO Brian Cornell said: "You won't see robots in Target anytime soon. The human touch still really matters." Well, he might want to rephrase that statement if he wants to stay competitive. The human touch should be felt where it needs to be, but robotics will be taking over other areas.

While all of these companies are utilizing these tactics to grow their own top and bottom lines, with prices being pushed down and companies risking profits to make the everyday shopping experience easier, there's at least one clear winner -- the customer.