Please ensure Javascript is enabled for purposes of website accessibility
Log In Help Join The Motley Fool
Free Article Join Over 1 Million Premium Members And Get More In-Depth Stock Guidance and Research
By Jeremy Bowman - Updated Mar 4, 2020 at 10:30AM

The company is taking its Amazon Go technology to the next level.

Amazon (AMZN 0.25%) is assaulting the grocery industry from nearly every angle.

The company launched its AmazonFresh grocery delivery service in 2007. Since then, it's acquired Whole Foods and made free delivery available through Amazon Prime. It's also opened two grocery pickup locations in Seattle, and is reportedly launching its own homegrown supermarket chain in Los Angeles later this year, where it will sell the name-brand and lower-priced goods that aren't available at Whole Foods.

This week, the tech giant is opening a new kind of store that showcases perhaps its best effort yet to disrupt the grocery industry. The company is taking its cashier-less, "Just Walk Out" technology in its Amazon Go stores to the next level, opening an Amazon Go Grocery store in Seattle. 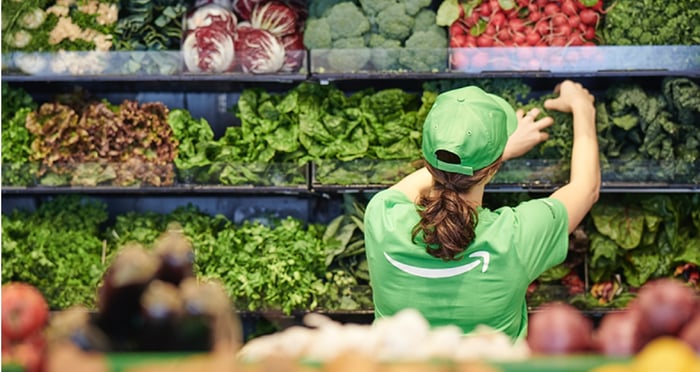 What is Amazon Go Grocery?

Unlike the 25 Amazon Go convenience stores that operate in Seattle, San Francisco, Chicago, and New York, which take up anywhere from 450 to 2,700 square feet and specialize in prepared meals, the new Go Grocery store will be much more like a typical urban supermarket.

At 10,000 square feet, the store will carry items like produce, meat, seafood, fresh bread and baked goods, and cheese. The store will also sell beer, wine, and spirits, and offer ready-to-cook and ready-to-heat meals.

The opening represents an achievement for Amazon not just in its grocery ambitions but from a technological perspective as well. When it began testing its first Go store in December 2016, making it available to only Amazon employees, the company expected to open it to the general public within three months, but instead it took over a year as it had to work out kinks around having more than 20 people in the store and when customers replaced an item they had taken off the shelves.

For the company to go from those challenges to opening a full grocery store in a little more than two years is a testament to its technological prowess and shows how fast the company is learning how to improve and expand the new technology. Dilip Kumar, Amazon Go's vice president, told The Wall Street Journal, "We've learned a lot. There's no real upper bound. It could be five times as big. It could be 10 times as big." In other words, deploying the technology to a much larger supermarket is no longer an obstacle the way it once was. That sets up opportunities for the system beyond Amazon's own stores.

Even with its ownership of Whole Foods, Amazon is still a small player in groceries, well behind competitors like Walmart and Kroger in market share. To gain a substantial share of the market would require opening hundreds of new stores, a difficult and lengthy process, especially for a company better-versed in technology than brick-and-mortar retail.

The technology behind Amazon Go, on the other hand, looks like a clear competitive advantage over traditional grocers and convenience stores. By eliminating the checkout counter, the network of cameras and sensors that make Go work saves customers valuable time and can help retailers save on labor costs that can be better spent elsewhere in the store.

Licensing the technology, therefore, may be Amazon's best option here, and it seems to be at least one of the company's goals, as it's hoping the new Go Grocery store will demonstrate its power to any interested parties. Licensing would generate much higher profit margins than running stores and would cater to Amazon's strengths as a tech company. According to the Journal, Amazon has held talks with a wide range of potential partners, including airports, sports arenas, and convenience stores. It's unclear how such a partnership would work, but it could also give Amazon valuable data about customer purchases and shopping habits that could inform future initatives.

Like it's done in areas such as cloud computing and voice-activated technology, Amazon has committed to pioneering a new technology and working to improve it over time, which seems set to pay off again. What separates Amazon from its rivals is its willingness to invest for the long term, accept the risk of failure, and invent on behalf of the customer. The Amazon Go technology seems like a perfect example of this. It eliminates a hassle for customers and saves them time, adding value, and as the technology gets better it only becomes more valuable for both Amazon and the customer.

Amazon isn't alone in this space. It faces competition from start-ups like Trigo and Grabango, but with its size, customer reputation, and its ownership of its own supermarket chain, Amazon brings unique the strengths to the table here. It's unclear what the ultimate payoff for the "Just Walk Out" technology will be, but Amazon has learned time and again that saving customers time pays off in the long run. Based on that formula, the Go Grocery looks like another win for the tech titan.