The stock market had another huge move, this time upward.

The stock market continued its run of recent volatility on Wednesday, with bullish investors winning out in today's session. Upbeat views about the primary results from Super Tuesday's contests drove markets higher, even as concerns about the COVID-19 outbreak continued. The Dow Jones Industrial Average, S&P 500, and Nasdaq Composite were generally higher by 3% to 4% on the day.

Making news today was General Motors Company (GM 3.07%), which came out with battery technology that it hopes will put it in the same league as electric vehicle pioneer Tesla (TSLA 7.33%). Elsewhere, marijuana stock Cronos Group (CRON -1.61%) posted substantial gains on a favorable view from a Wall Street analyst.

Shares of General Motors were up 3% as the automaker gave a key presentation to investors concerning its electric vehicle technology. Given the amount of attention Tesla has gotten in pioneering battery technology on the road, GM had a lot at stake going into the presentation.

CEO Mary Barra said GM plans to allocate more than $20 billion in capital toward its electric vehicle and autonomous vehicle programs, along with substantial engineering resources. GM intends to get as many electric vehicles on the road as possible, with the hope of selling 1 million electric vehicles per year in North America and China by the middle of the next decade. 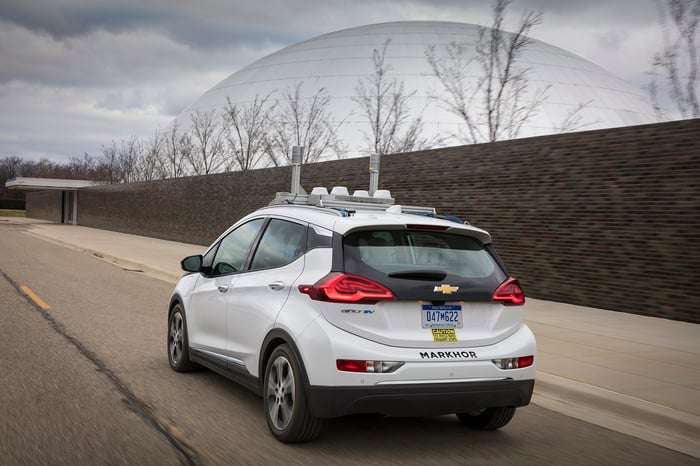 Barra sees electric vehicles as an important growth driver for General Motors because of the new demographics they bring in the door. The CEO noted that three-quarters of those who bought the Chevy Bolt electric vehicle are new to GM, and they've become loyal to the automaker. To that end, GM hopes to create an entire ecosystem to support its vehicles, including charging facilities and new battery technology to rival Tesla's advances.

Even with its plans, General Motors still has a market capitalization that's less than a third of what Tesla fetches. And though it has massive resources to dedicate toward electric vehicles, GM has a long way to go before it can catch up to its nimbler rival.

Shares of Cronos Group finished higher by 12% after the cannabis company got favorable remarks from analysts. After watching the stock plunge in recent months, investors were pleased to see the change of pace for Cronos shares.

Analysts at MKM Partners raised their rating on Cronos from neutral to buy. The move followed a big move down for Cronos' stock the previous day, with investors reacting negatively to news that the cannabis company would have to delay the release of its annual report. In MKM's view, the fact that issues related to its bulk wholesale cannabis business were the primary reason for the delay in the annual report made the incident unimportant, because the wholesale area isn't the key driver of performance for Cronos.

MKM believes that Cronos' relationship with Altria Group (MO -0.13%) will continue to give it a strategic edge that could come in handy in the future. Even so, though, MKM's optimism was limited, as the analysts actually cut their price target from 12 Canadian dollars per share to CA$11 per share.

Even with today's move higher, Cronos has still lost more than three-quarters of its value over the past year. It'll take a lot more positive news to restore confidence in Cronos and in the marijuana stock sector more broadly.