General Motors (GM 5.55%) will spend $20 billion by 2025 to launch a range of battery-electric vehicles powered by new low-cost batteries, CEO Mary Barra said in a presentation to investors and media on Wednesday.

Barra's presentation was one of a series intended to show investors and media that GM will be a major player in the emerging world of electric and automated vehicles.

The key element of GM's strategy is a new lithium-ion battery, called Ultium, that GM said will give it engineering flexibility while reducing battery cell costs to less than $100 per kilowatt-hour. 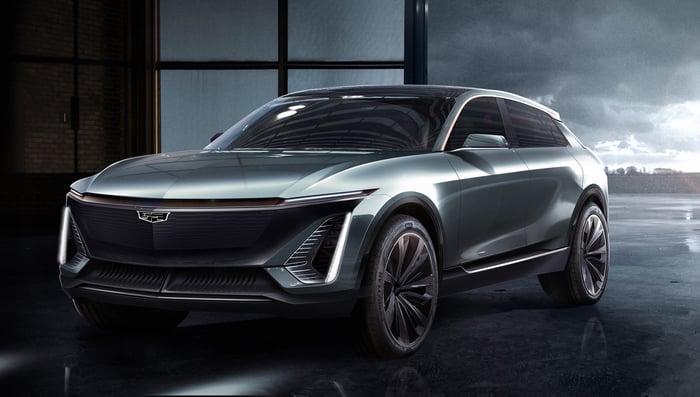 The first of GM's new electric vehicles will be the Cadillac Lyriq, a five-passenger SUV to be revealed in April. Image source: General Motors.

Batteries are the most expensive components in electric vehicles. GM has said for several years that the $100-per-kilowatt-hour level is the point at which electric vehicles will become cost-competitive with internal-combustion models.

GM is revamping a Detroit factory to assemble its electric vehicles. The batteries, developed in partnership with LG Chem, will be made in a new factory in Ohio.

Those batteries will power new electric vehicles for all four of its U.S. brands: Buick, Cadillac, Chevrolet, and GMC. GM said that the new electric models will include a revamped Chevrolet Bolt and a related SUV, a new electric Hummer SUV for GMC, new crossovers for Buick, and several Cadillacs, including a hand-built luxury flagship.

The first of the new electrics, a Cadillac SUV called the Lyriq, will be shown next month, GM said. Now that GM has shown its hand on its bold, new electric vehicle strategy, it's time to execute.