Please ensure Javascript is enabled for purposes of website accessibility
Log In Help Join The Motley Fool
Free Article Join Over 1 Million Premium Members And Get More In-Depth Stock Guidance and Research
By Lawrence Rothman, CFA - Mar 4, 2020 at 10:24AM

Starbucks’ strong brand and growth prospects make it worth a spot in your portfolio.

Starbucks (SBUX -0.05%) made waves in late January when it reported results for the quarter that ended Dec. 29, 2019, with the shares slumping by more than 10% since then.

The stock's fall wasn't due to the results, which were strong. The 7% sales growth in the quarter was partly driven by a 5% increase in comparable sales (comps). And management's long-term growth goals are 7%-9% for revenue, 8%-10% for operating income, and at least a 10% yearly increase in earnings per share.

In short, Starbucks checked all the boxes in its first quarter, even handily beating its profitability goals.

But numbers aren't everything. Starbucks has been among the companies hit by the novel coronavirus. I expect the impact on the business to be only temporary, and the company's strong brand and market opportunity both domestically and internationally will have shareholders singing a different tune shortly. 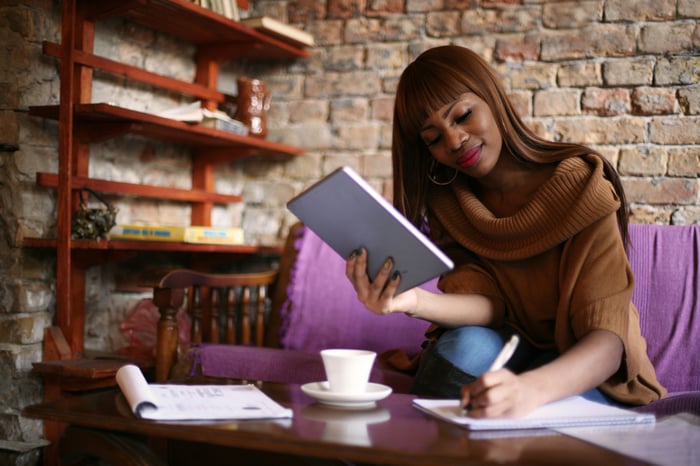 Starbucks' earnings release included an announcement that it had closed more than half of its stores in China and was continuing to "monitor and modify the operating hours of all of our stores in the market" due to the virus.

Management couldn't quantify the impact on the company's fiscal second-quarter results, but it noted that China's stores accounted for 10% of sales in Q1 and "we expect these events to have a material impact on our international segment and consolidated results for the second quarter and full year of fiscal 2020." The company was going to raise its fiscal 2020 guidance but decided to hold it steady at a 3%-4% increase in comps, revenue growth of 6%-8%, and an operating margin expansion.

China has been a growth area. Last year, Starbucks opened more than 600 stores in the country, bringing the total to over 4,100. This is 13% of the worldwide total of company-operated and licensed stores.

On the first-quarter earnings call, CFO Patrick Grismer said the company would provide an update when it had a better feel for the impact of the virus. "In any event, based on what we currently know, we expect the impact to our business will be temporary. Our brand is very strong in China and our confidence in the profitability and growth potential of this business is undiminished," he said.

There was some good news recently. Starbucks noted on Feb. 27 that 85% of its stores in China were open for business.

Now, Starbucks is not going to make up the sales it lost while stores were closed. But since this was not a Starbucks-specific issue, I'm optimistic about things getting back on track in this high-growth market.

But things are not totally rosy yet, especially as the virus spreads in the United States, where there are 15,000 company-operated and licensed stores, nearly half its total. While I don't expect the company to shut down a lot of U.S. stores, the illness and the precautions people are taking to avoid it could result in lost sales. But even if that happens, I expect business as usual once the outbreak passes.

Starbucks' long-term growth story remains appealing. The brand is well-known for premium products. It is mostly identified with coffee, and beverages accounted for 60% of the company's fiscal first-quarter revenue. The "other" category, which is comprised of packaged and single-serve coffees and teas as well as other items such as ready-to-drink beverages and license revenue, generated 22% of revenue. Food sales were responsible for the remaining 18% of Starbucks' top line.

Starbucks still has room to add more stores across the globe. It has been expanding in the United States and high-growth international markets, particularly China. Last year, it added 435 company-operated and licensed stores in the U.S. Internationally, Starbucks opened over 1,300 stores. Over the last few years, Starbucks has added 1,900 to 2,300 stores per year.

It keeps the brand strong by continuing to innovate. This includes a "global coffee alliance" with Nestle aimed at bringing Starbucks products into more homes.

The company's social mission, long ingrained as a core part of the company's values, helps attracts customers, particularly millennials. Recent moves include a $10 million investment designed to spur small business loans in Chicago communities and moves to eliminate plastic straws in its stores.

As Starbucks demonstrates, shareholder value and a social mission are not mutually exclusive. There is a history of annual dividend increases, with November's quarterly payout increased by 14% to $0.41 a share.

The company also uses part of its cash flow to repurchase shares. For the first fiscal quarter of 2020, it expended $1.1 billion, paying an average price of about $84. The recent slump in the stock price means this has not yet been an efficient use of capital, but I expect it will prove astute over time.

If anything, Starbucks deserves kudos for taking swift action by shutting down its Chinese stores. With the growth story intact, the stock's price drop creates an opportunity for investors.