The warehouse shopping operator is often overlooked in favor of its chief rival.

Over a wider time frame, however, shareholders have been less sanguine: BJ's stock has declined by 12% during the last 12 months, leaving it at $22.50, which is in the ballpark of its June 2018 IPO pricing of $17 per share.

It's no chore to grasp the market's skepticism, as BJ's lives under constant comparison to warehouse club juggernaut Costco (COST -3.15%). At $155 billion in trailing-12-month revenue, Costco's top line is roughly 12 times that of BJ's $13 billion in annual revenue. Yet in its fiscal 2019 year, Costco expanded revenue and comparable-club sales (excluding gasoline) by 7.8% and 6.1%, respectively, while BJ's grew its own fiscal 2019 revenue by just 1.4% and increased comparable-club sales by a meager 1.3%. 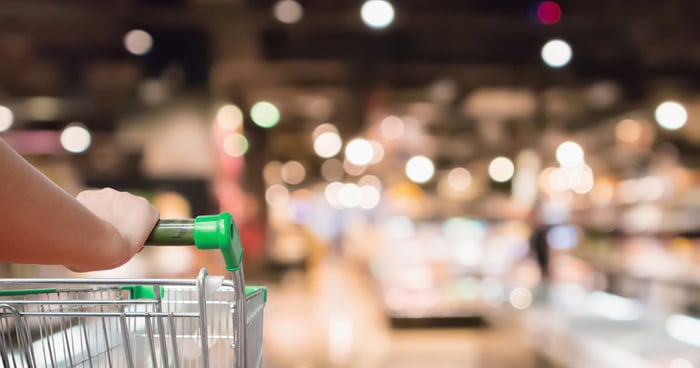 Costco's ability to push its top line forward through a mixture of store openings, strong comps, and rising e-commerce sales, even at its comparatively larger size, has earned it an avid following, and the COST symbol has enjoyed a stellar appreciation of 45% over the last 12 months.

But did the market take too much of a shine to Costco? When you line these companies up by two popular pricing metrics, forward price to earnings (P/E) and enterprise value to EBITDA (earnings before interest, taxes, depreciation, and amortization), Costco's success exposes two possibilities. First, its stock may be priced to perfection, and second, BJ's Wholesale Club's stock is potentially a relative bargain by comparison: 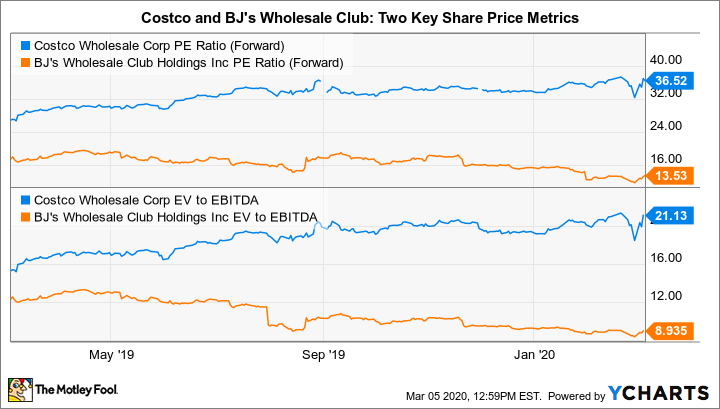 Investors undoubtedly prize Costco's knack for growing earnings at a stable 2.25% annual net profit margin via its high-single-digit top-line momentum. But they may be missing BJ's own rising earnings power. As the company has lapped expenses associated with its IPO and focused on productivity and its merchandise mix, BJ's EBITDA margin (i.e. EBITDA as a percentage of total sales) has gradually climbed to nearly equal Costco's margin: 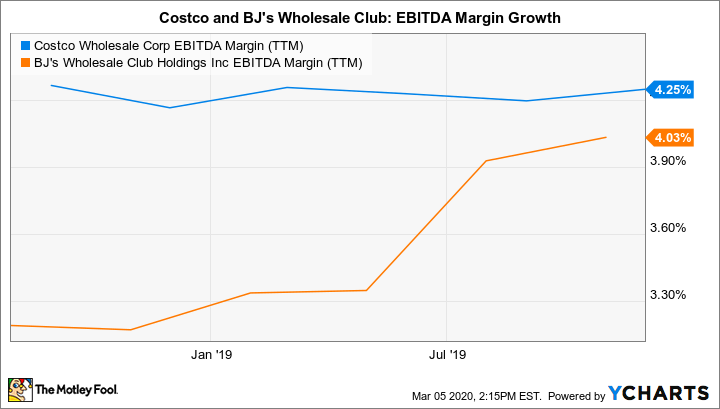 Expect this margin to rise further in the coming quarters. BJ's launched a new productivity initiative in the fourth quarter of 2019 called "Project Momentum," which is focused on cost reduction within a two-year span. The company intends to invest savings from Project Momentum into growth opportunities. In other words, if management executes competently on this project, the company could conceivably lift gross margin (and as a consequence, EBITDA margin) while simultaneously accelerating sales.

On the deployment of future cost savings, management stated the following in Thursday's earnings release: "These investments will be disciplined, growth oriented and anchored in the strategic pillars -- acquire and retain members; deliver value to keep them engaged; make it more convenient to shop and expand our reach."

The focus on member acquisition is well-advised. BJ's was able to increase its membership revenue by 7% in fiscal 2019, to $302 million. While this is a small component of total revenue, it carries an extremely high margin relative to sales operations, and thus plays an outsize role in net earnings. Like Costco, BJ's relies on membership growth to drive annual earnings per share, and even a few percentage points of acceleration in this revenue stream will favorably impact earnings in the coming quarters.

In sum, in the wholesale shopping-club space, Costco tends to draw most of the interest among investors -- and perhaps deservedly so. But as BJ's Wholesale Club steadily nudges its profitability forward, it looks increasingly like a relative bargain against its mammoth, high-priced peer.

Why BJ's Wholesale Club Stock Plunged 16% at the Open Today