Please ensure Javascript is enabled for purposes of website accessibility
Log In Help Join The Motley Fool
Free Article Join Over 1 Million Premium Members And Get More In-Depth Stock Guidance and Research
By Daniel B. Kline - Mar 5, 2020 at 8:36AM

The company is testing upgrading some of its traditional restaurants.

Yum! Brands'(YUM -0.14%) Taco Bell plans to expand its Cantina brand by opening new locations and converting some existing locations to the higher-end concept. The chain's Cantinas, which have a different menu than its regular eateries and sell alcohol, brought the brand from its traditional suburban markets into higher-populated urban areas.

"Cantinas reflect fast-paced environments and consumers with tech-forward innovations like kiosks and digital menu boards," the company explained in a press release. "Since unveiling its first Cantina in 2015, Taco Bell has introduced more than 60 urban restaurants across the nation." 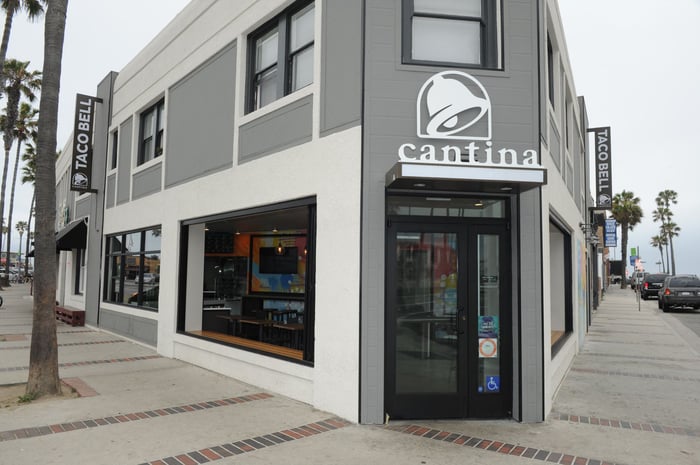 Leadership wants to grow the Taco Bell brand to $20 billion in annual revenue and 10,000 locations by the end of the decade. Cantinas will be a major part of that. Part of making that happen will include opening new Cantina locations and converting some existing locations to the more upscale concept.

"By tapping into cultural insights, we've learned that our customers want to engage with the brand in a way that amplifies their social nature," said Taco Bell President Mike Grams. "We are once again pushing the boundaries of the traditional [quick-service restaurant] dining experience by setting the stage for our 'fast-social' restaurants, which introduce dynamic dining rooms and lean into social gatherings."

Cantinas give Taco Bell another weapon to wield in the competitive fast-food/fast-casual market. It's higher-end but still a quick-serve concept that elevates the brand, potentially bringing in a new audience. Adding more of these locations should help the company achieve its ambitious growth goals.