Please ensure Javascript is enabled for purposes of website accessibility
Log In Help Join The Motley Fool
Free Article Join Over 1 Million Premium Members And Get More In-Depth Stock Guidance and Research
By David Haen - Mar 6, 2020 at 8:30AM

Who doesn't love a good sale? With the markets in turmoil and little idea when it will end, healthcare investors can seize the opportunity to snap up discounted shares of quality companies.

Here, I explore six attractive small and mid-cap biotechs with valuations greater than $5.5 billion. These established companies expect to generate revenue between $450 million and $2.4 billion in 2020. Yet due to market conditions, their stock prices have dropped between 10% and 35% this year. 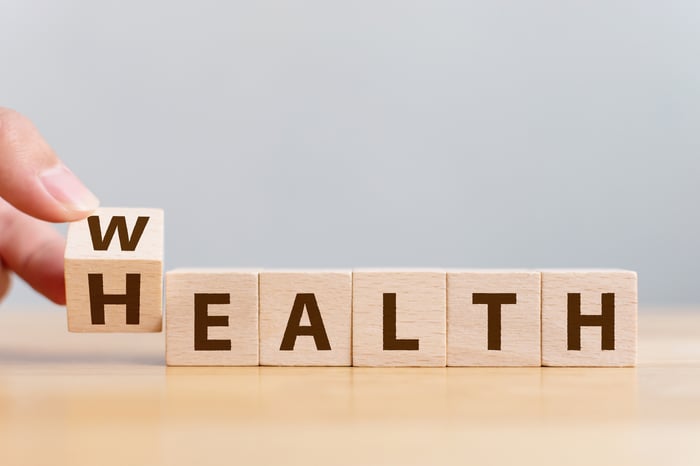 Acadia Pharmaceuticals (ACAD 1.57%) markets Nuplazid, a treatment for hallucinations and delusions associated with Parkinson's disease psychosis. A 2018 scientific study estimated that Parkinson's disease will affect more than 1.2 million people in North America in 2030,and about half of those will experience hallucinations or delusions. Acadia reported $339.1 million in revenues for Nuplazid in 2019, a 52% increase over the prior year.

Importantly, Acadia plans to file for Food and Drug Administration approval of Nuplazid for dementia-related psychosis, a condition that the company claims is a ten-times-larger patient population. To prepare, Acadia is expanding its sales force from 200 to roughly 500 people. The company expects 2020 Nuplazid sales to reach between $440 million to $470 million, a 34% increase year-over-year at the midpoint of the range.

After posting record revenue of $429.8 million in 2019, Amarin (AMRN -1.62%) expects the growth to continue in 2020. Revenue guidance for the year ranges from $650 million to $700 million. Amarin has nearly completed doubling its sales force to about 800 people to help achieve this.

Vascepa, Amarin's marketed product, gained a second, extremely important FDA approval in December. Vascepa demonstrated that it can help reduce cardiovascular events in patients with high risk for cardiovascular issues. Millions of patients stand to benefit from this drug being approved by the FDA to mitigate this risk. Despite consistently growing sales, the stock dropped 35% from the start of the year, making it a top biotech stock to buy right now.

This cancer diagnostic developer has taken investors on a choppy ride over the past few months. While sales grow for Cologuard, a non-invasive test for colorectal cancer, Exact Sciences (EXAS -1.29%) will see the fruits of its $2.9 billion acquisition of Genomic Health completed last November. Revenues for 2020 are expected to be in the range of $1.61 billion to $1.64 billion, giving Exact an attractive price-to-sales ratio of roughly 6.7.

The stock dropped significantly last week, primarily due to a $1 billion financing of convertible debt. Investor demand drove an increase of $150 million in the amount Exact raised. With additional money in the bank and a stock price 30% lower than the start of the year, investors should revisit Exact Sciences now.

Cabometyx, Exelixis' (EXEL -0.72%) drug for certain kinds of kidney and liver cancers, brought in $760 million in 2019. The company expects 2020 sales to range from $850 million to $900 million, with roughly 85% attributable to Cabometyx. While appearing to fire on all cylinders, the stock lost about 15% of its value.

What makes Exelixis more attractive than most? Well, it's profitable, a rarity among most small and mid-cap biotechs. It relies heavily on a single product despite recent efforts to bolster the research and development pipeline. For these reasons, Exelixis remains a perennial favorite among prognosticators as a potential M&A target.

Jazz Pharmaceuticals (JAZZ 0.72%) witnessed its stock lose 25% this year despite rosy expectations for 2020. The company provided guidance that revenues from a portfolio of products will range from $2.32 billion to $2.4 billion. Jazz posted 2019 sales of $2.16 billion. Not too shabby. Despite this, the company's value sits at 2.8 times sales. That gives it a market cap of $6.5 billion.

Adjusted net income rose to $934 million in 2019, an increase of 11% from the prior year. On a per diluted share basis, the net income increase was from the prior year was 18%. Granted, part of the per share performance was due to the company buying back 2.25 million shares in 2019. Clearly, investor expectations are low. Therefore, any chance to pick up shares in a stable company generating more than $2.3 billion in sales seems like a no-brainer.

Only down 10% for the year, Seattle Genetics (SGEN 0.33%) stock has been spared compared to some others on this list. It also boasts the largest valuation of the group, coming in at $18.7 billion. Investors should still see the current situation as a buying opportunity.

Seattle Genetics guided to 2020 revenues of $810 million to $865 million with a caveat. Padcev, the company's drug approved in December for metastatic urothelial cancer, is a potential blockbuster and not included in the estimates. Urothelial cancers account for more than 90% of all bladder cancers, the sixth most common type of cancer. Additionally, the FDA just accepted the New Drug Application for Seattle Genetic's tucatinib, its FDA-designated Breakthrough Therapy for certain types of breast cancer. With two new promising drugs on the horizon, investors should grab the stock on any dips.

Investing in biotech can feel like running a gauntlet. Risks run rampant. However, buying these high growth biotechs at attractive prices can yield substantial upside over the long term. The stability of these revenue producing, and in some cases profitable, businesses can help investors sleep at night even if the broader economic climate is in a whirlwind.