The company has been busy signing new types of contracts that will provide long-term revenue.

In recent months, Dominion Energy (D 0.76%) has signed long-term renewable energy contracts with a Virginia university and an entire county. The company also entered into a new deal to supply Amazon.com and won approval from state regulators to test new types of battery storage.

It's time to look at how revenue for contracted renewable energy is figuring into the company's overall financial picture. 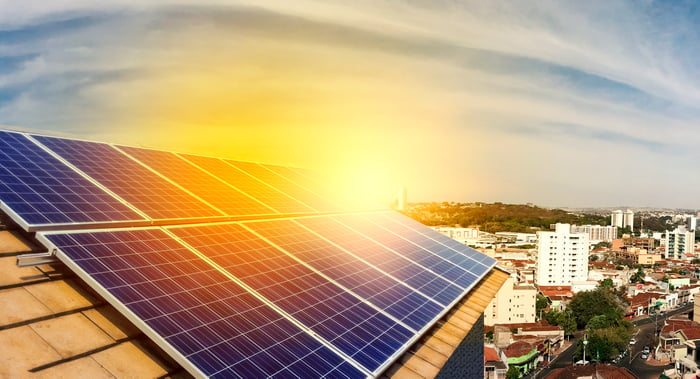 Powering a university and an entire county

Earlier this year, Dominion entered a power purchase agreement (PPA) with William & Mary, a university in Williamburg, Virginia. The William & Mary agreement will extend for 20 years and will enable the university to source nearly 50% of its power consumption from renewable energy. The university chose the PPA option since it found it too difficult to build on-site solar of any substantive size on campus.

In Arlington County, Virginia, Dominion agreed to provide power from a solar farm in the southern part of the state to help the county surpass its goal of sourcing at least 50% of its power from renewables by 2022. The solar facility is expected to power all county buildings, streetlights, traffic signals, water pumping, and wastewater treatment. "This is a groundbreaking partnership for the county," said the county board chairwoman, Libby Garvey. "It will take us a long way toward our goal of 100% use of renewable sources for all electricity used in government operations by 2025."
Arlington County is believed to be first locality in Virginia to sign a large PPA for off-site solar with an investor-owned utility, and it is potentially a trend that could take hold elsewhere. Dominion's efforts in this space are important for a utility looking to maintain profitability over the long term because customers are increasingly gaining access to supply options that are outside the traditional utility "service territory" model. Under a virtual PPA structure, for example, a customer can sign a deal for power credits from a project outside the area where the customer operates. The company can still claim it uses 100% renewable power but is freed from the constraints of a local utility's renewable offerings.

Dominion and Facebook said earlier this year they are expanding a joint effort to increase renewable energy generation by constructing a new solar facility in Greensville County, Virginia.

The 100 MW Sadler project is expected to become operational by the end of 2020. The agreement between the companies is structured so Dominion Energy will build, own, and operate the solar facility, and Facebook will purchase the environmental attributes generated. These are tradeable, market-based instruments that represent the rights to one megawatt-hour of renewable electricity generation.

The solar plant will be the eighth Dominion project that will support Facebook's operations in Virginia and South Carolina.

Dominion's deals with Amazon are important because they create a renewable energy buying template that can be expected to be used by other corporations. This is particularly true as more and more companies commit to using 100% renewables. To date, a total of 226 companies have joined Re100, a corporate leadership initiative that aims to bring together businesses committed to 100% renewable electricity.

In early February, Dominion received approval from the State Corporation Commission to move forward with four battery storage pilot projects in Virginia. The company expects the projects to improve its grid reliability and pave the way for storage technology it will need to support a plan to achieve net zero carbon and methane emissions by 2050.

The four utility-scale battery storage projects totaling 16 megawatts are the largest of their kind in Virginia and will use lithium-ion batteries, like those found in electric vehicles. Dominion said it hopes to better understand how the technology can be integrated into new applications that will benefit customers.

Dominion said on its Q4 earnings conference call that its efforts to modernize, strengthen, and improve the sustainability of its grid represent a "customer-focused approach" that benefits shareholders by enabling the company to meet and affirm financial guidance, including a 16th consecutive quarter of meeting or exceeding its guidance midpoint. Adding batteries to its fleet will also be essential as the company adds other renewables since they can serve to maintain grid reliability and provide power during periods of peak demand.

Will renewables move the needle?

Dominion Energy has been aggressively pursuing renewable energy projects for the past several years. Its investments in renewables have not yet had a major impact on earnings to date, but should represent a bigger piece of the picture in the coming years. And despite the company's significant holdings in fossil fuels and nuclear generation, the company's efforts in contracting with a university, a city, and a major technology corporation demonstrate an anticipation of customer needs and may reward investors through an expanding book of long-term contracts.

With a market capitalization greater than $70 billion, the company's contracted generation segment represented only 5% of its overall business at year end. But as the company works on reducing its reliance on coal over time for its utility customers, this percentage should be expected to increase, particularly as the company has demonstrated efforts to enter specialized sales agreements to meet the needs of large commercial and industrial buyers.

The company underperformed the S&P 500 over the past year and over the last decade, and gross margin lags the industry median of 78.8%, coming in at just under 50% at year end. But the company has a dividend yield at just over 4.8% and a diverse portfolio of nuclear, gas-fired, and liquefied natural gas assets, so investors would be wise to keep an eye on Dominion. Its considerable efforts to prepare for increased customer demand for renewable power increases resource risk if the wind doesn't blow or the sun doesn't shine as projected. But placing more modern plants and batteries on the grid also has the potential for increased operational efficiency that could translate into cost savings and increased profitability, therefore increasing the probability of a stable and growing dividend.