Please ensure Javascript is enabled for purposes of website accessibility
Log In Help Join The Motley Fool
Free Article Join Over 1 Million Premium Members And Get More In-Depth Stock Guidance and Research
By Rhian Hunt - Mar 6, 2020 at 7:26AM

Plant-based meat substitutes’ long-term viability could be shaken by a new contender.

Some analysts predict the emerging science of cultured meat -- aka lab meat or synthetic meat -- could threaten the market share of "plant-based meat" producers like Beyond Meat (BYND 1.80%), Impossible Foods, and others in the near future. Growing meat separate from an animal might possibly solve the ethical, environmental, and culinary issues of meat and meat substitutes in one fell swoop. But while Fools investing in food stocks centered on plant-based meat may wonder whether lab meat threatens their portfolio's value, other evidence suggests it might be a proverbial "nothingburger" after all.

Not your granddad's meat and potatoes

People first thought about cultured meat in the 1930s, and scientists grew the first meat outside an animal in the early 1970s. However, methods are just now getting sophisticated enough to produce affordable, high-quality lab meat.

To grow cultured meat, scientists place animal cells (muscle stem cells, fat cells, and collagen) in a nutritional medium inside a bioreactor where they can multiply. Artificial circulation carries nutrients and oxygen to the multiplying cells. The overall process is called "cellular agriculture." 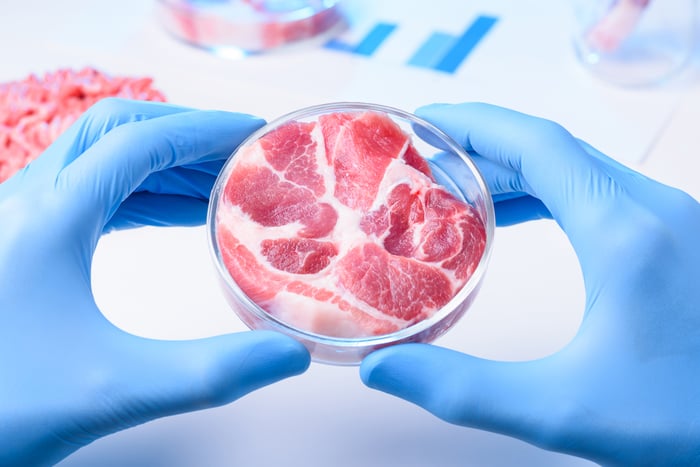 Based on these factors, some analysts expect explosive growth in lab meat once it's launched in the next few years. A.T. Kearney projects a compound annual growth rate (CAGR) of 41% for cultured meat between 2025 and 2040, capturing 35% of the global meat market by 2040. During the same period, they predict 9% CAGR for plant-based meats. Additionally, plant-based meat growth is front-loaded in their model, slowing rapidly and gaining less than 0.5% annually closer to 2040, for a total 25% market share. Conventional meat, in their projection, will experience negative growth, shrinking at 3% annually and dwindling to 40% of the market.

Cultured meat is still too expensive for mass appeal or budgets, but its price trajectory over the past few years shows an exponential drop as technology rapidly improves. In 2013, Professor Mark Post produced the first fully cultured hamburger for slightly more than $300,000, or $1.2 million per pound. By 2017, four years later, Memphis Meats grew chicken meat via cellular agriculture for $9,000 a pound, slashed to $1,000 per pound the following year. One year after that, in 2019, Aleph Farms managed to create lab beef for $100 per pound.

Commercial production of cultured meat appears from these figures to be on the cusp of feasibility. The first lab meats may feature on restaurant menus or perhaps specialized grocery shelves in 2020 or 2021. Simply producing the meat at an affordable price doesn't ensure its dominance over standard meat or plant-based meats, though. Lab meat still needs to prove how it stacks up against these established alternatives.

Plant-based meats and cultured meat will probably go head to head in three main areas to determine which will win the biggest market share: ethics, environmental impact, and flavor. While lab meat has strengths in each of these areas, plant-based meats have also come a long way from the limp, tasteless, poorly textured soy patties of yore. Some of lab meat's advantages might not be as large as certain analysts paint them.

When it comes to ethical considerations, it's very difficult to measure potential changes in consumer preference, especially among vegans and vegetarians. Nevertheless, plant-based meats appear to have an unassailable advantage in this area. Since they are made of plant ingredients, they are fully vegetarian and vegan. Cultured meat, on the other hand, still carries potential ethical baggage from the viewpoint of vegans.

Nevertheless, lab meat could potentially capture some of the vegan market among those less concerned with deeper ethical questions, and who simply object to killing animals. Similarly, some people who currently eat meat might switch to lab meat, preferring a "killing-free" alternative even if they'll eat standard meat in the absence of cultured substitutes. Lab meat could also potentially make market inroads in so-called "mixed" households where meat-eaters and vegans live together, helping make the "carnists'" dietary preferences less objectionable to the vegans.

According to Piplsay research, 15% of Americans have tried plant-based meat substitutes because they wanted to go vegan or vegetarian, but wanted a way to sate their meat cravings. Though nowhere near a precise analog, this statistic might give a vague clue about the minimum percent of vegans who might be expected to try lab meat.

Cultured meat advocates cite the eco-friendly nature of their product, which uses much less water and land than livestock farms while moderately reducing energy use. However, according to research carried out jointly by Impossible Foods and Quantis, plant-based meats offer practically identical environmental benefits -- though that study did not measure energy use:

Taste, texture, "mouthfeel," practical use in meat-based recipes, and other measures related to the culinary appeal of meat substitutes are the third area where lab meat needs to prove itself competitive. Where early soy patties were once disgusting to many people, with a flavor quite unlike meat, unpleasant texture, and failure to match the appetizing qualities of actual meat, today's plant-based meats are built to emulate the experience of eating meat as closely as possible.

Beyond Meat, Impossible Foods, and other makers are pouring dollars into plant-based meat research and innovation, making their products as close to meat as possible. Traits engineered into the plant-based meats include correct firmness, juiciness, darkening from pink to brown as they cook, and even "bleeding" for those who want a rare burger or steak.

According to taste testers from Food & Wine, at least, the wizards in Beyond's and Impossible's labs have largely succeeded, very closely imitating the taste of actual meat, creating suitably crumbly burgers that taste right with condiments and match up to the correct texture and juiciness. Other brands are less successful, tasting more like "veggie burgers" than meat.

As far as lab meat is concerned, those who have tried it and reported on the experience say that it tastes rather like chicken or beef found in McDonald's food. While some people might judge that a somewhat dubious recommendation, lab meat will likely hold its own alongside standard burgers and chicken, and the better plant-based meats. We'll need to wait and see whether that's significant enough to make a difference when plant-based alternatives taste much the same.

Lab meat's challenge may be all hat, no cattle

While commercial cultured meat is clearly coming soon, Beyond Meat and Impossible Foods can probably rest easy as long as they don't get complacent. Their products already closely emulate the experience of eating meat, while avoiding all the ethical issues and matching cellular agriculture one-for-one in terms of eco-friendliness.

Lab meat, once cheap enough for common consumption and improved enough to have culinary appeal, will undoubtedly win over some converts. Some vegans may want to return to the experience of eating "real" meat without the guilt, while some meat-eaters will prefer killing-free meat even if they're not willing to go to extent of eating plant substitutes in order to get it. Mixed households might find it useful for keeping the peace in the kitchen while still giving everyone the dietary items they want.

However, cultured meat's rise to dominance, as predicted by some analysts, seems a somewhat improbable scenario. Plant-based meats got there first, offer the same eating experience, and lack some of cultured meats' lingering downsides. Beyond Meat, Impossible Foods, and other plant-based meat producers will likely enjoy strong long-term viability despite cellular agriculture – and, if its upsurge appears strong enough, they may have the cash on hand to simply acquire some of the best new brands and use their existing infrastructure to turn them into an even bigger success.