Let's put this volatility into perspective.

It's been a rough couple of weeks for Tesla (TSLA -0.06%) stock. But long-term shareholders in the electric-car maker are likely to be easily brushing off the pullback's impact to their portfolios. After all, shares are still up considerably from where they were just six months ago.

Here's a close look at the stock's sharp 23% decline since Feb. 19 and what investors should make of it. 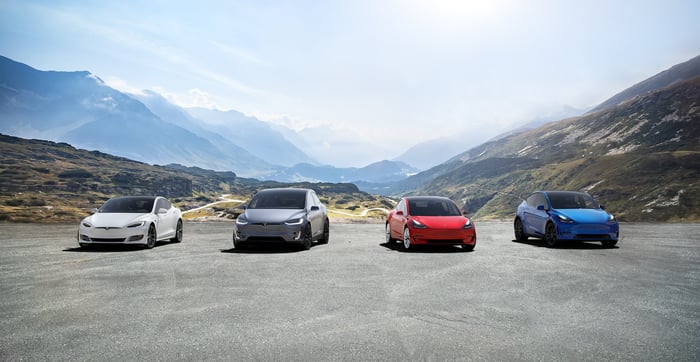 Coronavirus fears have played a key role in the stock's decline

Earnings and analyst price target changes are often some of the main drivers for sudden jumps or declines for growth stocks like Tesla (TSLA -0.06%). While there has been some commentary from analysts over the past few weeks, it's been both positive and negative. Furthermore, there haven't been any major announcements from Tesla over this time period. So what's driving Tesla stock in a downward trend recently?

The primary reason for Tesla stock's recent drop is probably the overall market sell-off over concerns about the spread of the coronavirus. The S&P 500 has slid 12% since Feb. 19. Many growth stocks like Tesla have seen an outsize decline during this market pullback as investors scale back their bets on pricier stocks.

Investors should keep in mind that a 20%-plus sell-off in Tesla stock doesn't automatically make shares cheap. The electric-car maker's stock still has a price-to-sales ratio of 5 and a forward price-to-earnings multiple of 78. A valuation like this prices in strong double-digit growth in revenue and operating income for years to come.

Buying a stock just because it has fallen can be a mistake. Investors should carefully consider the execution and growth baked into Tesla's stock before they buy shares in the aftermath of this decline.

On the other hand, the stock is certainly more attractive than it was a few weeks ago. Tesla's price-to-sales ratio was closing in on 7 when shares hit a 52-week high in February.

Shares have more than tripled in six months

Investors should keep Tesla stock's recent volatility in context. In the six months leading up to Feb. 19, shares had climbed 290% as investors cheered Tesla's fast-growing vehicle deliveries, a profitable fourth quarter, and strong free cash flow for the full year. It's completely natural, therefore, for the stock to take a breather after such a huge run-up.

Furthermore, it's worth noting that even after the stock's decline over the last few weeks, Tesla shares are still up 219% over the past six months.

In 2020, Tesla will have to prove to investors that it's worth its premium valuation. Investors will be looking for a successful Model Y launch and subsequent production ramp-up for the new product, rapid growth in total deliveries and revenue, and sustained positive free cash flow.