The long-suffering merger with Sprint brushed aside the final major challenge in February, setting the stage for the final John Hancocks.

Shares of T-Mobile US (TMUS 0.84%) rose 13.9% in February, according to data from S&P Global Market Intelligence. The North American cell network operator cleared the last major hurdle on the way to completing a merger with smaller rival Sprint (S).

U.S. District Court Judge Victor Marrero ruled against a lawsuit filed by several state attorneys in a bid to stop the $28 billion merger. The suit argued that the deal would reduce competition and raise prices in the American telecom sector, but Marrero disagreed. The proposed deal "is not reasonably likely to substantially lessen competition" in the wireless markets, he said, arguing further that Sprint probably wouldn't last long as a fourth nationwide competitor without this merger, and that DISH Network (DISH 11.60%) should be able to become that fourth major competitor when Sprint and T-Mobile offload their prepaid wireless services to the satellite broadcasting veteran. 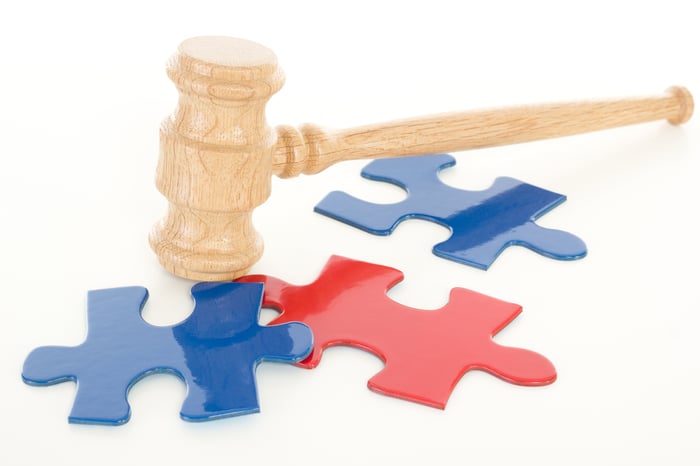 The court also noted T-Mobile's status as "a maverick that has spurred the two largest players in its industry to make numerous pro-consumer changes." The state attorneys worried that T-Mobile would raise prices or remove network features once the merger has been signed, but the company has a history of doing the exact opposite.

"The proposed merger would allow the merged company to continue T-Mobile's undeniably successful business strategy for the foreseeable future," the judge wrote.

The merger is now entering the home stretch, with only a couple of minor challenges left to settle. T-Mobile's investors embraced the ruling, and Sprint's shares more than doubled in February. T-Mobile is getting its hands on Sprint's valuable wireless spectrum licenses just in time to make the most of the 5G era and the related explosion of 5G-connected Internet of Things devices.