The rival deep-discount chain is struggling to maintain growth.

There's good reason to believe Dollar General (DG 1.76%) will have positive news to report when it issues its fourth-quarter earnings next week. Rival Dollar Tree (DLTR 1.09%) said it managed to eke out a sales gain for the period, but it was on the strength of its namesake brands, not the Family Dollar chain, which saw comparable sales swing into negative territory again.

That could be because Dollar General has been on a store-opening spree, with plans to open as many as 1,000 new locations this year. While Family Dollar is supposedly seeing more strength from the remodels of its stores, something it plans on accelerating in 2020, Dollar General plans to upgrade 1,500 mature locations itself.

The competitive pressures are strong, so let's take a closer look at what investors might see from the deep discounter when it reports earnings on Thursday, March 12. 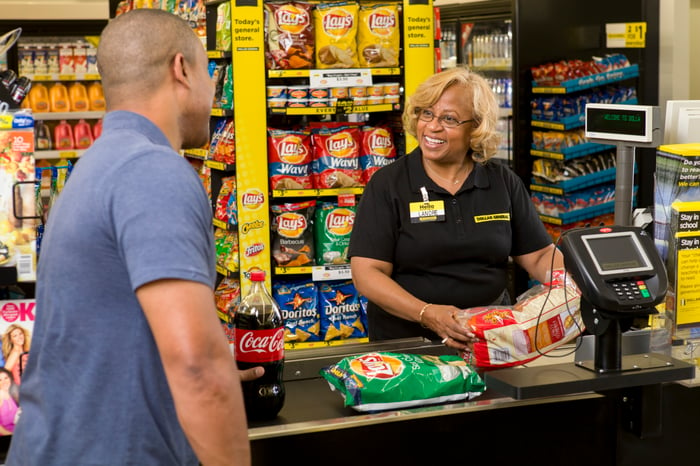 The discount chain has four primary pillars it's building upon, including new store openings, more nonconsumable goods, increased internal food distribution, and improved store efficiencies. They really began paying off last quarter, as sales rose across all categories, with the gains accelerating as time went on.

To keep growth going, Dollar General is focusing on both consumable and nonconsumable items, and increasing the available assortment of merchandise in the home, domestics, housewares, party, and occasion categories.

Management raised its full-year guidance last quarter based on the strength of its performance over the first three quarters of 2019, and it believes the momentum will carry over into the fourth quarter as well.

Dollar General expects net sales to grow around 8% for the year, fueled by comps in the low single-digit range.

Wall Street apparently thinks Dollar General is being conservative, since the consensus view for the retailer's earnings is $6.65 per share, though on sales the Street is forecasting $27.74 billion, which would equate to an 8% increase over last year -- in line with management's guidance.

Premium price for a deep-discount chain

Dollar General dodged a bullet when it lost out to its rival in acquiring the Family Dollar chain. The retailer had been the laggard of the deep discount stores in sales and profit growth, and Dollar Tree has since been weighed down by the purchase.

Although Family Dollar looked like it was starting to gain some traction with its makeover last year, it slipped back into negative territory again this quarter, a situation possibly exacerbated by Dollar General's own growth ambitions.

Because Dollar General has found the sweet spot of value, selection, and opportunity with consumers, the deep discounter's stock trades at a premium. So even though investors should be comfortable believing Dollar General will report another strong quarter, this might not be the time to go shopping for its stock.