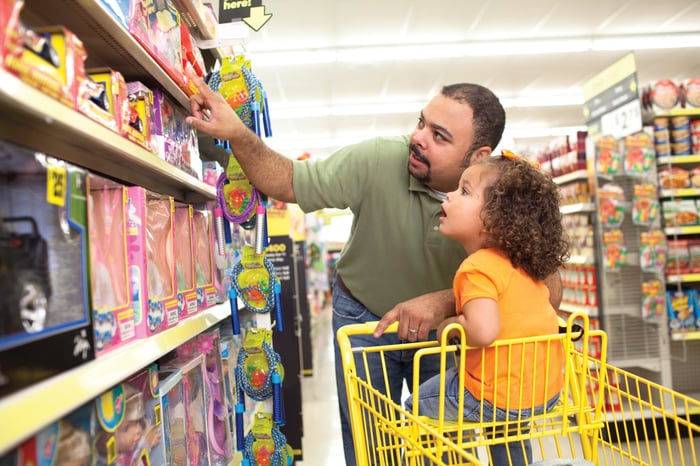 Going from strength to strength

It's tough to put enough superlatives on the retailer's performance. Growth occurred across all segments and all business lines, helping it steal market share, but the tempo of increases is also accelerating so that Dollar General is stepping up implementation of its various programs.

The retail chain is nailing the landing on each of its four main initiatives: opening more new stores, adding more non-consumable items to its shelves, building out internal distribution of fresh and frozen foods, and improving store efficiency and customer convenience by streamlining the shelf-stocking process.

In the earnings release, management noted it has planned for fiscal 2020 to include "1,000 new store openings, 1,500 mature store remodels, and 80 store relocations." Much of this is possible, because the company's non-consumable product expansion is being so well received by consumers. The increased assortment of merchandise in the home, domestics, housewares, party, and occasion categories will be in 2,400 stores by the end of the year, but Dollar General will now accelerate their introduction into 5,000 locations by the end of 2020.

The deep discounter's self-distribution plan, called DG Fresh, also gives it a chance to bring in more name-brand goods while expanding its private-label lines, such as its Good & Smart brand. It offers a host of better-for-you products that are now in 5,400 stores. It will be expanding their availability next year, with the potential to double the number of stores they're in, even as it expands the line into frozen, dairy, and deli products, making them even more accretive to profits.

Topping it all off, Dollar General is almost ready with its Fast Track productivity enhancer, which is well ahead of schedule and will allow it to achieve even better efficiencies in the future. It also has its own version of scan-and-go technology in its DG Go! app that allows customers to scan their items as they shop and check out via the app, and it plans to begin piloting a buy-online-pick-up-in-store option in the fourth quarter.

It's only getting better from here

Not much went wrong for the deep discounter this quarter, and it is truly one of those cliched "hitting on all cylinders" moments.

Because of Dollar General's performance over the first three quarters, it now expects net sales to grow in the low 8% range on a mid-to-high 3% increase in same-store sales. That's improved from its prior outlook of 8% growth on a low-to-mid 3% increase in comps. Similarly, operating profits are now expected to rise 6% to 8%, versus its previous outlook of 5% to 7% growth, and adjusted earnings are now anticipated to be in a range of $6.55 to $6.65 per share, compared to its previous range of $6.45 to $6.60 per share.

There's good reason Dollar General has been the top-performing dollar store, and the quarter's results indicate it will remain on top for some time.