China and the coronavirus are making things tougher for PPG than you think.

Shares of PPG Industries (PPG 0.76%) dropped 12.8% in the month of February, according to data provided by S&P Global Market Intelligence. The paint, coatings, and specialty materials company was already reeling under the pressures of weak industrial demand when the COVID-19 coronavirus outbreak emerged as a potent growth threat.

For PPG, the impact the coronavirus outbreak is having on important customers like car makers and aerospace juggernaut Boeing (BA -1.53%) is a major concern that appears to be worrying shareholders.

PPG shares were facing the heat after the company's fourth-quarter numbers and outlook for 2020 announced mid-January missed analysts' estimates. One of the most important markets for PPG is automotive, and demand depends a great deal on China.

China is, in fact, PPG's second-largest country by revenue and a major contributor to its sales from the Asia-Pacific and Latin American regions, which contributed 27% to PPG's total sales in 2019. PPG has 16 manufacturing sites in China, which together with its offices and technical centers employee nearly 4,000  workers. 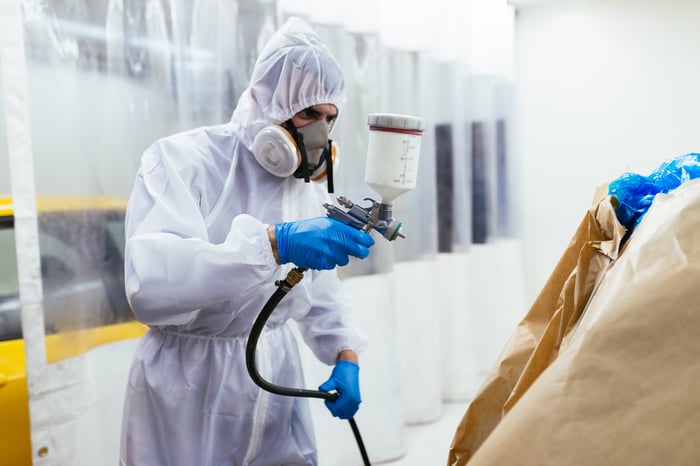 At a time when the auto market in China was already facing a severe sales slump, the last thing PPG wanted was another hurdle in the form of the coronavirus. Guess what? New auto sales in China slumped a staggering 80% in February as the coronavirus spurred lockdowns.

On the other side, airline stocks are getting battered as the coronavirus has stunted global travel and could hit order books, forcing companies like Boeing to curtail spending, at least in the near term. Boeing shares shed 13.6% in February on these fears. Such worrying news from key end markets was bound to hit PPG shares.

PPG's Q4 numbers may have disappointed the market, but the company reported 15% growth in Q4 net income and a 1% rise in net sales. Its earning from continuing operations of 1.23 per share was, in fact, a quarterly record despite end-market headwinds. PPG also completed two small acquisitions in February and is guiding for earnings per share (EPS) of $1.32-$1.42 for the first quarter of 2020, higher than the $1.31 in EPS it earned in Q1 2019.

The impact of the coronavirus on China's manufacturing industry and PPG's business, even if short term, has investors now worried that the company will be forced to roll back its guidance in coming months.

A Look at Bezos' Space Plans

A Look at What's Going on With SpaceX

Thinking About Investing in Air Travel? Listen to This.

Why Boeing Is in the News Again