Please ensure Javascript is enabled for purposes of website accessibility
Log In Help Join The Motley Fool
Free Article Join Over 1 Million Premium Members And Get More In-Depth Stock Guidance and Research
By Billy Duberstein - Mar 8, 2020 at 11:00AM

Don't rush in to buy just yet.

Since Disney (DIS 3.69%) shares are down nearly 25% from their all-time highs, some may feel compelled to scoop up as many shares of the House of Mouse as they possibly can. However, investors should be aware of the risks.

I'm a longtime Disney shareholder of many, many years, and I'm not selling my existing stake on the coronavirus scare. However, I'm not adding to my stake just yet, either. Furthermore, if I were putting new money to work, I'd be hesitant to buy Disney in a big way at this critical juncture. I'd prefer the large technology names to Disney in this coronavirus-inspired sell-off.

That may seem like sacrilege, as Disney has been a long-term winner and a premier brand. Yet consider this: After the recent sell-off, Disney's stock is up only 16.4% over the past five years, including dividends. That compares with a 58.6% gain for the S&P 500.

That may suggest all isn't so merry in the House of Mouse. If you're thinking of loading up on Disney stock at this perilous moment, there are three big risks to consider. 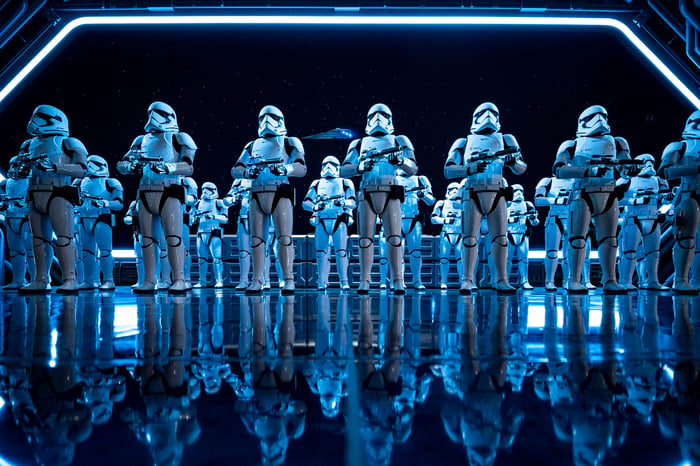 Its main profit centers are most at risk in 2020

Disney is no doubt coming off a solid quarter and year of execution. The company has pivoted strongly from its legacy media model, based on the cable bundle, to a leading player in streaming. After launching in November, Disney+ has very quickly amassed 28.6 million subscribers as of the company's February conference call with analysts. However, that transition is a work in progress, with legacy media networks margin compressing, and streaming still generating big losses because of investments in content and marketing.

In fact, of the $4 billion in segment operating income last quarter, some 58% came from the company's parks, experiences, and products division, and another 24% came from studio entertainment, with strong box office returns from Frozen II and Star Wars: The Rise of Skywalker.

Unfortunately, that's 82% of Disney profits that are now at high risk from the coronavirus scare. There are a certain amount of fixed costs involved in running a theme park or producing a big-budget movie, so if people stay away from theme parks and movie theaters through the rest of the year, these main profit centers could quickly evaporate.

Of course, if more and more people stay home, they're likely to view more content, either through the traditional cable bundle or streaming. That should benefit Disney's media divisions. The problem is that Disney management doesn't believe its streaming operations will generate a profit before 2024. Though Disney+ has jumped out to an impressive subscriber surge in its first quarter, it will have to reach 60 million to 90 million just to break even on its content costs over time. Feeding Disney+ will also lower licensing revenue for the studio division, because Disney will be licensing its films to itself, rather than to Netflix (NFLX 5.03%). Bringing the studio films in-house is estimated to cost Disney another $150 million in profit annually.

Investors of course have been aware of this, and they have certainly given companies like Netflix the benefit of the doubt for years, allowing streamers to eschew profit or cash flow in the name of subscriber growth. However, if streaming continues to rack up losses while also harming both linear TV and studio entertainment results, all while parks and entertainment profits evaporate, it's difficult to assess how investors might react to all of that at once.

Remember, unlike Netflix, Disney has long been very profitable and pays out a dividend. While investors seem to be giving the company the benefit of the doubt in the wake of the Twenty-First Century Fox acquisition and the launch of streaming, investors may grow impatient if Disney's profit levels decrease and stay well below what they're used to seeing.

A changing of the guard at the top

On top of all this uncertainty, CEO Bob Iger abruptly announced his retirement as CEO in late February, just when all of the coronavirus news was coming to light. Assuming the role is former parks and entertainment head Bob Chapek. Though Chapek is a 30-year veteran of the company and Iger expressed his utmost confidence in him, it will be hard to replace a CEO of Iger's stature.

Iger led Disney on a fantastic run over the past decade with the acquisitions of Pixar, Lucasfilm, and Marvel, leading to massive growth in the studio and parks divisions. Iger then stayed on well past the time he had originally planned to leave to defend Disney against Netflix's cord-cutting onslaught, acquiring BAMtech to launch Disney's streaming capabilities, and then capping things off with the massive $71.3 billion acquisition of Twenty-First Century Fox.

Chapek will be leading a company that's massive and much more complex than the one Iger inherited, and he may find it harder to grow, since growth is harder to come by the larger you get, and with streaming potentially cannibalizing other businesses.

To be sure, there are far worse companies you can buy than Disney amid this market sell-off; however, those who think Disney is a no-brainer at these prices may be disappointed. I certainly don't think the company is a sell, but I would be hesitant to leap in right now, as others are advocating.

I hope the virus is quickly dealt with and Disney's resorts and movie theater attendance get back to normal. However, even if they do, it's still an open question whether Disney will be able to seamlessly transition to a world of streaming. And if the virus gets worse and Disney has to shut down its U.S.-based parks, investors may get an even more attractive entry point in the near future.