Markets saw their biggest losses ever in point terms.

Monday brought new records for the stock market, suffering their largest single-day point drops ever. The Dow Jones Industrial Average (^DJI -1.56%), S&P 500 (^GSPC -2.01%), and Nasdaq Composite (^IXIC 0.00%) were all down 7% to 8% on the day, approaching the 20% pullback from their highs that would signal an official bear market.

The plunge in oil prices left many smaller oil and gas exploration and production companies with losses of 50% or more on the day. Yet even outside the oil patch, there were some major losers. Even as a footwear and apparel retailer, Boot Barn Holdings (BOOT -3.09%) has some ties to the energy complex. Meanwhile, International Game Technology (IGT -0.59%) could see collateral damage from the impacts of the COVID-19 outbreak on travel.

Shares of Boot Barn Holdings fell almost 30% Monday as investors assessed the possible second-order effects of the drop in oil prices on related businesses. Although Boot Barn doesn't have any direct exposure to oil and natural gas, some believe that it's uniquely positioned to get hurt by weaker economic conditions in energy-rich areas of the country. 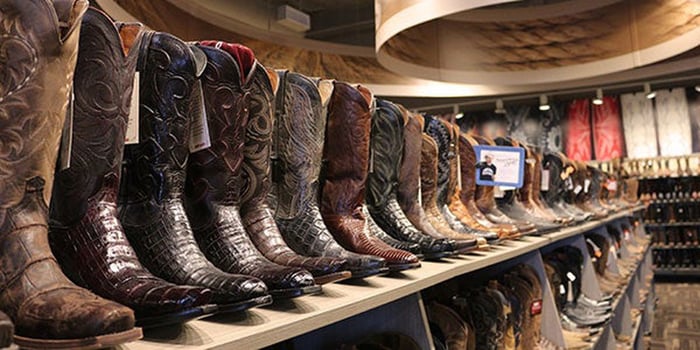 Analysts at J.P. Morgan reduced their rating on Boot Barn Holdings from overweight to neutral, cutting their price target on the stock to $35 per share. The analysts pointed out that Boot Barn has more than a third of its store base in markets that heavily rely on oil and gas for their economic prosperity, leaving the retailer vulnerable to a possible pullback from consumers there. At the same time, the workwear category has already shown signs of weakness, and with the potential for coronavirus-related work stoppages, Boot Barn could see pressure on that part of its business as well.

The big question is whether the crude oil price war between Russia and Saudi Arabia lasts very long. U.S. producers could potentially deal with a short-term price plunge, but if current signs are correct, the battle could go on for quite a while. If that happens, then Boot Barn could lose what's been a significant source of strength throughout much of its upward run over the past two and a half years.

Game over for IGT?

International Game Technology's stock lost a third of its value on Monday. The maker of slot machines and other gambling industry equipment took a massive hit as many of its casino resort company customers came under pressure themselves.

The drop in the casino industry has been largely a slow-motion decline, as investors have been slow to recognize the full potential impact of the COVID-19 outbreak. Over the weekend, pictures of nearly deserted airports and largely empty flights drove home the fact that travelers simply aren't leaving home. In response, large casino companies were generally down 9% to 13% on the day.

IGT has already been under pressure in its own right. In its fourth-quarter results announced last week, IGT said that gambling product sales reached record levels in 2019, but its outlook for 2020 failed to take into account any potential impact from coronavirus-related issues. Given that IGT has exposure to the hard-hit Italian market, shareholders seem reluctant to conclude that the company will emerge unscathed from the outbreak.

In the long run, casino gambling should recover from its recent drop. Until that happens, though, it'll be hard for companies like IGT that rely on casinos to regain their lost ground.