Researchers from Cedars-Sinai Medical Center estimate that there could have been more than 9,000 cases of COVID-19 in the U.S. as of March 1, a substantially higher figure than the 423 confirmed cases the Centers for Disease Control and Prevention reported Monday.

The study used air traffic data from Wuhan, China, to the U.S. prior to Jan. 23, when the Chinese government locked down that city, to estimate the number of cases of COVID-19 likely to have spread across the U.S. since then. Based on the coronavirus's transmission dynamics, the researchers calculated that there were between 1,043 and 9,484 cases in the U.S. on March 1.

The low end of that range was based on the assumption that preventative measures, such as quarantines and screening of international travelers at airports, had been able to reduce the transmissibility by as much as 25%. The high end assumed no intervention. The researchers noted that the wide difference between those estimates pointed up the need for governments to take concerted preventative measures. 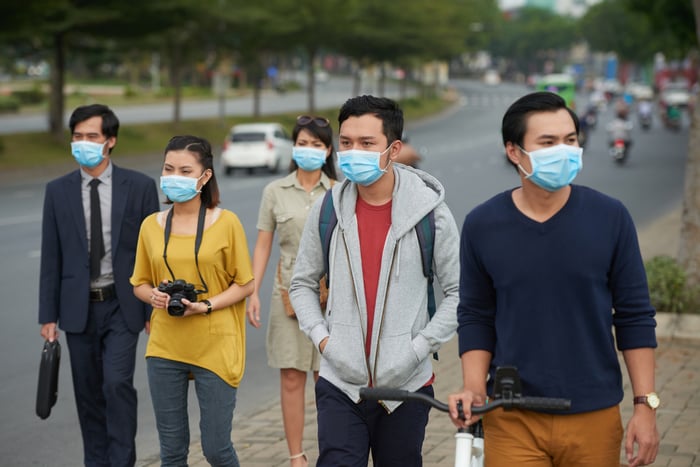 The researchers noted their estimate was "very conservative" since it doesn't consider the impact of cases that may have arrived from other parts of China or other affected countries, such as South Korea, Italy, or Iran. "This makes our current estimation likely to be an underestimation of the true number of infected individuals in the U.S.," the researchers wrote.

The researchers believe their numbers are substantially higher than the CDC's number of reported cases because a large percentage of people infected with the SARS-CoV-2 coronavirus experience only mild symptoms or remain entirely asymptomatic. The study's findings, they conclude, suggest "that the opportunity window to contain the epidemic of COVID-19 in its early stage is closing."

So far, there are no cures for COVID-19, but multiple drugmakers, including large ones such as Gilead Sciences (NASDAQ:GILD) and Johnson & Johnson (NYSE:JNJ), as well as smaller companies, such as Moderna (NASDAQ:MRNA) and Inovio Pharmaceuticals (NASDAQ:INO), are working on treatments and vaccines.