With air travel dropping sharply over coronavirus concerns, European carriers like Air France-KLM (AFLYY -8.78%) and Delta Air Lines' (DAL -4.13%) joint venture Virgin Atlantic were stuck between a rock and a hard place. So-called "slot rules" at European airports forced them to use allotted flight slots or potentially lose them. That resulted in costly "ghost flights:" empty or nearly empty flights being flown solely to satisfy the rules.

On Tuesday, in response to an outcry by airlines and environmental groups, European Commission president Ursula von der Leyen said regulators would temporarily suspend those rules. 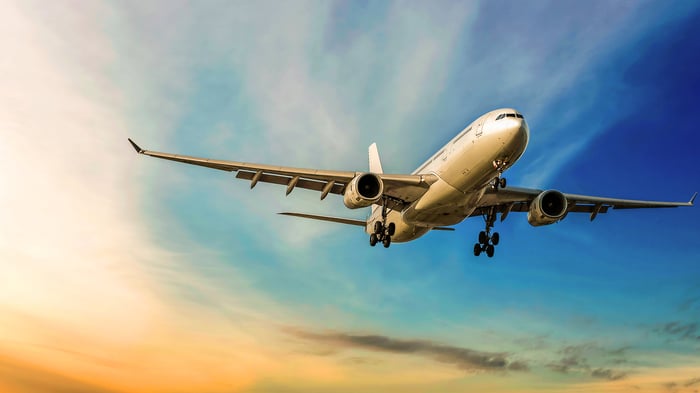 Major airlines breathed a sigh of relief as the EU said it would suspend slot rules. Image source: Getty Images.

Under the rules, airlines were required to use their flight slots at least 80% of the time or forfeit them. This encouraged competition by preventing airlines from hoarding valuable slots they weren't using.

Due to limited runway space at some of Europe's busiest airports, these slots are rare...and valuable. For example, London's busy Heathrow airport has only about 650 slot pairs (which include one arrival and one departure) per day. In 2016, KLM sold a single Heathrow slot pair to Oman Air for $75 million.

The Commission steps in

In recent days, the rules have caused major headaches for European carriers. Because passenger numbers have plummeted, carriers were being forced to operate "ghost flights" with few or no passengers, solely in order to maintain their 80% usage rate. This hurt the airline industry, since operating a single empty flight can cost millions of dollars. It also outraged environmental groups, which criticized the wasted fuel and needless carbon emissions caused by ghost flights.

Von der Leyen justified the decision as a "temporary measure," adding, "We see that the situation is deteriorating on a daily basis, and traffic is expected to decline further."