Please ensure Javascript is enabled for purposes of website accessibility
Log In Help Join The Motley Fool
Free Article Join Over 1 Million Premium Members And Get More In-Depth Stock Guidance and Research
By Adria Cimino - Mar 11, 2020 at 9:00AM

As the coronavirus outbreak sparks fears of drug shortages, Sanofi offers a solution.

Sanofi's (SNY -0.28%) decision to spin off its active pharmaceutical ingredient (API) manufacturing activities into a separate company might not have attracted much attention if the world wasn't in the midst of a coronavirus outbreak. Investors in the French drugmaker have been most focused on how new chief executive Paul Hudson will transform Sanofi from a company focused on diabetes and cardiovascular to one centered on higher growth areas like oncology.

Now, with the outbreak resulting in factory shutdowns in China, a major manufacturing hub of APIs, the idea of going elsewhere and ramping up production of the crucial ingredients that make drugs work may be music to investor's ears. 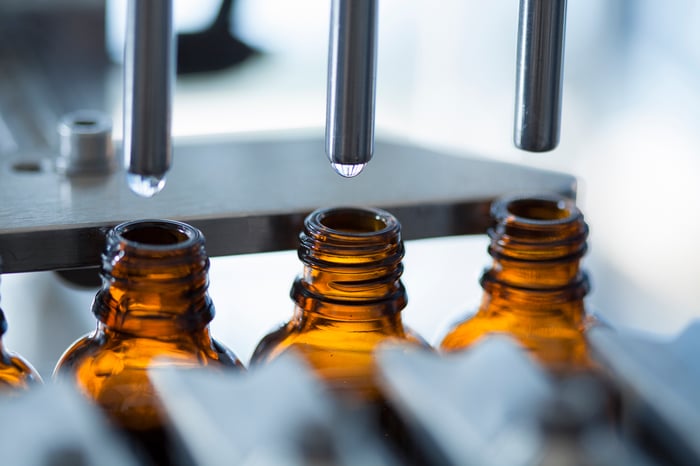 Risk of a shortage

About 80% of APIs imported to the U.S. come from China or India, according to a Mordor Intelligence report, citing trade statistics. China has been reeling from the coronavirus that has infected more than 80,000 people there since January and resulted in factory closures and quarantines that kept workers home.

The pharmaceutical industry is starting to feel the impact, according to a recent supply chain update by the U.S. Food and Drug Administration. A manufacturer reported a shortage of a drug, noting the coronavirus had affected a production site, the FDA said. The FDA also said it is monitoring 20 drugs that are entirely dependent on China for APIs or their final form, though so far there hasn't been a shortage. The regulatory agency has compiled a list of 150 prescription drugs -- including antibiotics and generics -- that are at risk of a shortage if the outbreak deepens, Axios reported.

The concern now is this reliance on China, in cases of a crisis like the current coronavirus outbreak, could result in global shortages of medication as well as a major hit to drugmakers' sales. Enter Sanofi, with the plan for its drug ingredients operation. Sanofi's API company will be headquartered in France and produce ingredients in Europe. Sanofi said one of the goals is to decrease the pharmaceutical industry's dependence on Asia.

The project is good news for drugmakers, offering them a new place to go for APIs. As for Sanofi itself, there's good news too. First, the spinoff goes along with the streamlining Hudson has done since he took the helm last year. For example, Hudson halted the company's diabetes and cardiovascular research programs as sales of medicines in these areas have been on the decline.

The new drug ingredients business will combine Sanofi's API commercial and development operations with six of its API production sites located in France, Germany, Italy, the UK, and Hungary. Sanofi will own a 30% stake in the new company so it will benefit from the $1.1 billion in sales expected by 2022, and Sanofi predicts the company will become the No. 2 player in its industry by that time. The plan includes an initial public offering of the shares on Euronext Paris, also by 2022.

By establishing the drug ingredient maker as a stand-alone operation, Sanofi gives it the opportunity to attract business from other drugmakers, and therefore, reach its potential in a growing market. The Mordor Intelligence research on the API market showed it's growing at a 6.1% compound annual growth rate and is expected to reach $237 billion in 2024. If the API operation were to remain under the Sanofi umbrella, it would be more difficult to sell services to competitors due to possible conflict of interest.

The spinoff news is positive for Sanofi because it reduces reliance on Asia, allows the company to control the production of its own drugs, and opens the door to higher revenue by serving other drugmakers. The timing of this news is perfect. Even if drugmakers make it through the coronavirus crisis supplies unscathed, with the outbreak fresh in their minds, they'll surely be on the lookout to move some of their API production out of Asia.

The outbreak will also be fresh in investors' minds for a while, so it's likely they will appreciate Sanofi's ability to assure its production rather than depend on manufacturers in Asia. That factor means less of a risk for revenue down the road.

Though Sanofi shares have declined 3.5% so far this year, they still are outperforming the S&P 500, which has dropped 8% in the same period as the coronavirus outbreak shook markets. For the long-term investor in pharmaceutical stocks, weakness in Sanofi shares offers an opportunity to bet on Hudson's leadership and the company's transformation. So far, it looks like the new CEO has the right prescription for growth.