Please ensure Javascript is enabled for purposes of website accessibility
Log In Help Join The Motley Fool
Free Article Join Over 1 Million Premium Members And Get More In-Depth Stock Guidance and Research
By Evan Niu, CFA - Mar 11, 2020 at 9:00AM

And then the coronavirus hit.

About a year ago, market researcher IDC estimated that that global market for wearable devices would jump to 198.5 million before proceeding to reach 279 million units by 2023. A few months later, IDC boosted its 2019 forecast to 222.9 million and its 2023 estimate to 302.3 million. IDC has just released its latest estimates for the wearables market for the fourth quarter and full-year 2019.

The market absolutely obliterated all of those initial forecasts. 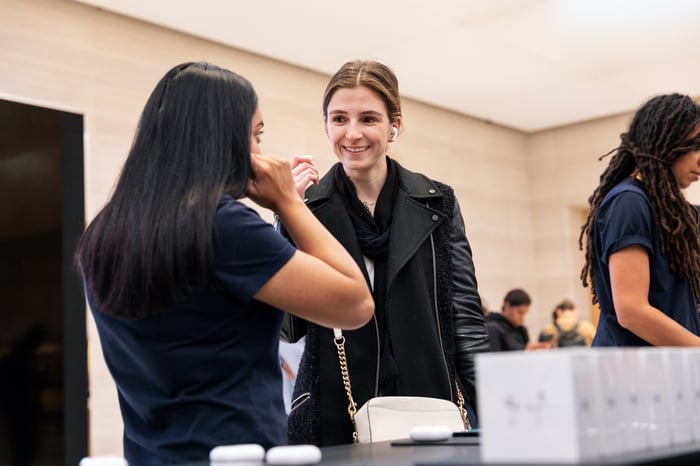 The market has quickly shifted to hearables

IDC says that total wearables volumes in the fourth quarter skyrocketed 82% to 118.9 million, driven by swift adoption of hearables. That brought full-year shipments to an incredible 336.7 million, up 89% from 2018. In other words, the wearables market shipped more devices in 2019 than IDC had initially predicted for 2023. The nascent market is simply evolving so rapidly that it's hard to accurately extrapolate future growth.

Apple leads the way with its expanding portfolio of wearable devices that now includes more hearable products like AirPods Pro, which were launched in October. Wearables are among Apple's fastest-growing businesses, with CEO Tim Cook saying the segment had reached the size of a Fortune 150 company, or about $20.8 billion in trailing-12-month (TTM) sales.

The Mac maker's Apple Watch volumes declined due to supply constraints as it struggled to keep up with demand; Cook acknowledged on the last earnings call that Apple Watch Series 3 and AirPods Pro suffered from shortages. Fortunately, growth in hearables more than compensated for that. Apple's total wearables volumes more than doubled to 43.4 million in the fourth quarter, grabbing over a third of the entire market.

Fitbit, which is in the process of being acquired by Alphabet subsidiary Google, has started to stabilize its shipments after two years of declines. The wearable tech company is selling more smartwatches, but basic trackers still represent the bulk of units. Fitbit missed both top- and bottom-line expectations in the fourth quarter, but investors remain singularly focused on whether Google's all-cash offer of $7.35 per share can secure regulatory approval.

"The market for wearables is also quickly becoming very top heavy as companies such as Apple and Samsung capture a greater share of the market," IDC research manager Jitesh Ubrani said in a statement. "While these giants put pressure on the rest of the market, there continues to be plenty of innovation and [differentiation] among the smaller brands and this long tail of the market will carry on for the [foreseeable] future."

The biggest shift that has occurred has been in earwear, which represented over half of total volumes in 2019. In absolute terms, there were three times more earwear units (170.5 million) than IDC had initially predicted (54.4 million). Smartwatches were mostly on target with forecasts. Despite its market share slipping modestly, Apple is overall maintaining its iron grip on that part of the market, accounting for around 40%.

IDC did not offer any commentary on how the coronavirus outbreak may be impacting the wearables market.