Please ensure Javascript is enabled for purposes of website accessibility
Log In Help Join The Motley Fool
Free Article Join Over 1 Million Premium Members And Get More In-Depth Stock Guidance and Research
By Evan Niu, CFA – Updated Apr 14, 2019 at 9:25AM

Smartwatches will lead the way, followed by earwear and wristbands.

Market researcher IDC recently tweaked its definition of wearable devices, which now includes wireless headphones that can activate smart assistants. Importantly, the change allows IDC to include one particularly popular product: Apple's (AAPL 0.66%) AirPods. After taking the adjustment into account, the researcher now estimates that worldwide wearable device shipments in 2019 will jump 15% to 198.5 million. Smartwatches, earwear, and wristbands are expected to drive unit volumes this year.

Here's what the estimates mean for companies competing in the wearables market. 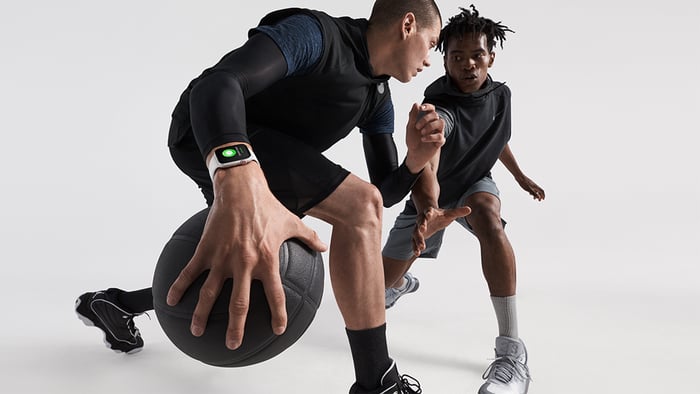 IDC breaks down its latest forecast by category instead of by vendor. Companies are now exploring connected clothing, but that category is expected to pale in comparison to smartwatches, earwear, and wristbands.

Smartwatches representing the bulk of wearables volume bodes well for Apple and Fitbit (FIT), currently the two leaders in the smartwatch space. Fitbit recently introduced an even more affordable version of its popular Versa smartwatch called the Versa Lite, which should help it cement its place as No. 2 behind Apple. Competition could soon start to chip away at Apple's position, though, with watchOS only expected to represent 28% of the smartwatch market by 2023, according to IDC's forecast.

In terms of the next-biggest category, earwear volumes could hit nearly 55 million this year as smart earbuds continue to grow in popularity. Samsung just released its Galaxy Buds, which support both Google Assistant and its own Bixby, to compete with AirPods. Adding biometric sensors -- which Apple is potentially doing with AirPods 2 based on patent filings -- will also help drive demand going forward, IDC believes. Fitbit's Flyer wireless headphones don't appear to qualify as wearables based on IDC's definition, since they lack any type of biometric sensors and don't provide access to virtual assistants.

Once upon a time, wristbands like basic fitness trackers represented the bulk of the wearables market, but consumers have been shifting toward more full-featured devices in recent years. The category is still popular in certain regions but isn't expected to grow much in the years ahead. IDC expects China's Xiaomi and Huawei to continue owning this segment of the market, although basic trackers still represented over half of Fitbit's revenue in 2018.