The recent market downturn, which can be attributed to the novel coronavirus crisis, tumbling oil prices, and overheated valuations, has spooked many investors. However, younger investors who are still decades away from retirement shouldn't sell all their stocks.

Instead, they should seek out high-growth companies with disruptive services and wide moats. These stocks could generate multibagger returns over the long term, and make you millions -- as long as you're willing to ride out the near-term volatility. 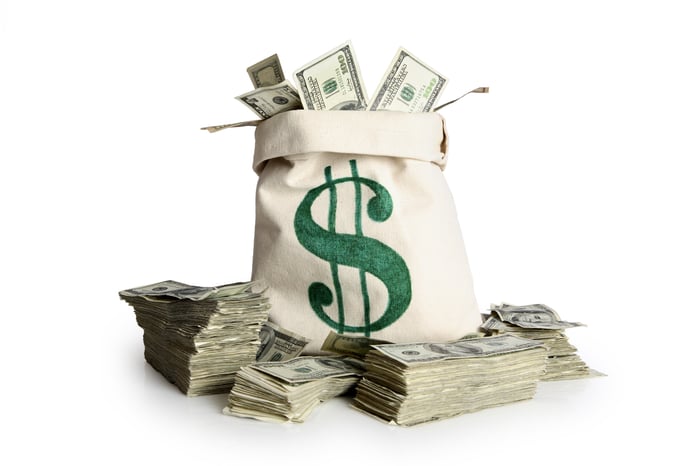 Twilio's cloud service handles text messages, voice calls, emails, videos, and other content for mobile apps. Developers add a few lines of code to their apps to outsource those services to Twilio, which is simpler and cheaper than building those features from scratch. Twilio enjoys a first mover's advantage in this space, and it has expanded by acquiring smaller companies like Beepsend, Ytica, SendGrid, and Teravoz.

Demand for Twilio's service -- which serves customers like Airbnb, Lyft, and Twitter -- is surging. Its total revenue rose 75% to $1.13 billion last year, as its "base" revenue (which only includes customers signed to 12-month minimum contracts) climbed 79% to $1.09 billion. Its dollar-based net expansion rate, which measures its growth per existing customer, also surged 136%.

However, the growth of mobile apps should fuel Twilio's growth for the foreseeable future, and economies of scale could eventually kick in and squeeze out a profit. The company also enjoys a major head start against challengers like Vonage's Nexmo, so competitive threats shouldn't throttle its growth.

Square disrupted the traditional point-of-sale (POS) system market with streamlined payment services that ran on smartphones and tablets. It leveraged that early mover's advantage and locked in merchants with additional services, including analytics, e-commerce storefronts, payroll management, financing options, and more. It also tethered consumers to its ecosystem with the Cash App, which provides peer-to-peer payments, cryptocurrency purchases, and free stock trades.

Square grew quickly by attracting smaller businesses with its simple payment platform, and its sticky ecosystem of add-on services boosts its revenue per customer. Square's total revenue, excluding its sale of Caviar to DoorDash, rose 45% to $4.57 billion last year. Its gross payment volume (GPV), the total value of all payments on its platform, rose 25% to a whopping $106.2 billion, with larger sellers accounting for 55% of that total.

Square isn't consistently profitable on a generally accepted accounting principles (GAAP) basis, but it expects its non-GAAP EPS -- which excludes stock-based compensation and other one-time charges -- to rise 13%-18% this year. It expects its revenue, excluding Caviar, to grow 33%.

Square's stock is pricey at nearly nine times this year's sales and nearly 80 times its earnings forecast, but the stickiness of its merchant ecosystem and the growth of Cash -- which surpassed PayPal's Venmo in U.S. downloads last year -- arguably justify that premium.

CyberArk is an Israeli cybersecurity company that focuses on tackling internal threats -- like corporate espionage and careless employees -- instead of countering external ones. If an internal breach is detected, its services lock down systems and pinpoint the threat. CyberArk now serves over 5,300 businesses worldwide, including more than 50% of companies in the Fortune 500 and 30% of the Global 2000.

CyberArk's revenue rose 26% annually to $433.9 million last year. It posted double-digit growth across all geographies for the year, with the Asia-Pacific Japan region leading the way with 54% growth.

Unlike Twilio and Square, CyberArk is consistently profitable by both GAAP and non-GAAP measures, thanks to its tight cost controls and conservative stock-based compensation expenses. Its GAAP net income rose 34% to $63.1 million in 2019, as its non-GAAP net income grew 41% to $107.9 million.

CyberArk expects its revenue to rise 18%-20% this year, but for its non-GAAP EPS to dip 14%-18% on higher investments. That temporary decline prevented the bulls from stampeding into the stock, but it still seems reasonably valued at less than 40 times this year's earnings. CyberArk could still have plenty of room to run, since data breaches are rising annually, and it could still be a lucrative takeover target for bigger tech companies like Cisco.