Please ensure Javascript is enabled for purposes of website accessibility
Log In Help Join The Motley Fool
Free Article Join Over 1 Million Premium Members And Get More In-Depth Stock Guidance and Research
By Justin Cardwell - Mar 11, 2020 at 8:15AM

This 134-year-old beverage company is maneuvering to maintain growth while providing an impressive dividend yield.

Coca-Cola (KO -1.71%) is paying a forward dividend yield of 2.78%, which is 2.01 percentage points above the United States 10-year Treasury yield at the time of this writing. As Coca-Cola's share price continues to outperform the S&P 500, income investors will need to ensure that the growth and sustainability of Coca-Cola's dividend mean it's a better company to own over the competition in the long term.

Let's look at the long-term outlook on Coca-Cola, determining if the share price increase of 29% over the last year is appropriate given the changes within the company. 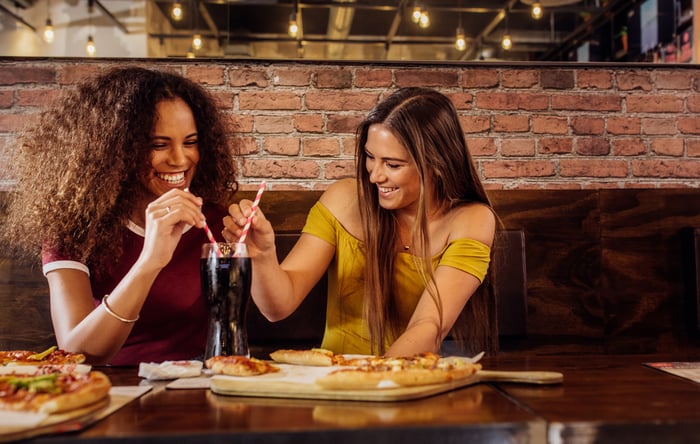 Coca-Cola's move toward smaller packaging and several acquisitions are showing success for the company. The operating margin has improved significantly, up from 23.1% in 2015 to 28.5% in 2019 -- a 5.4 percentage point improvement. Concerning top-line growth, Coca-Cola's sparkling segment grew 6% in 2019. However, total revenues have fallen from $44.3 billion in 2015 to $37.3 billion in 2019 as the company closes bottling facilities, divests underperforming brands, and restructures operations -- led by the decline in demand around sugar-based beverages.

Coca-Cola has launched hundreds of products over the last few years, with the majority of the products consisting of no-sugar or low-sugar, and the remaining concentration around waters, juices, and teas. The focus on a well-diversified portfolio of high-profit margin products is clearly working for Coca-Cola's profitability. However, will this continue to allow the company to increase the dividend?

Looking into 2020, Coca-Cola expects to deliver 5% organic revenue growth during the fiscal year and 8% growth in operating income -- expecting more divestitures and acquisitions during 2020. Coca-Cola's earnings per share is expected to increase by 7% during the year, with a projection of $2.25 per share.

Coca-Cola is currently paying a higher forward dividend yield of 2.89% over Pepsi's 2.77%. However, Pepsi has maintained a five-year revenue growth of 0.14%, while Coca-Cola's revenue has decreased by 4.12%.

Coca-Cola's forward price to earnings of 25.21 and the price to sales of 6.51 puts the company at a heavier valuation in comparison to Pepsi's forward price to earnings of 23.42 and a price to sales of 2.88. Investors purchasing a higher dividend yield with a heavy share price valuation demand consistent growth from Coca-Cola, which the company can deliver if it continues to produce results as in 2019.

A compelling company at a heavy valuation

Coca-Cola is among very few companies that have paid a growing dividend for 57 years, and that growth doesn't look to discontinue in the long term. Coca-Cola's share price is currently trading above Pepsi's valuation. However, there are several factors that make Coca-Cola a compelling company to own. As the company focuses on growing segments while benefiting from the global distribution network, there is a large potential for Coca-Cola to continue growing, benefiting shareholders with increased dividends and share repurchases while giving shareholders confidence that its dividend is sustainable for quite some time.