Coca-Cola has been able to grow revenue organically and inorganically at an impressive pace. Earnings are growing even faster than revenue.

Consumers around the world are becoming more health conscious. Recent studies show that people are drinking less sugary drinks in favor of healthier options, and some governments have even started taxing sugary drinks in an effort to nudge consumer behavior.

Last year, Coca-Cola (KO 0.82%) generated 69% of its worldwide unit volume from sparkling soft drinks. Most of this volume is from the signature Coca-Cola brand soda. Despite the difficult market environment for soft drinks, the company has been able to show organic revenue growth and even faster profit growth. The key to Coca-Cola's recent success can be attributed to pricing power, margin-enhancing restructuring efforts, and expanding into attractive new beverage categories. 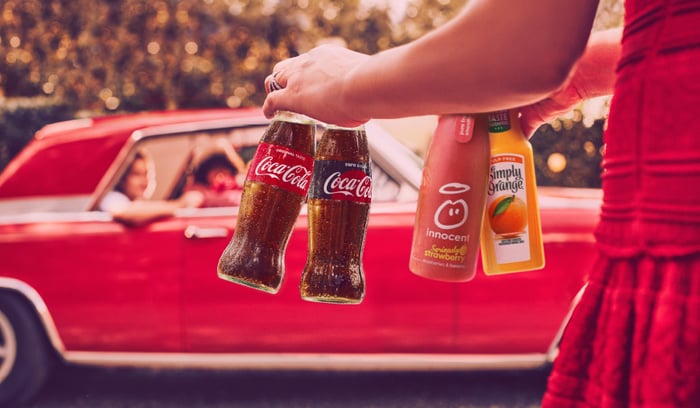 Coca-Cola has a stated goal of achieving long-term organic sales growth of 4% to 6%. The table below shows that the company has been within striking distance of this goal but is a bit shy.

Unit volume and price/mix drive Coca-Cola's revenue trends. Unit volume for Coca-Cola refers to how many cases of bottled beverages it sells. Price/mix refers to price per unit, which can vary depending on the type of beverage or packaging. The standard way of raising prices involves simply adding a few cents to the unit price; however, price and mix can take several forms. Certain beverage categories, organic teas for example, generally have higher unit prices. So if Coca-Cola sells relatively more premium beverages, it is said to benefit from its sales mix shifting to higher priced units. Another way Coca-Cola has "raised prices" is by packaging classic Coke in smaller cans but keeping the prices the same.

Sales unit volume has been flat globally despite falling soft drink consumption in the US. Coca-Cola generates more than half of its revenue outside of the United States, where soft drink consumption is trending upward as a result of rising disposable incomes in many developing economies. In developed economies, Coca-Cola has been able to offset volume declines in sugary drinks with healthier options like tea and water.

Price/mix has been the leading driver of organic growth. Coca-Cola's brand strength is legendary, allowing the company to increase prices without losing share in its soft drinks. Outside of soda, the company has focused on niche categories that lend themselves to "premiumization". Tea, water, and juice are examples of beverage categories where consumers are willing to spend more money for valued-added attributes such as natural ingredients or fewer calories.

Revenue growth driven by price increases leads to profits growing faster than sales, all things being equal. This operating leverage will help the company maintain an attractive level of earnings growth in coming years.

In addition to driving revenue growth, Coca-Cola has cut costs and restructured to improve margins. In 2014, the company launched a massive program to reduce headcount by 1% and improve earnings $3 billion annually by 2019. Based on a steady rise in gross and operating margins over the past few years, these measures have been successful. 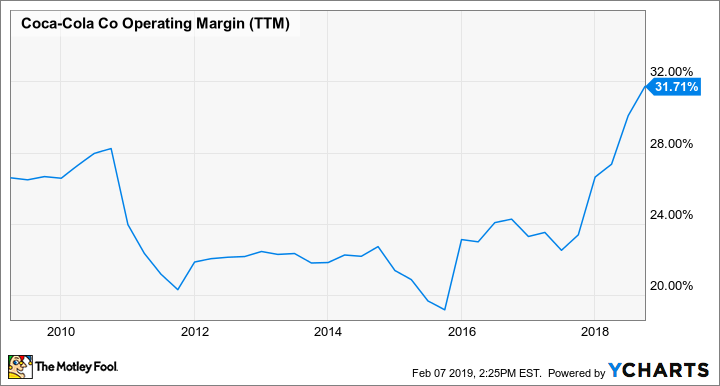 The company has also restructured itself by selling its bottling operations. In recent years, Coca-Cola has sold its bottling businesses in the U.S., Europe, China, and Africa. Bottling is a capital intensive and low-margin business. Separating bottling from marketing has made the company leaner and more focused, giving the business a higher-margin, asset-light operation that generates a higher return on equity.

Coca-Cola now has its highest level of operating margins in years with additional improvement expected in 2019. The company's focus on costs is a boon to shareholders who will be rewarded with greater cash flow for dividends, repurchases, and acquisitions.

Finally, Coca-Cola has been diversifying itself away from sugary drinks with acquisitions into new categories. M&A is nothing new for the company, but the pace of M&A has picked-up in recent years.

Coke's largest and most recent deal was the $5 billion acquisition of Costa Coffee. This transaction gives Coke meaningful exposure to the global coffee market for the first time. Costa generates most of its sales through a bottled coffee drink sold in retail stores and vending machines in the UK. Costa also sells coffee beans and operates a chain of coffee shops consisting of nearly 4,000 stores in 31 countries. The company can significantly expand Costa's bottled coffee drink through its distribution network and experiment with its physical store footprint. It will be interesting to watch what the company does with this new brand in coming years.

Coca-Cola has made many smaller acquisitions as well, entering categories such as Kombucha and natural fruit juices. The company even hinted it was exploring CBD-based drinks. One particularly interesting deal was Coke's minority investment in sports drink BODYARMOR, a Kobe Bryant-backed company that more than doubled its revenue and signed a deal to become an official sponsor of the NCAA in 2018.

Acquisitions, both small and large, allow Coca-Cola to enter new markets and diversify itself away from unhealthy products. As consumer tastes shift, Coca-Cola's multi-pronged brand strategy will help keep the company relevant.

Coca-Cola is thriving despite the challenging market for soft drink sales. The company has several powerful business levers in the form of pricing power, cost controls, and astute M&A. These business levers have kept the company growing and its product relevant. Furthermore, Coke's management team has shown their ability to steer the ship when the tides are changing. Investors can expect the company to continue delivering strong financial results for years to come.