Please ensure Javascript is enabled for purposes of website accessibility
Log In Help Join The Motley Fool
Free Article Join Over 1 Million Premium Members And Get More In-Depth Stock Guidance and Research
By Rich Duprey - Mar 11, 2020 at 11:25AM

It looks like the tech giant wants to break into a whole new market.

It looks like Apple (AAPL 1.62%) is ready to take on Sonos (SONO -0.67%) and Bose, as a recently awarded patent shows the tech giant may be looking to develop a smart-home theater system.

With an existing foundation of devices including the Apple 4K TV and the HomePod, a wireless and wired speaker hub for a home theater system could be the key ingredient Apple needs to compete effectively in the connected living room. 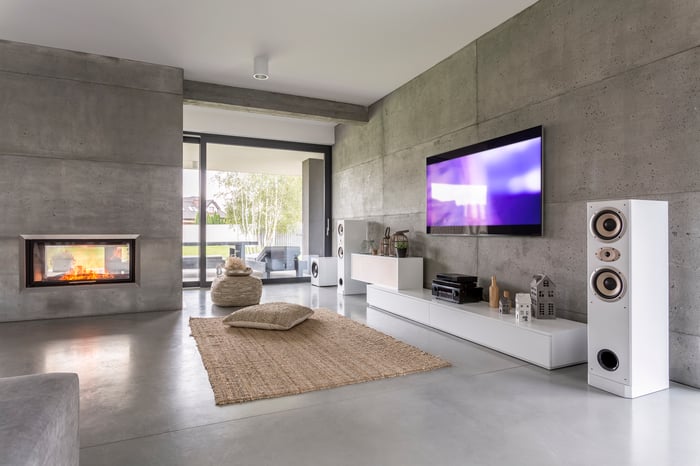 The future of sound

The website Patently Apple was the first to discover the patent awarded to Apple. It shared images of how the tech giant could trick out a home configured with multiple speakers and a separate subwoofer that could communicate wirelessly by transmitting "a plurality of channels to a center channel loudspeaker. "

Although Apple patents lots of ideas every year -- and they don't all come to fruition -- this patent was originally filed in 2004, and acquired from KSC Industries. That suggests Apple may be serious about developing the home theater system, even if it would undoubtedly look very different from what the patent shows. Patently Apple notes Apple now has several home theater system patents to its credit. 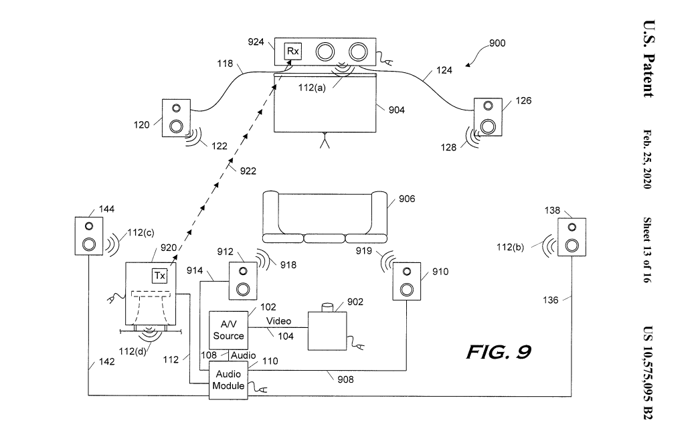 Because it misjudged the smart-speaker market and had to cut the price of its HomePod, Apple may need to make changes to the device to have it become competitive, such as allowing third-party music services to run directly from the HomePod. Because both Sonos and Bose already have smart-home theater systems similar to the one described in the patent, if Apple expands the ecosystem and makes it more inclusive, particularly following the launch of Apple TV+, that further shows this may be a direction it actually wants to take.

A complete home theater system would help Apple build out the HomePod as an important smart speaker that audiophiles should include in their connected living.

Apple hasn't been able to gain much traction, only slightly improving sales last year due to the deep discounting that was occurring on the devices. Although the company doesn't share unit information, by using channel checks and research, Strategy Analytics says Apple shipped 2.6 million units in the fourth quarter of 2019, a 65% increase over the year before. However, it only marginally added to its market share, raising it from 4.1% in 2018 to 4.7% last year.

Sonos, on the other hand, continues to be one of the premier players in the high-end smart-speaker market. The Sonos One and Sonos Move, which allow for wireless Wi-Fi and Bluetooth-enabled use indoors and outside of the home, helped drive Sonos sales higher in the first quarter, along with system components like the Amp, Port, and Boost.

Still a lot to prove

If Apple really is ready to take on Sonos in the home theater market, it will need to up its game. It can no longer count on its legion of fans to automatically buy its products, as the HomePod proved.

A new home theater system from Apple would be an intriguing development, but because Sonos and Bose have their own loyal fan bases and are seen as the systems of choice for audiophiles, the tech stock would need to prove integrating a new streaming hub into the HomePod and Apple 4K TV milieu would be worth making the switch.