Signs point to a potential turnaround in the company's fortunes.

Could United Natural Foods (UNFI 0.91%) finally be rounding a corner? The beleaguered wholesale grocery distributor issued its fiscal second-quarter earnings results on Wednesday, and though the report displayed its share of blemishes, some encouraging signs are emerging as the company attempts to dispense with a lingering drag from its October 2018 acquisition of competitor SUPERVALU.

Below, let's briefly review the quarter, and then discuss the positive signals in the data. Note that all comparable numbers that follow refer to the prior-year quarter. 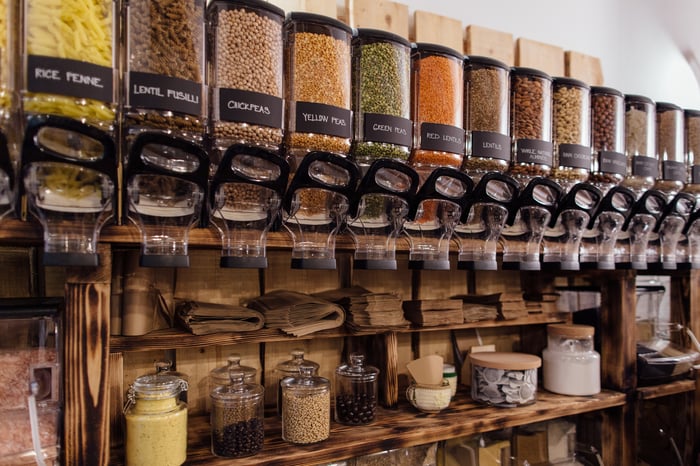 United Natural Foods financed its acquisition of SUPERVALU with substantial debt, taking its long-term borrowings from roughly $150 million before the transaction to $2.9 billion after the deal closed in 2018. Last quarter, the company increased long-term debt by another $232 million to bulk up on inventory in advance of the holiday season. Management indicated at the time that the new borrowings would reverse after the first quarter.

This indicates that the company indeed enjoyed a strong calendar year-end -- it covered the cash drain of the first quarter while also absorbing the cash effects of the customer bankruptcy expenses in the second quarter. Rising operating cash flow would allow the company to continue to trim its debt service -- a key stake in the ground for a prolonged turnaround, and a goal that management has affirmed its commitment to previously.

In another small sign that we may be seeing an incipient shift in the organization's operations, this quarter's gross margin hints at profit stabilization. After acquiring SUPERVALU, the wholesale grocer's gross margin has drifted down nearly every quarter from its perch of 15% pre-acquisition. The current period's year-over-year growth, even by a meager 14 basis points, may represent a floor from which improvement is possible. The company appears to have put some of its initial integration issues related to SUPERVALU's distribution network behind it; with disciplined execution, an improvement of 100 to 200 basis points in gross margin should be within reach.

United Natural Foods, a prototypical consumer staples investment, currently trades at a price-to-book value ratio of just 0.32. For value investors, this is a sign that if the grocer can make incremental progress in boosting margins and cash flow, it may emerge as an attractive long-term purchase. I'd wait until at least the fiscal third quarter for confirmation of health in the data points discussed above, but United Natural Foods, despite its struggles to digest SUPERVALU, may end up as a sensible bargain purchase for risk-tolerant investors this year.