Please ensure Javascript is enabled for purposes of website accessibility
Log In Help Join The Motley Fool
Free Article Join Over 1 Million Premium Members And Get More In-Depth Stock Guidance and Research
By Lee Samaha - Mar 12, 2020 at 10:45AM

The near-term outlook is deteriorating rapidly for aerospace stocks as the COVID-19 coronavirus outbreak widens in scope.

Unless you've been living in hiding for the last month, you already know that the COVID-19 coronavirus outbreak is a genuine threat to the global economy and corporate earnings -- notably in the aerospace sector. Indeed, the International Air Transport Association (IATA) projections for 2020 are now building in scenarios that suggest a significant impact on airline profitability and, in turn, aerospace stocks in general. Let's take a closer look. 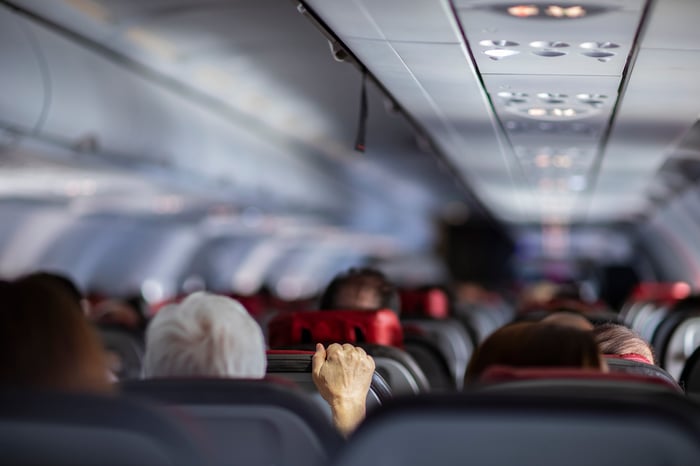 Why passenger traffic is so important

It's a simple fact that airline profitability is the key to the commercial aerospace industry. If passenger traffic and load factors are increasing, airlines are likely to make more profits. In turn, more profitability usually translates into aircraft orders for Boeing (BA 5.64%) and Airbus, and that means more orders for original equipment manufacturers like General Electric (GE 4.70%) and United Technologies (RTX 2.66%). Moreover, if more passengers are traveling, there will be an increased demand for aerospace aftermarket parts.

Of course, the reverse is also true, and the last thing anyone in the aerospace industry wants to see is declining passenger traffic -- usually measured in terms of revenue passenger kilometers (RPK). A look at the chart below shows that it's been a great decade for the commercial aerospace industry, with a never-before-seen run of profitability driven by passenger growth. For reference, I've included the original IATA forecast for passenger growth and airline profitability. More on that in a moment. 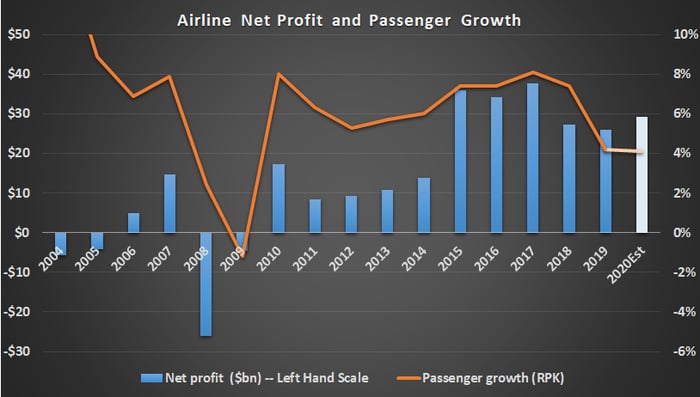 As you can see above, the initial expectations for 2020 were for another year of solid growth. Unfortunately, the novel coronavirus has put paid to that idea, and if anything, the outlook is getting worse.

For example, in late February, the IATA modeled the impact of the novel coronavirus on passenger traffic and the impact on airline profitability, assuming a so-called "SARS-shaped" scenario impact that would limit the impact mainly to the Asia-Pacific region. The SARS coronavirus hit in 2003, but its impact proved short-lived.

For reference, here's the forecast for passenger traffic given by the IATA on Feb. 20 -- a forecast that led to an estimate for a $29.3 billion impact to worldwide airline revenue in 2020, with $27.8 billion of it falling on Asia-Pacific airlines.

Unfortunately, the spread of the outbreak has widened, and it has now become a global issue, so it's no longer feasible to expect the impact to be limited to Asia. As an example of this fact, consider the following snapshot of data from the World Health Organization. The chart shows the new confirmed cases reported on the last day of February to the day of writing this article. As you can see in the table below (as reported on March 10th, 2020), there has been a huge swing in case growth in European countries like Italy and, to a lesser extent, Germany, France, and Spain. 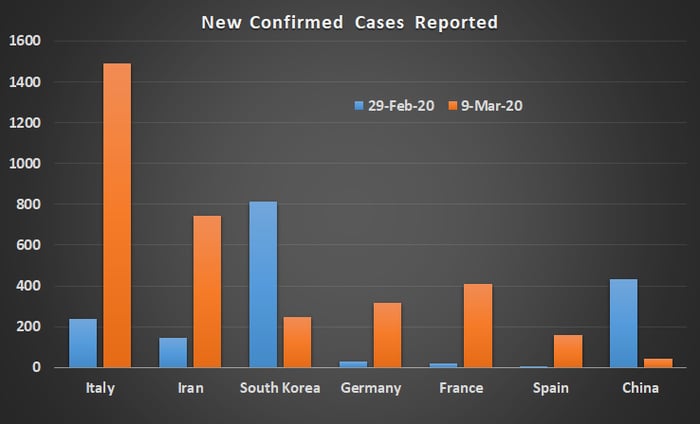 Based on the current data, it looks as if we are heading toward the extensive-spread scenario. For example, the IATA's limited-spread scenario looked at countries that had 100 or more cases on March 2, and that included eight countries. Fast-forward to March 9, just one week later, and the number of countries with 100 or more cases is now 17 and includes the United States. In that period, Germany and France have gone from barely 100 cases each to more than 1,000 each.

Whichever way you look at it, the airline industry is going to take a hit in 2020, and that's bad news for all those suppliers like GE and United Technologies that have been profiting from a booming commercial aerospace market.

What are investors to make of it?

While it's clear that aerospace stocks' earnings estimates for 2020 are under threat and will probably have to be taken down, it doesn't mean the industry is out for the count. On the contrary, new case growth appears to be on a downward trend in some of the earliest-affected countries like China, South Korea, and Japan -- a sign that the outbreak is starting to be controlled on a local basis. If this occurs in the rest of the world in the coming weeks, aerospace stocks are likely to bounce back strongly.

There is a case for buying into the industry right now in anticipation of a recovery, but anyone buying in must appreciate that the current earnings estimates for 2020 are likely to be downgraded. In other words, don't buy in without expecting some volatility along the way.