It was a brutal, yet predictable, start of trading Thursday morning as broader markets plunged 7%, which triggered a halt in trading. The night before, it was announced that NCAA college basketball tournaments would be played without crowds, the NBA suspended its season as it reported at least one player had tested positive for COVID-19, and President Donald Trump declared restrictions on travelers coming to the U.S. from Europe.

It's clear that the COVID-19 pandemic has the potential to slow global economic activity, but it's also uncertain how long the impact will last or how severe it will be. It's also clear that the restaurants and entertainment will be heavily affected as public health officials warn consumers to avoid public gatherings and encourage "social distancing." As you can see in the graph below, the three previously mentioned stocks, and the broader restaurant industry, have been in near free fall over the past couple of weeks. 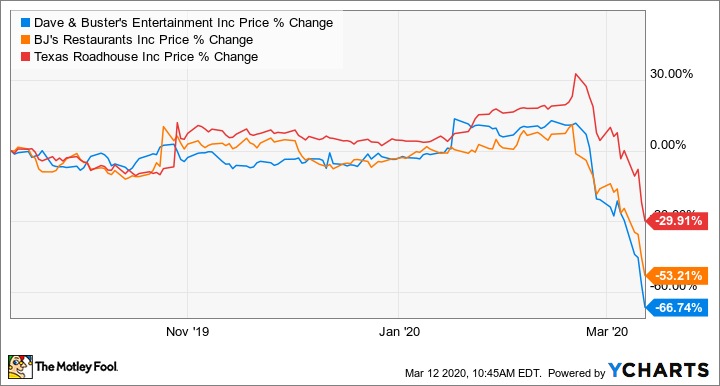 There's an adage that says markets take the escalator up and the elevator down, and that rings true for most corrections. It's easy to be fearful and panic as markets plunge, creating a vicious cycle. And while it's difficult to sit idly as markets decline, investors would be wise to take a deep breath and remember that whether it was SARS, MERS, swine flu, Sept. 11, or the financial crisis in 2008, the markets have always rebounded in the long term. In fact, at roughly the same time the NBA was suspending its season in the U.S., China was announcing that the peak of the epidemic has passed for China, that it was allowing citizens to reopen businesses, and that the government is softening containment measures.

Investors who keep a long-term investing horizon have a fantastic opportunity to dust off their bull thesis and determine whether the COVID-19 outbreak will have an impact on their companies 10 years from now. It's difficult to imagine COVID-19 still negatively affecting stocks, and this pullback could give savvy investors a chance to increase their position in solid companies.

With regard to the three aforementioned companies, it's understandable that Dave & Buster's has been the hardest hit. Not only is D&B's a place for gathering, the locations feature arcades where lots of people play video games on the same machines -- a risky scenario during this pandemic. Dave & Buster's was already trying to reignite its business before COVID-19 added uncertainty and potential traffic declines to the equation. D&B surged after going public in 2014 but plateaued around 2017 and has struggled to reignite comparable-store sales since then. D&B could look like a bargain at these levels, but it does have challenges outside the outbreak. 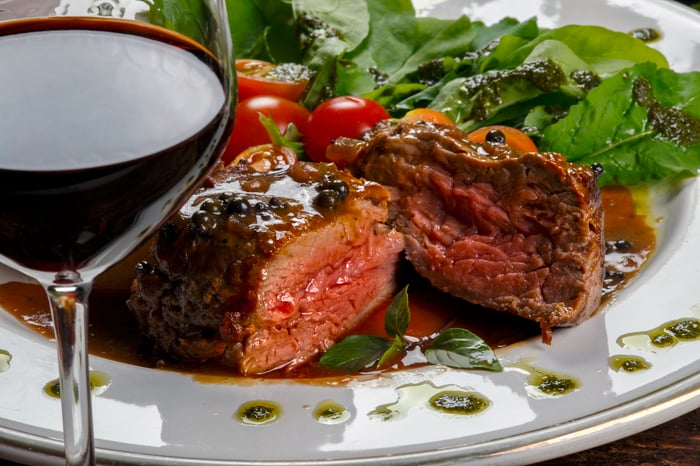 BJ's Restaurants just came off a mixed fourth-quarter result that missed analysts' estimates on the top line as growth was a little slower, but topped analysts' estimates on the bottom line, driven by productivity improvements. Full-year comparable sales checked in a modest 0.4% over the prior year, but the company is relaunching its catering menu, adding $6 menu items for take-home orders and a new tri-tip sirloin, and improving the guest experience, among other initiatives. COVID-19 will dent those sales initiatives in the near term, but long-term potential seems unchanged.

Texas Roadhouse looks like a tempting buy as the broader markets weigh on stocks: It just delivered an impressive 40th consecutive quarter of comparable-restaurant sales growth, and it did so in a highly competitive industry. Its recipe is simple: quality service, competitive prices, and a solid menu that keeps customers returning. Its recent fourth quarter boasted a 19.7% jump in revenue and a 45% increase in earnings per share thanks to increasing margins, and management even bumped its quarterly dividend 20% higher.

Ultimately, history has shown investors are better off not panicking when markets tank. Eventually the economy and markets will almost assuredly rebound from COVID-19. Some restaurant stocks face challenges outside of the outbreak fear, but savvy investors can take this opportunity to scoop up shares of solid restaurant stocks on the cheap.