Investors in brewpub chain BJ's Restaurants (NASDAQ:BJRI) aren't buzzing these days. The stock peaked in Sept. 2018, already having doubled that year. But since then, shares have tumbled 50%, severely underperforming the S&P 500 during that time. 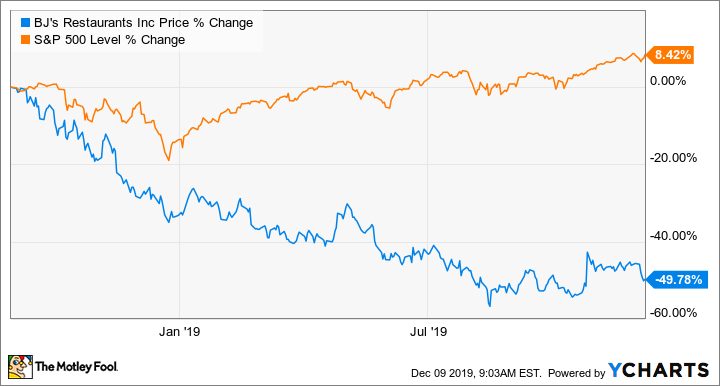 In BJ's third-quarter earnings call, management shared a three-pronged capital allocation plan to benefit shareholders. It will use "strong" cash flow from operations to buy back shares, open new restaurants, and invest back in the business.

What is "strong" cash flow? 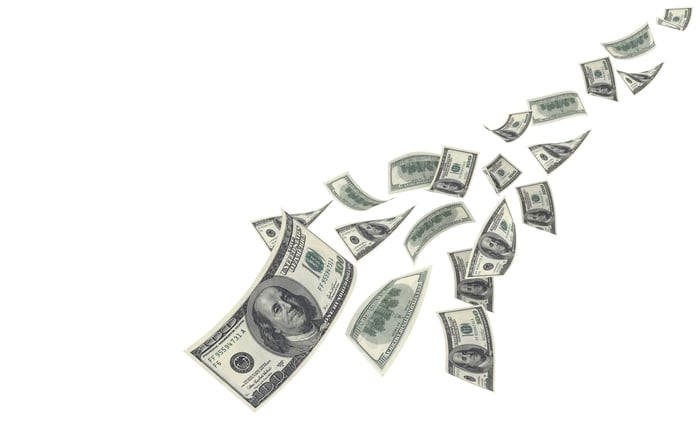 Two other casual-dining restaurant chains with high average unit volumes (AUVs, or annual average sales per location) like BJ's are The Cheesecake Factory and Texas Roadhouse. So far in 2019, The Cheesecake Factory has a 7% operating cash flow margin, while Texas Roadhouse has a 12% margin. So in light of these comparable companies, it would be a stretch to call BJ's cash flow strong -- "average" is probably a better word.

Room for expansion and improvement

BJ's currently has 208 locations, but the chain has long aspired to operate more than 425 long term. For 2020, it will continue toward that goal by opening 8 to 10 new locations for 4% to 5% unit growth. Should unit growth continue at this modest pace, it will take more than 15 years to reach its long-term goal.

Growth investors probably aren't keen on that, but it does make sense for BJ's to be disciplined with its unit growth. While its AUVs are among the best in the business at $5.5 million, comparable-restaurant sales were slightly negative in the third quarter, and rising costs are affecting margins. In particular, labor is getting more expensive as minimum wages creep upward. It can be detrimental for a restaurant chain to grow too fast with concerns like these.

As BJ's uses cash flow to grow moderately, it will also use cash flow to address this issue of rising costs. Specifically, the company is redesigning its kitchens to be more efficient, faster, and just improved overall. But rolling them out has not only cost the company in new equipment, it's also had a price in extra labor to train employees.

Much of the kitchen rollout happened in the second quarter. But restaurant staff were still learning the system in the third quarter, which increased labor costs. Going into the fourth quarter and beyond, the redesigned kitchens should begin delivering cost benefits. Even so, management was clear that the kitchen improvements won't be enough to completely offset wage inflation.

Not much left on the buyback plan

In Mar. 2019, BJ's board decided to increase its $400 million stock buyback plan by $100 million. But right now, there's only about $50 million left on that $500 million authorization. Considering the company repurchased $41 million of stock in the latest quarter, this buyback is winding down. If the company is serious about using cash flow to repurchase shares, look for it to either expand its current plan or issue a new authorization in the next quarter or two.

In theory, stock buybacks increase earnings per share, since there are fewer shares to go around. But that hasn't really been the case for BJ's. The buybacks are essentially offsetting downward pressure on earnings right now, holding it flat. 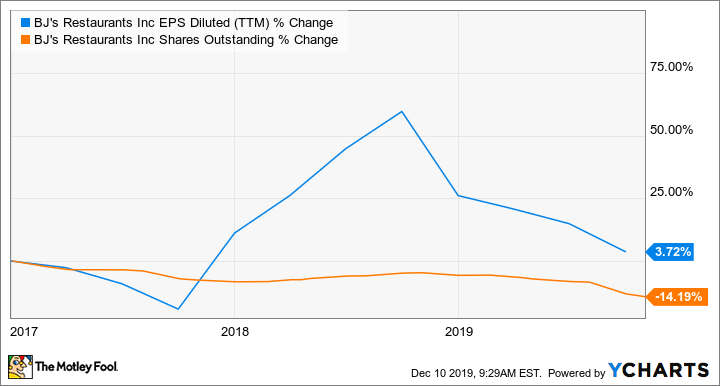 As far as operating a restaurant chain goes, give BJ's some credit. These are hard times to operate a casual-dining chain, and the company hasn't been knocked backwards. But as far as an investment goes, growth prospects are modest at best. Cash flow is average, and unit growth is moderate, while kitchen upgrades and share buybacks are only offsetting the drags on profitability. Although investors could find worse companies in the restaurant industry, I believe there are better opportunities to beat the market.