Consumers are buying basic goods and spending more time at home, and that’s why these shares will benefit from the current crisis.

Stocks across industries are sinking, and a new bear market began this week. But some of the shares that are taking a hit today may not show many battle scars from the coronavirus outbreak when earnings season rolls around. The coronavirus outbreak started in China in January and has since spread globally, turning into a pandemic and resulting in more than 137,000 cases.

With the outbreak affecting the world, the impact on companies has gone beyond just those that have business in China or rely on tourism. Though most every company and sector will feel the pressure, Amazon.com (AMZN 3.58%), Campbell Soup Co. (CPB 2.19%), and Netflix (NFLX 5.03%) may weather the coronavirus storm better than others -- and might even see a boost to revenue. 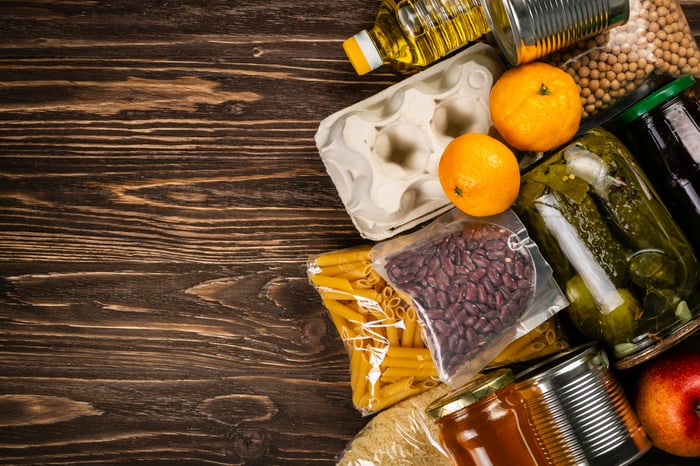 The retail giant can hardly keep up with demand as shoppers load up on necessities. For at least a week, a message on Amazon's website has said higher-than-usual demand is weighing on delivery times and supply. Shoppers, seeking to avoid possible exposure to coronavirus, are avoiding stores and instead buying online. While the frenzy may create some strain on Amazon's processing, it also means it will bring in more orders and revenue. Prior to the crisis, Amazon's first-quarter net sales growth forecast already was bright, with expectations for a gain of 16% to 22%. Will this flood of orders lift sales to the high end of the forecast or beyond?

It's possible, but even without an extra boost, Amazon's growth prospects make it a stock to buy. Amazon's shares are down 9% this year, leaving room for 43% upside from here, according to Wall Street. On March 12, the price-to-earnings ratio dropped to 72.86, the lowest since September.

The Department of Homeland Security recommends stocking up on a two-week supply of food and water in preparation for a pandemic. That advice may drive consumers to buy Campbell's soups, or the company's Prego sauces, SpaghettiOs, and snacks like Cape Cod chips. In an interview with CNBC last week, Campbell's chief executive officer said the company was lifting production as a result of the outbreak and said demand from retailers rose over the weekend. Consumer stockpiling bodes well for Campbell's sales in the current quarter as people tend to stock up on foods that can be stored over time and easily prepared, such as canned goods.

Though Campbell's in December said the sale of its European chips business would weigh on sales for the 2020 full year, in the fiscal second-quarter earnings report earlier this month Campbell's raised its adjusted earnings-per-share guidance for the year to the range of $2.55 to $2.60 from the range of $2.50 to $2.55. Campbell's shares so far have fallen this week, falling about 5% compared to the S&P 500's 9% loss. Campbell's has increased revenue growth annually for the past two years and surpassed analyst earnings estimates for the past four quarters. That track record makes me optimistic about future earnings and share gains for this food stock.

Recent optimism that Netflix subscribers will grow in leaps and bounds due to the coronavirus outbreak may be exaggerated. Though Netflix continues to gain subscribers, with 20% year-over-year growth in the fourth quarter, it would be unrealistic to expect a surge during the outbreak. According to Statista, 60% of adults in the U.S. had a Netflix subscription in 2018. That means Netflix already has a large share of the market. More time spent watching Netflix won't translate into more revenue for the streaming service either since monthly subscriptions include unlimited access to shows. So why is Netflix a buy during the current crisis?

It's primarily because revenue and earnings won't be massively hurt due to the outbreak. It's unlikely the coronavirus pandemic will lead to viewers dropping subscriptions or to a large disruption to operations. And we may see a small uptick in subscribers directly linked to the health crisis. Netflix has 167 million paying subscribers and expects that number to increase by almost 17% in the current quarter. Though competitors such as Disney+ and Apple TV+, which both launched in the fourth quarter, may weigh on subscriber gains, Netflix remains well ahead of rivals. Netflix shares have declined 2.6% since the start of the year, but some analysts still predict upside of at least 16%. Any share weakness is an opportunity to buy shares of this market leader.