When everyone else is trying to fend off Amazon, this off-price retailer is choosing just to ignore it.

It's one of those rules virtually engraved in stone: Retailers need an e-commerce presence if they want to survive the onslaught of Amazon.com.

Yet Burlington Stores (BURL -4.73%) has decided it can perform better if it eliminates its online store. The off-price retailer says that in its business, "bricks and mortar stores have a significant competitive and economic advantage over e-commerce." It's not wrong. 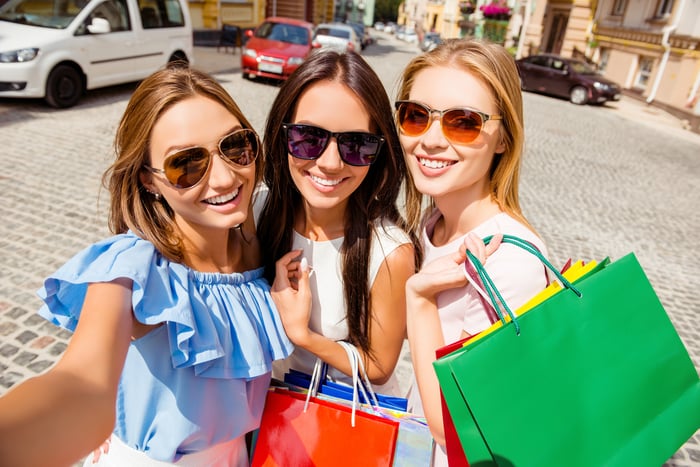 The discount market has been remarkably resilient in the past few years. Consumers who went down-market after the last recession discovered that the "treasure hunt" nature of finding bargains on name-brand goods was fun and have continued shopping in the off-price segment.

Burlington, TJX (TJX -2.17%), and Ross Stores (ROST -2.20%) have all exceeded expectations over the years, handily beating the competition and the market indexes. Yet none has done better than Burlington Stores. Shares of the retailer have soared roughly 600% since it went public in 2013. In comparison, the S&P 500 has returned just shy of 50%. 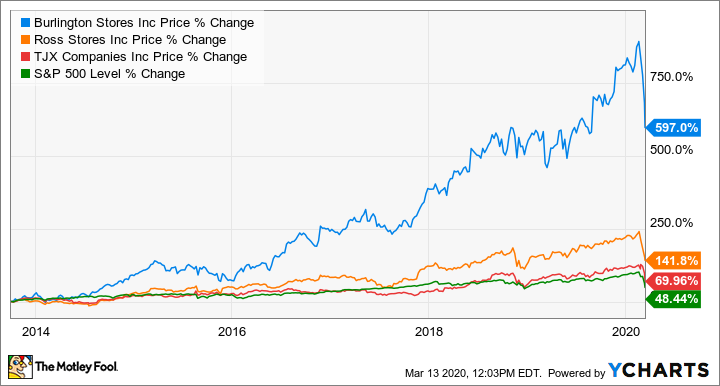 Even as the retail apocalypse has ravaged retail, forcing the closure of thousands of stores and sending numerous companies into bankruptcy, off-price retailers have been great growth stocks.

For the most part, off-price retailers haven't been relying on online sales for growth. While Burlington has had an e-commerce platform for a decade, it was a negligible part of its business, representing only 0.5% of total sales.

TJX only recently launched an e-commerce site for its Marshalls brand. (Its T.J. Maxx chain already had one.) Finally, Ross Stores has long dismissed the need for such a site. Its online portal merely points you to its stores.

The off-price market has become more competitive over the years, as department stores like Kohl's (KSS -0.61%), Macy's (M -2.71%) and others experimented with their own discount outlets. Nevertheless, Burlington Stores has realized that abandoning its e-commerce platform isn't a crazy idea, but actually something quite smart to do.

Off-price retailers are businesses in perpetual motion. Because their customers are always seeking out new goods through the vaunted treasure-hunt experience, the discounters rely on fast inventory turnover. Their buyers scour the market for order cancellations, manufacturer overruns, and closeouts, which allows them to have the latest fashions on hand.

That means their inventory turns much faster than at department stores. More importantly, they're able to convert their sales into cash quickly, which investors can check on via the cash conversion cycle (CCC).

Burlington's inventory turnover may be a little slower than either TJX's or Ross' (though much faster than Macy's and Kohl's), but it is a far more efficient cash conversion machine than any of its rivals.

Yet Burlington sees an opportunity to continue improving its inventory turnover, and management notes that inventory older than 90 days is at record lows. It believes it can become even more efficient by funneling additional resources into its stores instead of an e-commerce platform.

CEO Michael O'Sullivan told analysts on Burlington's recent earnings call that operating an e-commerce platform in the off-price segment, where unit prices average $12, is very inefficient. "E-commerce, when you fully account for the costs of merchandising, processing, shipping, accepting returns, it's very difficult, impossible to make money at those price points in the businesses that we compete in," he stated, according to a transcript compiled by S&P Capital IQ.

Even though e-commerce in general is growing and Amazon dominates the retail landscape, Burlington has also grown and gained market share. In short, Burlington doesn't need e-commerce to win, and in many respects e-commerce would be a hindrance to building on the 8% annual top-line growth its stores have achieved over the last three years.

So while it may appear odd for a company to seemingly go backward to a more analog time, doing away with its e-commerce platform is really the sustainable option for Burlington Stores.