Please ensure Javascript is enabled for purposes of website accessibility
Log In Help Join The Motley Fool
Free Article Join Over 1 Million Premium Members And Get More In-Depth Stock Guidance and Research
By Mark Prvulovic - Updated May 12, 2020 at 2:53PM

What's the verdict on this animal healthcare company?

While they might not represent the most exciting field in the biotech space, animal healthcare companies have been a steady, consistent source of growth in what's often a turbulent market.

One company in this area that's worth a look is IDEXX Laboratories (IDXX 1.65%). As one of the top providers of animal healthcare diagnostics and veterinary equipment, the company has witnessed a strong 2019. Shares of IDEXX rose by about 40% in 2019, and many expect that this trend will continue going forward.

Will 2020 also be a good year for IDEXX Laboratories? Here are a few reasons why it might. 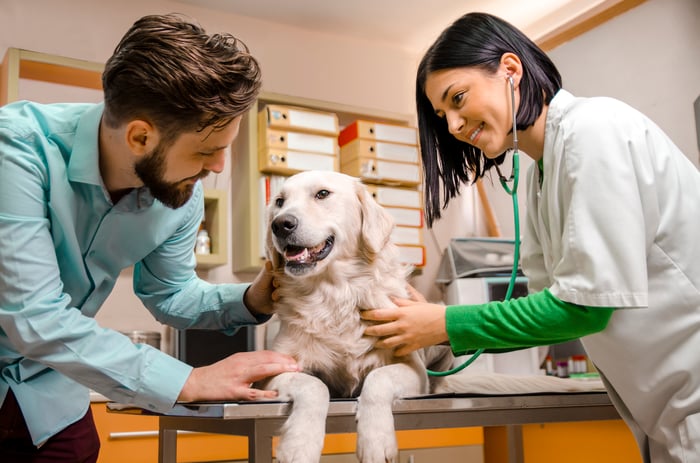 While some investors might overlook animal healthcare in favor of a more exciting niche, there's a strong case to be made for this sector. In America, pet ownership continues to grow, with about 67% of all American households -- or roughly 85 million families -- owning pets. That's a pretty big rise from the mere 56% reported back in 1988.

Not only is pet ownership increasing, but people are becoming all the more attached to their furry companions. About 95% of all pet owners consider their animal friends to be close members of their family, a figure that's also grown from the 88% who said the same back in 2007.

When we further break down the data into age groups, it's clear that younger generations are leading the way in pet ownership. According to IDEXX, 45% of all dog owners in the U.S. are millennials (people born between 1981-1996) or "Gen Z" (people born after 1997). This percentage is expected to increase to 58% by 2025.

All these things put together paint a picture of a very healthy, growing market. For the companies operating in this space, the future looks increasingly bright.

IDEXX Laboratories technically has three main business segments. First is its companion animal group, second is water, and third is its livestock, poultry, and dairy segment. However, companion animal group sales represent the lion's share of IDEXX's revenue, and they're what the company's best known for.

Products in this segment in-house analyzers (which include blood and urine tests) and laboratory reference services (which include pancreatic, cardiac, kidney, and parasite tests and screening). IDEXX also sells point-of-care testing devices (SNAP devices), which are designed to immediately test for a variety of conditions, including various viruses and parasites.

The company's in-house analyzers, as well as SNAP testing devices, are one-time purchases for their customers, which are primarily veterinary clinics and animal hospitals. In contrast, IDEXX's laboratory services provide a source of ongoing revenue. At the same time, IDEXX also offers consumables needed for in-house analyzers, so there's a recurring revenue component to the company's sales as well.

A strong record of financial growth

IDEXX has been doing well for itself financially, reporting respectable revenue growth over the past several years. Between 2015 and 2019, the company managed to report a strong 12% compounded annual growth rate, a figure that's been fairly consistent over the past 18 years.

In IDEXX's fiscal Q4 2019 results (which were released Jan. 31), the company reported decent results for the most part. Fourth-quarter revenue had grown to $605.4 million, up 10% in comparison with last year, driven almost entirely by the companion animal segment. Net income for the quarter was $90.5 million, a 5.6% increase in comparison to last year's $85.7 million.

The company's cash position still sits at a reasonable $90.3 million, though this is a decrease from the $123.8 million in cash and cash equivalents reported in Q4 2018. However, it's not a big reason to worry, because IDEXX is a profitable company -- unlike other biotech stocks, which need to rely on their cash to shore up their short-term losses.

When looking at IDEXX, it's hard not to compare it with another rival giant in the animal healthcare market. Zoetis (ZTS 3.22%) is about three times as large as IDEXX, with a market cap of $58 billion in comparison with IDEXX's $21 billion. Despite this, both companies seem to be priced relatively similarly, although Zoetis is a bit cheaper. The price-to-earnings (P/E) ratios for Zoetis and IDEXX are about 45.3 and 50.3, respectively.

Zoetis also differs from IDEXX in that its revenue sources are more balanced. Unlike IDEXX, where approximately 88% of its revenue comes from its companion animal business, Zoetis' revenue is almost perfectly split between its livestock and its companion animal businesses. Total revenue growth, however, is a bit slower than IDEXX's, coming in at just a 7% increase from Q4 2018.

It's hard to say whether IDEXX is a superior investment to Zoetis. While the former is more heavily focused on the companion animal market with a faster growth rate, the latter trades at a slightly cheaper valuation with more diversified revenue, although growth is slower.

If you're looking for a business with strong, consistently growing revenue in a defensive market that's resilient to economic downturns, IDEXX is a stock worth looking at. The animal healthcare market by itself is very appealing, and when coupled with IDEXX's strong financial track record, there's a compelling argument to be made in favor of this company.

While it's debatable whether or not IDEXX is the top stock pick in the animal healthcare market, what is clear is that this is a very healthy company with an excellent long-term outlook.