Please ensure Javascript is enabled for purposes of website accessibility
Log In Help Join The Motley Fool
Free Article Join Over 1 Million Premium Members And Get More In-Depth Stock Guidance and Research
By Rich Smith - Mar 15, 2020 at 8:58AM

Well, that was certainly surprising.

On Friday, President Trump made a national, televised announcement of a series of additional measures the federal government is taking in partnership with private industry to combat the novel coronavirus.

Calling the crisis a "national emergency," the President promised to unleash a floodgate of up to $50 billion in federal aid dollars to support "states and territories and localities in our shared fight against this disease." He promised to partner with private companies to accelerate development of tests for COVID-19, to turn retail parking lots into "drive-through" testing centers for the disease, and to cut red tape restricting doctors from practicing "telehealth."

Elsewhere in the economy, the President said the federal government will suspend collecting interest on student loan payments that it guarantees, and to increase purchases of oil for the Strategic Petroleum Reserve -- measures designed to keep more money in the hands of consumers, and to support oil prices and thereby energy companies, respectively.

The effects were immediately apparent, with stocks shooting up in the final hour of trading, as the Dow, the Nasdaq, and the S&P 500 all surged to close roughly 9.3% higher on the day. 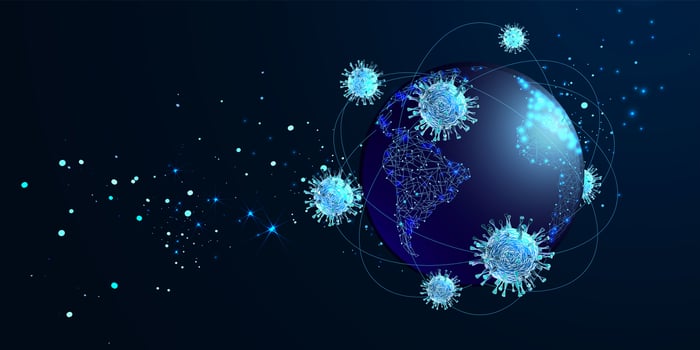 Nor were the effects limited to U.S. stocks.

Stocks centered in the U.S. certainly got their share of gains. Waste Management (WM 0.71%), for example, reversed its course from a loss earlier in the day to close Friday up 7.8%. But the effects of the President's pronouncement soon spread beyond U.S. borders. In Canada, for example, Canadian National Railway (CNI 1.60%) stock jumped 10%.

And even farther from U.S. shores, Indonesia's Telekomunikasi Indonesia (TLK 0.49%) enjoyed a banner day. Up more than 10% at one point, it still closed 7.8% higher -- on par with Waste Management.

Will these companies' shares hold onto their gains in the coming week(s)? Given that stocks seem to be reacting mostly to government pronouncements these days, rather than to what analysts say about them, or what the companies themselves have to say, that may depend a lot on what happens next in Washington.

In that regard, over the weekend the House of Representatives passed legislation offering free coronavirus testing, paid sick leave and family and medical leave, improvements to unemployment insurance benefits, and more social spending on food stamps, Medicaid, and other programs for low-income Americans.

Assuming the Senate approves the legislation and the President signs it into law, these measures should help to shore up the consumer economy. Next week we'll learn how well that gets reflected in the stock market -- both here and abroad.